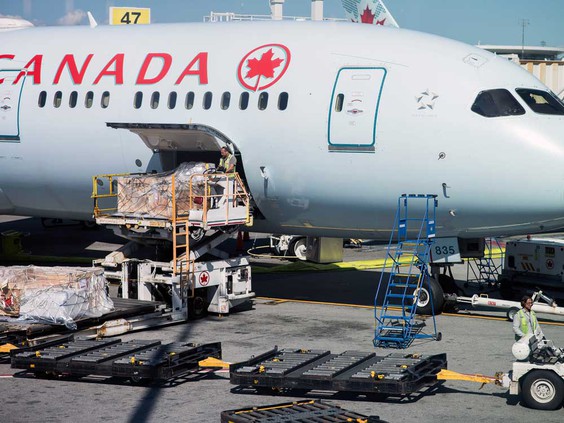 Air Canada shares closed down slightly Tuesday following a bout of morning volatility as investors digested the news that the pandemic-stricken airline had reached a multi-billion-dollar support deal with the federal government, which will take an equity stake in the company.

The shares opened up more than five per cent at $28.40, but almost immediately began to plunge and were down as much as six per cent at one point. They rebounded, however, to close at $26.92 — 0.3 per cent below Monday’s closing price of $27 in Toronto.

Analysts had a mixed but mostly positive reaction to the $5.9-billion bailout package, which includes low-interest loans and equity financing.

Konark Gupta, analyst at Scotiabank, wrote in a note to clients that while the relief package will significantly help future liquidity needs, “we believe some investors could be negatively surprised by equity dilution (up to 10 per cent) and a repayable loan for refunds.”

As part of the deal, the government will get a six-per-cent equity stake with the purchase of $500 million in shares at a price of $23.18 — a 15-per-cent discount from the stock’s Monday close.

“However, AC could also potentially utilize some of the low-cost debt to redeem some expensive debt raised during or prior to the pandemic, saving interest costs,” Gupta wrote. He maintained his rating of “sector outperform” but slashed the stock’s target price from $31 to $29.

The package includes a series of fully repayable loans that the company can draw on as needed, among them a $1.5 billion secured revolving credit facility and an additional $2.475 billion in three tranches of unsecured, non-revolving $825 million facilities with escalating interest payments.

Earlier reports indicated the government would fund a $9-billion support package for the whole aviation industry, Chiang wrote to clients. “AC had approximately 45 per cent market share pre-pandemic, so we expected a financing agreement of approximately $4 billion,” Chiang wrote in a note.

“Net-net though, we view this agreement in a positive light as it provides AC with a significant access to additional liquidity at favorable (sic) interest rates which should be more than enough as the Canadian airline sector begins to recover from the pandemic.”

As part of the government’s terms, Air Canada will have to refund tickets for passengers who had previously cancelled trips due to COVID-19, but did not get a refund from the airline. It can access up to $1.4 billion with a 1.211-per-cent interest rate, to provide refunds.

Fadi Chamoun, an analyst at the Bank of Montreal, said the “affordable” refund facility will buoy loyalty and increase customer confidence in future bookings. “We believe that it is good practice for an airline to refund customers for travel options that have been removed against their will,” he wrote in a note.

Air Canada will also have to restart regional routes it axed during the height of the pandemic, maintain or grow its April 2021 employee count and purchase 33 airplanes from Airbus’s Quebec facility.

Chamoun viewed the package as an overall positive for the airline and increased BMO’s target price  to $33 from $27.

Doug Taylor, an analyst at Canaccord Genuity, maintained a buy rating and target price of $28.

“While on the one hand, the added liquidity reduces the downside risk related to the timing and shape of the recovery, the additional dilution related to the equity and warrants also impacts the potential upside,” Taylor wrote to clients.

Before the pandemic, the company’s shares had been steadily trending upwards and peaked above $50 in January 2020.  They fell to just more than $12 in March last year, at the height travel shutdowns and border closures.

Why critics fear Bill C-69 will be a ‘pipeline killer’