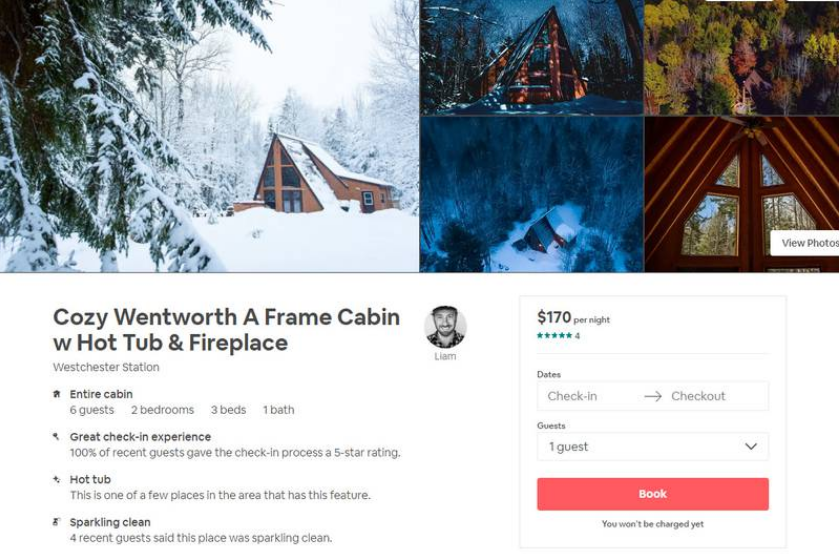 A Cumberland County Airbnb operator who was made aware of a significant tax hike on the rental of his cabin recently was likely the victim of an inadvertent click on the company app.

Liam Hennessey is the owner of a cabin in Wentworth that he rents out on a short-term basis through Airbnb, the global online hospitality service.

“We had a client make a booking in April for a date in May,” Hennessey said. “She paid the same amount as everybody else. On May 2, she called and wanted to add an additional night and wondered why the price was so high.”

Hennessey said the additional “occupancy tax” amounted to about $50.

Hennessey said he rents the cabin for $170 per night, for a minimum of two nights. Bookings and any documentation forwarded to customers are handled directly by Airbnb.

“We literally just get an email saying your place has been booked.”

When he was alerted by the customer about the extra charge, Hennessey did some digging and found that the secondary tax was not applied to a neighbour’s Airbnb accommodation.

Hennessey said he called Airbnb support, was passed off to four different people and forwarded links to inapplicable information.

“Then the conversation just stopped.”

Reached Thursday, Airbnb suggested the problem lay with the owner having activated a professional hosting tool on the company platform.

“If you’re a host, who has provided your business tax ID and relevant tourist tax registration info, you can collect taxes directly from guests by using our professional hosting tools,” the Airbnb website reads. “With this feature, you can set the type of tax and the way that you want to collect it (percentage, flat fee, or per guest per night).”

One of the tools provides the ability to collect HST (harmonized sales tax). Airbnb has listings all around the world and operators are prompted to put in the amount that can be collected. Airbnb does not have a tax collection agreement with Nova Scotia but it does collect occupancy tax or tax on lodging in Quebec, some Ontario locations and in British Columbia.

In Nova Scotia, then, no occupancy tax ought to be collected.

Hennessey’s predicament highlights the vagaries of the unregulated Airbnb business in this province.

On March 7, the provincial government introduced legislation to repeal the outdated Tourist Accommodations Act and replace it with a new registration act. Short-term accommodations providers, except those who rent in their primary residence, will be required to register through a simple online system.

Changes will take effect early in 2020.

Government is also proposing amendments to the Assessment Act to ensure small-scale operators will pay a residential property tax rate, rather than a commercial rate. The province will engage municipal partners to develop regulations that define a small-scale tourist accommodation establishment, including the maximum number of rooms.

Waye Mason, a regional councillor in Halifax and president of the Nova Scotia Federation of Municipalities, said the umbrella organization has not taken a stand on the Airbnb business model.

“The concern is that some people are using Airbnb to make their housing affordable,” Mason said.

“We are not really interested in having Airbnb used to make it so that large-scale business are being operated out of residential zones.”

Mason said he has heard, but not confirmed, that a south-end Halifax apartment building owner kicked 12 tenants out and turned the 12 units into Airbnbs.

“That guy is running a hotel now and he should be paying commercial taxes and that’s not allowed in a residential zone, anyway. At the other end is someone renting out an apartment for their friend when they are going back to Ontario in the summer as a student. Those are two different extremes. We have got to understand the problem better before we make any kind of regulations or changes.”

Airbnb regulation will be broached Thursday at a meeting of the Halifax Regional Municipality’s community planning and economic development committee.

In Cumberland County, chief administrative officer Rennie Bugley said rumours of a municipal tax on Airbnbs or any other tourist accommodations are unfounded but he said flat-lining provincial property assessments pose a challenge for municipalities that rely on property tax as a main source of revenue.

“The only discussion we had was looking at a financial sustainability strategy and we looked at a tax rate structure and we just had a discussion about can we tax people in a different way, can we levy additional area rates,” Bugley said.

Lowe’s is closing 34 ‘underperforming’ stores in Canada, including 26 Ronas