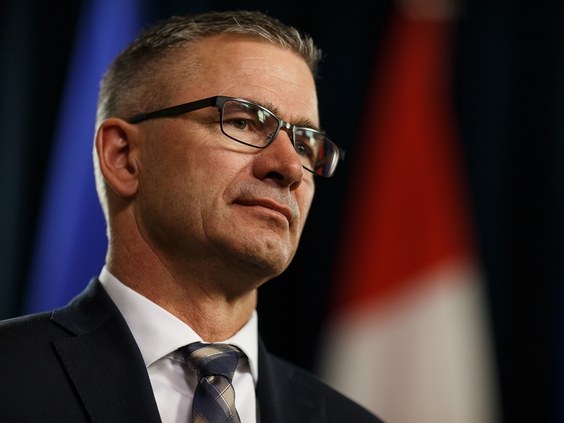 CALGARY — Alberta’s estimated massive budget deficit this year could mark a record for the province and could emerge as the largest deficit in percentage terms for any province in the country over the past 35 years.

Alberta’s government tabled a fiscal update Thursday that showed an expected budget deficit of $24.2 billion, which is 230 per cent, or $16.8 billion, higher than its previous budget for 2020/21 announced in February.

“Let’s face it, every single budget deficit number (within Canada and beyond) that we’re seeing tends to be shocking because they’re all numbers we’ve never seen before,” Porter said, but cautioned that “proportionately, Alberta’s is large. It’s the largest provincial deficit number as a share of GDP,” he said.

The $24.2-billion budget deficit is equivalent to roughly 8.1 per cent of the province’s GDP, making it the largest budget shortfall in the province dating back to the 1980s, according to BMO Capital Markets research.

By contrast, Saskatchewan also released a fiscal update Thursday showing a $2.1 billion deficit for the fiscal year, which amounts to 2.9 per cent of that province’s GDP.

Many economists had predicted Alberta’s economy would face one of the most severe challenges in the country following the pandemic but experts now say the deficit numbers in Alberta, Canada’s largest oil producing province, dwarf larger provinces when adjusted for population.

If Ontario, with 3.5 times Alberta’s population, had posted a similar deficit in its fiscal update, Canada’s most populous province would be forecasting a budget deficit of $88 billion, said Jack Mintz., University of Calgary School of Public Policy president’s fellow.

But Ontario announced on Aug. 12 that its budget deficit for the year is projected to jump to $38.5 billion, or about 4.5 per cent of its GDP.

As a result of multiple years of budget deficits and an expectation of further deficits to come, Mintz said Alberta’s overall debt and net debt figures are rising at a concerning rate.

“If you look at net debt, Alberta is now 20 per cent of GDP, which is still significantly lower than Quebec and Ontario and the Atlantic provinces but it may start now getting higher than Saskatchewan,” Mintz said.

“That net debt number is going to keep rising for a number of years,” he said, adding that as net debt rises the bond yields Alberta’s government will need to pay to finance its spending will rise, too.

The province’s total taxpayer supported debt is growing to $99.6 billion at the same time.

“Nearly all of government’s revenue streams have been negatively impacted by the COVID-19 pandemic and the global oil price crash, with total revenue forecast to be $38.4 billion, $11.5 billion lower than estimated,” Alberta Finance Minister Travis Toews said in the province’s Legislature on Thursday.

Toews said the fiscal update “illustrates the deep and wide-ranging impacts in Alberta of the COVID-19 pandemic, the OPEC+ dispute in the spring of 2020 and the government’s response to the serious health and the economic challenges that have ensued.”

Oil and gas receipts will be particularly hard hit in Alberta. The province had budgeted for $5 billion in non-renewable resource revenues this year but is now forecasting a 76 per cent drop in those revenues to just $1.2 billion.

As a result of the pandemic, which crushed global oil prices, investment in the oil and gas industry in Alberta is now expected to plunge by $8 billion, or 30 per cent lower this year, compared to the previous year, according the fiscal update.

As oil and gas represents Alberta’s largest industry, real GDP is expected to contract by 8.8 per cent. Exports from the province are expected to decline 13 per cent this year, compared with previous forecasts of 3.5 per cent growth in exports.

Asked during a press conference whether or not the province should look at additional taxes to increase its revenues, Toews said the province was focused on reducing costs and “delivering efficient government.”

“This is not the time to talk about raising taxes,” Toews said.

Shannon Phillips, the finance critic for the opposition NDP, said that 21 per cent of Albertans had requested mortgage deferrals in the pandemic, which was the highest percentage in the country according to Canada Mortgage and Housing Corp. data.

The province should be investing in additional spaces for schools to safely re-open and help Albertans manage the economic downturn and stop corporate tax cuts that were implemented this year to manage the economic fallout, Phillips said in the Legislature.

“There is a $24-billion deficit. There is not question that money is being spent but, in Alberta, it’s not being spent on you,” Phillips said.