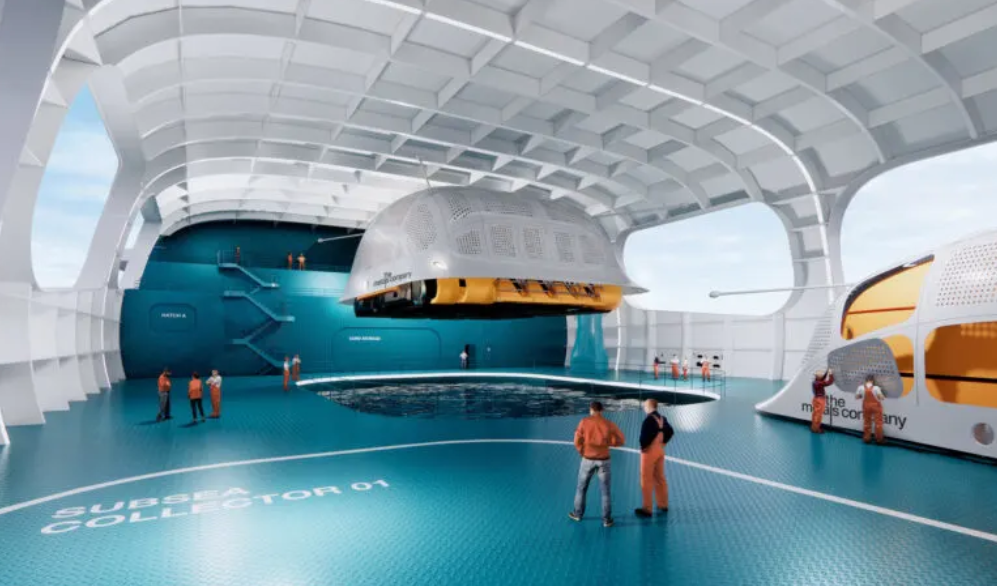 The celebrated architect was tapped to design robots and surface vessels for a company that hopes to extract precious metals from the depths of the oceans.

Deep at the bottom of the ocean, there are vast fields of metal that could be critical for the future of renewable energy. The polymetallic nodules, which resemble potato-like clumps, are rich in nickel, cobalt, copper, and manganese—several of the key ingredients in lithium ion batteries, which are used in electric vehicles and solar energy storage systems. They’ve been known since the 1970s to exist in some of the darkest depths of the ocean. A new venture is hoping to bring them to the surface.

The Metals Company, a Vancouver-based metals and deep-sea mining company, is working on a project that will collect these nodules from a location 2.5 miles deep in a part of the Pacific Ocean known as the Clarion Clipperton Zone. The metal nodules will be brought up and shipped to an onshore processing facility, where they will be separated out for use in the production of batteries and other metal products, primarily in the form of nickel, which is the primary component of lithium ion batteries. The company has hired the global architecture firm Bjarke Ingels Group to design the robotic vehicles and vessels they’ll use to scoop up and transport these metal nodules, as well as the processing plant.

“This is a new, disruptive industry. You don’t often get to [determine the design] of a big industrial process,” says Gerard Barron, CEO of the Metals Company. “Normally it gets started, and you’re trying to change it but it’s too late to change it, too many people are embedded. This was a chance to reimagine [it].”

Despite the name, clean energy vehicles take a toll on the environment, mostly because of the metals their batteries require. For example, lithium, a key component of batteries for electronics and vehicles, is mined at a scale of tens of thousands of tons every year. Most metal comes from deep inside the earth, which results in a shocking amount of waste and environmental destruction from the mining and smelting required to prepare it for use in batteries. Mineral demand for clean energy technologies is expected to quadruple by 2040, according to a recent report from the International Energy Agency. The Metals Company’s proposition is that mining the deep sea for these resources is a less destructive alternative, though some environmental groups have taken issue with deep-sea mining.

Ingels says his firm’s concept sought to bring a greater sense of design to the mining and processing of these metals as a way of acknowledging their importance to the future of life in an energy-consumptive society. Instead of industrial facilities that are purely utilitarian, he wanted the project to feel like it was meant to be seen, from a horseshoe-crab-shaped mining robot to ovoid surface vessels.

As in another BIG project, which used the roof of a waste-to-energy facility in Copenhagen to create an artificial ski run, Ingels says the design of the onshore facility aims to create a social place where school groups or members of the public can come to see the production process in action. “We had the chance to think about it holistically,” Ingels says.

The actual harvesting of the metal-rich nodules involves deep-sea robots that blow a jet of seawater to dislodge the rocks from the seafloor, sucking them up into the collector vehicle and then pumping them up to the surface through a long hose. A production vessel at the surface would then collect and sort the nodules, and then move them onto shuttle carriers that would ship them to one of the port-based production facilities the company hopes to build. Ingels says the robotic collector vehicle was designed with a gentle lip around its edges to control the blowing of sediment during the mining process, a feature that he says makes it look like “a friendly ghost gently hovering above the surface.”

Barron says The Metals Company is hoping to begin testing an early iteration of its harvesting vessel early next year and is in negotiations with a city near Houston for the potential siting of its first onshore production facility. Actual seafloor mining is estimated to begin in 2024, but the company will be going public by the end of the second quarter of 2021, according to Barron, who’s hoping that this will create a new infusion of funding to accelerate the project. “That gives us all of the resources needed to move to the other side of first production,” he says.

The electric vehicle battery market is expected to grow to more than $80 billion a year by 2026. the Metals Company plans to build 10 production vessels and estimates that this fleet could harvest more than 40 million tons of metals by midcentury. Barron says the environmental impact of mining this necessary material from the ocean is far less destructive than getting it from the ground. “When you start diving into the details, it frightens you,” he says. The global mining industry generates an estimated 190 billion tons of waste every year, including torn-up forests and the tailings left over after valuable minerals are extracted from the ore. Holding one of the black metal nodules on a recent video call, Barron says, “We can pick up these guys and generate zero waste and zero tailings.” The company claims its collection process disturbs about 5 centimeters of sediment on the ocean floor, affecting primarily bacteria.

Compared to terrestrial mining, deep-sea mining can be less destructive. But it’s not without environmental impacts, according to the International Union for Conservation of Nature. The organization declined to comment on the specifics of the Metals Company’s proposed project, but it’s wary of deep-sea mining in any form. “A wide range of scientific studies have concluded that deep-sea mining without serious harm is impossible. We haven’t seen any evidence that suggests otherwise from this project or others,” says Kristina Gjerde, IUCN senior adviser on the high seas.

Barron frames his company’s effort as an essential part of the global transition to renewable energy. “Certainly I’m of the view that extractive industries have to stop one day in the future,” says Barron. “But before that can happen, we need to have a massive injection of these important base metals in order to build batteries, because of course once they’re in the system, they will be recycled for generations to come.” For now, though, recycling batteries is still complicated.

The Metals Company has rights to explore for these metallic nodules on what it describes as 0.06% of the ocean floor, and its efforts are being sponsored by the island nations of Kiribati, Nauru, and Tonga—low-lying countries that are facing existential threats from climate change and sea-level rise. As members of the International Seabed Authority, their sponsorship is required for a non member to obtain exploration contracts, and they will receive royalties from  The Metals Company’s future production.

Hiring a high-profile architecture firm such as BIG is also part of the company’s effort to show that it can be a different kind of extractive industry. Ingels says the design was meant to counter the typically negative perception of industrial activity. “You can send an entirely different message quite easily by thinking a little bit more about the spatial and visual impact of how you put these elements together,” says Ingels. “For the entire onshore facility, we tried to just sit carefully and really understand the journey that the metals go through as they arrive in nodules and then get refined and separated into the different elements.”

U.S. lifts steel and aluminum tariffs on Canada and Mexico