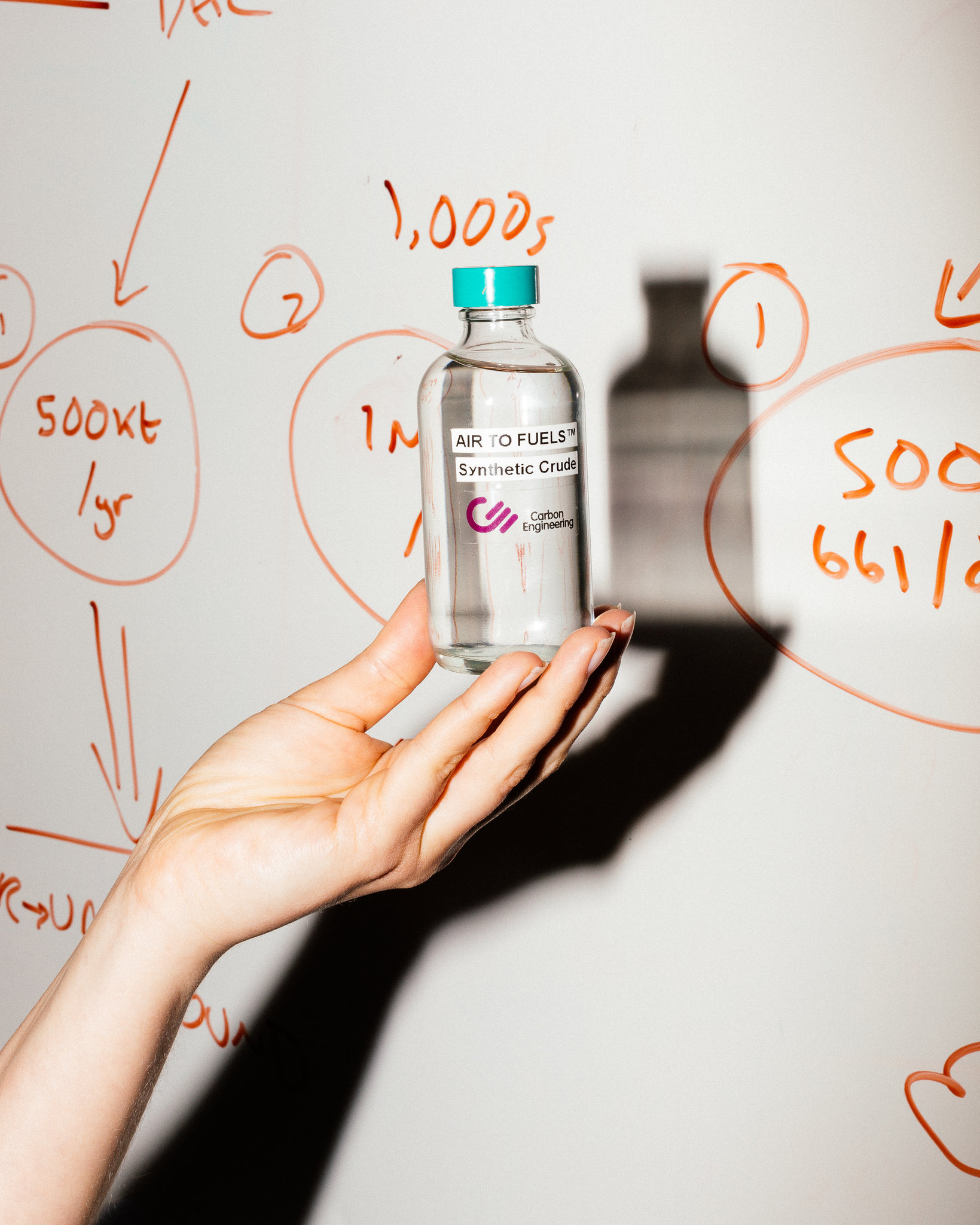 Everyone knows an electric fan can make people feel cooler on a steamy day. But could fans moderate the planet’s rising temperatures?

Some of the world’s biggest fossil fuel companies would like to find out.

Chevron, Occidental Petroleum and the Australian mining giant BHP this year have invested in Carbon Engineering, a small Canadian company that claims to be on the verge of a breakthrough in solving a critical climate change puzzle: removing carbon already in the atmosphere.

At its pilot project in Squamish, an old lumber town about 30 miles north of Vancouver, the company is using an enormous fan to suck large amounts of air into a scrubbing vessel designed to extract carbon dioxide. The gas can then be buried or converted into a clean-burning — though expensive — synthetic fuel.

Investing in Carbon Engineering and other carbon-reduction initiatives is part of an emerging effort by fossil-fuel industries to remain relevant and profitable in a warming world. With electric cars and solar and wind power becoming increasingly affordable, executives acknowledge that business as usual could put their companies at risk.

Already, fossil-fuel companies face a barrage of lawsuits, investor resolutions and regulations prompting them to invest more in clean energy. Advocacy groups are also pressing companies and lawmakers to keep oil and natural gas in the ground by challenging hydraulic fracturing, especially in Europe, and fighting pipelines meant to transport production from Canada’s oil sands.

“This is about recognizing that climate change poses significant risks to all economic sectors,” Fiona Wild, BHP’s vice president for sustainability and climate change, said about the company’s $6 million investment in Carbon Engineering. “Climate change is no longer seen as a fringe issue. It’s a business risk that requires a business response.”

Of course, big energy companies continue to drill for oil and gas and are pushing the Trump administration and other governments to open more territory to exploration.

But some businesses have signaled that they are changing. A few companies, including Royal Dutch Shell and BP, are linking compensation to emissions reductions. Equinor, the Norwegian oil company, plans to increase spending on clean energy to 15 to 20 percent of its capital investment by 2030, up from 5 percent now.

Carbon Engineering’s pilot on the rocky shores of Howe Sound is one of several carbon “direct-air-capture” ventures being attempted around the world. It is still a small effort, but its backers say it could play an important role in arresting climate change.

Much of the work is done in an old industrial warehouse of corrugated metal adorned with faded graffiti, a structure once used by a company that made chemicals for the pulp industry. The temporary offices are decidedly makeshift, with the bathrooms entered from outside. No carbon is actually being pulled out of the atmosphere permanently because the company is still in testing mode.

Chevron and Occidental, which have each taken seats on Carbon Engineering’s board, refused to disclose their investments. The company says it raised a total of $68 million in its most recent funding round to expand the pilot and develop its first commercial plant.

Critics of fossil-fuel companies say such investments are so modest as to amount to little more than a public-relations stunt.

“That’s chump change for these guys,” said Dan Becker, director of the Safe Climate Campaign, an environmental organization in Washington. “I don’t see any epiphanies.”

But other experts disagree. “It could be greenwashing, but so what?” said Dieter Helm, a professor of energy policy at Oxford and the author of “Burn Out: The Endgame for Fossil Fuels.” “If money is being spent on research and development to develop ways to sequester carbon, that is a good thing.”

Executives at Carbon Engineering said they welcomed investments by fossil-fuel companies not only for the money but also for their engineering and lobbying skills.

“I have great big brothers now who are looking after me,” said Steve Oldham, Carbon Engineering’s chief executive. “Initially companies wanted to show that they were thinking of being green. Now you are seeing action.”

The company said its commercial plants would have banks of large fans, 33 feet in diameter, to collect air and run it through a complex chemical process.

Removing Carbon Dioxide From the Air

Carbon Engineering, a small Canadian company, has developed methods to remove carbon dioxide from the atmosphere using “direct-air-capture” technology. It is one of several companies around the world working on the technique. The carbon dioxide may be reprocessed into fuel, or buried for disposal.

The carbonate solution is converted into small, dry pellets of calcium carbonate.

The calcium carbonate pellets are heated until they break into their component parts — pure carbon dioxide gas and solid lime, or calcium oxide.

Water is added to the calcium oxide, and the resulting slurry is returned to the pellet reactor, to regenerate the hydroxide solution used in the process.

Large fans draw in air, which is run through a mesh coated with a hydroxide solution. The hydroxide binds with the carbon dioxide to convert it into a carbonate solution.

The air will be pushed through honeycombed plastic channels coated with potassium hydroxide that attaches itself to carbon dioxide. More chemicals will be added to produce tiny white pellets containing carbon. The pellets will then be heated to more than 1,600 degrees to form carbon dioxide gas.

In one kind of plant the company hopes to build, the captured carbon dioxide could be injected underground, where it would be harmless unless some of it leaked back into the atmosphere. Mr. Oldham asserts that each such installation could eventually take as much carbon dioxide out of the atmosphere annually as 40 million trees.

In another kind of facility, captured carbon dioxide would be combined with hydrogen extracted from water to make synthetic fuel that can be processed into gasoline, diesel or jet fuel. The energy needed to produce hydrogen would come from wind turbines and solar panels to limit emissions.

The company’s synthetic fuel would be more expensive than conventional gasoline. Production costs could be about $4 a gallon, according to Carbon Engineering, compared with more than $2.70-a-gallon average retail price in the United States. But it could still be attractive to countries that spend tens of billions of dollars on crude imports, like India and Japan. Regulations taxing carbon could also make the fuel more attractive.

The company says its synthetic fuels could be used in standard car, truck and plane engines, and would cause less air pollution than traditional fuels.

Burning Carbon Engineering’s fuel would release carbon dioxide, but it would not increase greenhouse gases in the atmosphere by much or at all because the process would be recycling carbon that was already in the air, executives said.

Early investors in Carbon Engineering include the Microsoft co-founder Bill Gates and N. Murray Edwards, executive chairman of Canadian Natural Resources, a big producer of oil sands, a heavy oil that has a large carbon footprint.

“Oil and gas companies have to wonder about their future,” said Michael Webber, an energy professor at the University of Texas at Austin. “They know that someday the energy mix will be different. So there are a lot of motivations for this investment.”

Occidental wants to use the technology to find a sustainable supply of carbon dioxide that it can use to inject in its oil fields to increase pressure and extract more oil while also sequestering the carbon. The company is already the largest injector in the industry, but it now re-injects carbon that was found in natural underground deposits — providing little or no environmental benefit. By recycling carbon taken from the air, it hopes to bury as much carbon as its fuels emit, or even more. As an added benefit, there is a federal tax credit for sequestering carbon.

“Every oil company should be striving to become carbon neutral,” said Vicki Hollub, Occidental’s chief executive. “Ultimately, we think we can be carbon negative. Addressing climate change is a turning point for the industry.”

Chevron is seeking to meet a different immediate need. California requires refiners and other distributors to meet progressively declining targets of carbon in their fuels through 2030. Chevron, which is based in San Ramon, Calif., has two big refineries in the state that could use the synthetic fuel.

“We have a need for low-carbon fuels,” said Barbara Burger, president of Chevron Technology Ventures. “The world needs transportation fuels and the public desires them, but they have an expectation that we lower the carbon content. And this is one of the options to do that.”

But ramping up the ambitious ideas put forward by Carbon Engineering and other companies into projects large enough to have an important environmental impact will take considerable investment.

Mr. Oldham said one of his carbon capture and sequestration plants would remove one million tons of carbon dioxide from the atmosphere annually, a small fraction of the more than 33 billion tons humanity emits in a year. The sequestration process would cost roughly $100 per ton, which in Occidental’s model could be offset in part by the increased oil production it would enable. The carbon could also be used to make cement and other building materials.

But in case of an acute global climate emergency, governments would probably have to step in to hasten removal of carbon from the atmosphere. Mr. Oldham said the cost of capturing and sequestering all the carbon needed to stop climate change would require trillions of dollars.

The company’s synthetic fuel could also struggle to find markets because of its cost.

David Keith, an applied physicist at Harvard who founded Carbon Engineering and sits on its board, said the synthetic fuel would be most useful for trucks, ships and planes, while cars and other smaller vehicles would more likely be powered by batteries in the future.

“There is no way we are beating oil from the ground in a head-to-head competition without regulation,” Mr. Keith said, referring to carbon taxes and other environmental policies. If there is sufficient political will to deeply cut emissions, he added, “I think you will see a large amount of this technology in the next decade or two.”