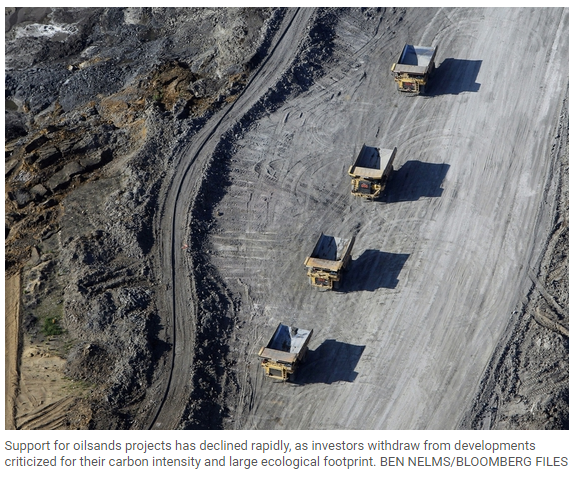 Output at controversial assets to increase even as government seeks to cut emissions, minister says

Canada’s government has vigorously defended the country’s oil industry and its controversial oilsands projects, even as it seeks to drastically cut emissions.

“There is no way we are reaching net-zero without Alberta,” O’Regan said in an interview, referring to the country’s 2050 emissions target.

O’Regan’s comments underlined the awkward challenge for Trudeau’s administration, which has championed climate change initiatives on the international stage but remains heavily dependent on oil revenues at home.

“Our prosperity and our economy are still highly dependent on it,” O’Regan said. “It is what we do.”

Even within the international oil business, support for oilsands projects has declined rapidly, as investors withdraw from developments criticized for their carbon intensity and large ecological footprint.

Last month, supermajor Total SA wrote off US$7 billion of its oilsands assets and indicated it would be willing to sell them, while Deutsche Bank said it would no longer finance oilsands developments. Royal Dutch Shell Plc. sold almost all of its Alberta oil sands interests in 2017, as did Norway’s Equinor ASA, and in February, local developer Teck Resources Ltd. scrapped plans for a giant US$15-billion project.

Canada is the world’s fourth-largest oil producer and expects to continue to increase output even as it seeks to cut total emissions. Crude production fell sharply earlier this year as the oil-market crash forced operators in Alberta to cut spending and sack workers. But O’Regan said Canadian output, now 4.4 million barrels a day, would recover to 5.5 million bpd by the middle of next year and continue to rise in the longer term, supported by new export infrastructure.

Proposed pipelines from the landlocked projects in northern Alberta — including TMX, an expansion of infrastructure to Vancouver now owned by the federal government, and Keystone XL, a plan to ship bitumen to Texas — are considered crucial to longer-term oilsands production growth.

The construction of the pipelines has so far been stymied by legal challenges brought by Indigenous groups and other opponents. U.S. President Donald Trump’s support for Keystone XL has also failed to advance the project.

O’Regan said Ottawa’s support for these pipelines was “a national unity issue,” adding that a recent Supreme Court decision confirming the federal government’s approval of TMX was “huge.”

Soaring global oil prices earlier this century triggered an investment boom in Alberta, as international investors poured billions of dollars into new oilsands projects. Much of that interest has reversed since 2015, due to lower prices and concerted environmental opposition.

O’Regan acknowledged that Canada’s oil sector faced a growing problem. “Our worst-case scenario would be if a portfolio manager sitting at the end of this table looks at his juniors and says, ‘What are we doing on climate change?’ And one just said, ‘we’re getting out of Canadian oil and gas’…And you become the box-check. That’s what we’ve got to combat.”

Although Trudeau said last year that the country would exceed the 2030 emissions targets it set as part of the Paris climate accord, the UN said in November that Canada could miss the mark by at least 15 per cent.

O’Regan argued that the oil industry could help to reduce emissions even as it increased production.

“What I say in Alberta is that it is incredible in the past 30 years, you’ve managed to find a way to draw oil out of sand,” he said. “Now we need to tap into that innovation and ingenuity to make a thorough transition to a lower-emitting economy.”

An energy transition would be “messy” and needed continued investment and popular approval in oil-producing provinces like Alberta and Newfoundland, O’Regan said. “It is not easy for a country that touted itself as an energy superpower. Now we’ve got to become a green energy superpower.”