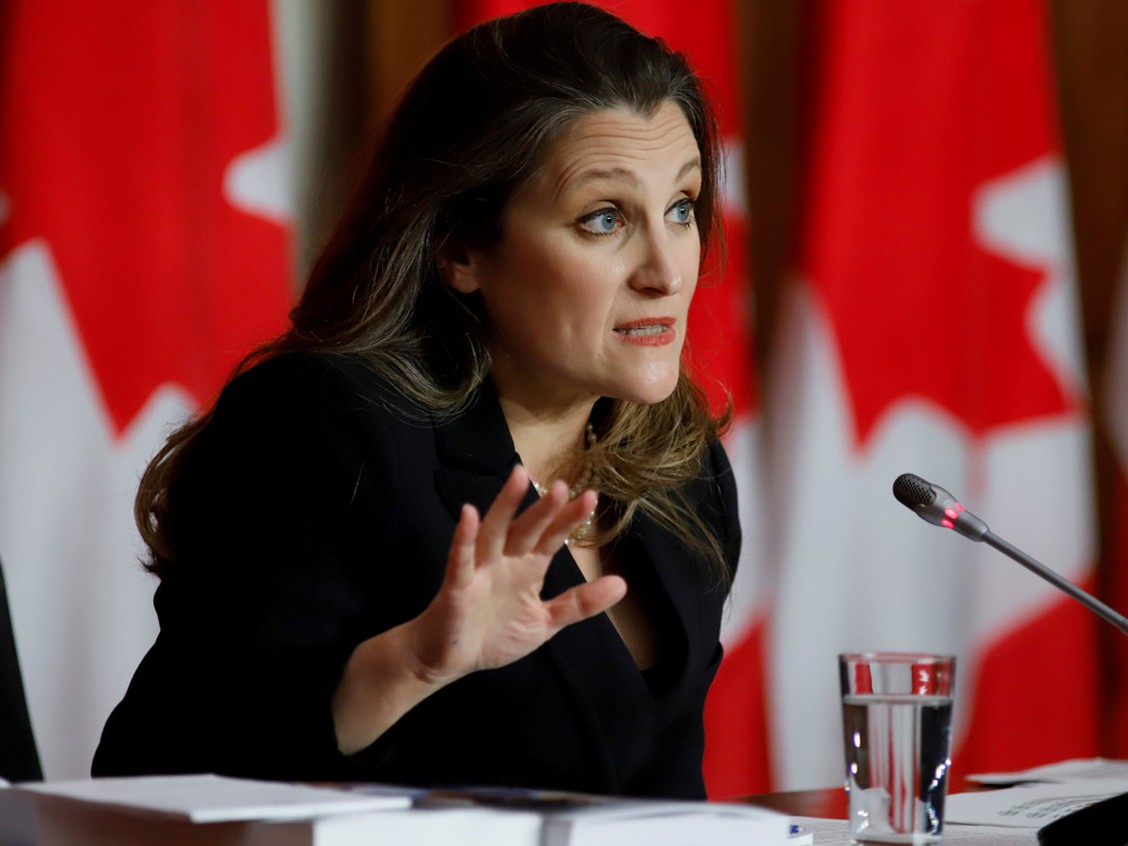 Documents show Finance Minister Chrystia Freeland is weighing pitches from stakeholders in Toronto and Montreal — including Toronto Mayor John Tory and Montréal International — pushing for the International Sustainability Standards Board (ISSB) headquarters to be established in their respective cities.

Stakeholders in Toronto and Montreal are vying to host the global headquarters of a new organization that will set international standards for financial reporting and accounting practices related to climate change. Backers of the effort hope the office could help establish Canada as a serious participant in the global effort to account for the impact of climate change on the economy.

“Launching a bid and securing the global headquarters for the new [ISSB] would be global recognition of Canada’s commitment to sustainable business practices and climate change,” reads a memo from Chartered Professional Accountants (CPA) Canada, which is leading the country’s bid.

Spearheading the ISSB is the International Financial Reporting Standards Foundation (IFRS), a U.K.-based non-profit that develops global accounting standards, which are followed by 140 countries. The organization is leading an international effort to streamline climate-related reporting and accounting practices, as more investors and regulators increasingly expect companies to disclose and mitigate their risks related to climate change.

Navigating how to gauge and report climate risk is complicated by the dizzying slate of disclosure options to choose from. The forthcoming ISSB will be directly responsible for standardizing the process. It would also “contribute to international collaboration, cooperation and coordination among sustainability-reporting bodies, governments, regulators and other stakeholders,” according to a consultation paper by the IFRS.

Backers of the effort hope a Toronto or Montreal headquarters could help establish Canada as a serious participant in the global effort to account for the impact of climate change on the economy. “The office will significantly influence how business is done around the world,” said Juvarya Veltkamp, director of the Canada Climate Law Initiative. “For Canada, there would be reputational benefits and that halo effect if we hosted it here.”

Canada has made some moves towards improving how companies and investors disclose the real and potential risks of climate change on their operations, including a $7.3-million commitment from the federal government for a Sustainable Finance Action Council tasked with finding ways to enhance climate disclosure and more clearly define sustainable investing. But critics say Canada lags peers like the U.K. and the European Union — which already have plans in motion for mandatory disclosure — in part because of its fragmented financial regulatory structure. Veltkamp noted that while Europe may be leading on financial climate disclosure, placing the headquarters in Canada could be an “olive branch,” she said. “It gives us a way to come together internally so we can contribute to [forthcoming] international targets.”

Freeland did not answer questions about the bid for the headquarters, including whether she had selected a city to endorse. “The Government of Canada supports the IFRS Foundation’s proposal to create the International Sustainability Standards Board (ISSB), which would develop and maintain global sustainable reporting standards,” said communications adviser Marie-France Faucher on behalf of the Department of Finance. “Establishing these global standards would promote more consistent, comparable, and useful disclosure in relation to environmental, social, and governance factors.”

Federal lobbying records show CPA Canada has met with government officials 81 times in the past six months to discuss a range of topics, including “seeking financial commitments to support Canada’s potential role in supporting the implementation of possible global sustainability standards by the [IFRS].”

The accounting organization is also lobbying the Quebec government, seeking $2 million over three years if Canada wins the ISSB bid, according to records dated May 25. The money would come from the province’s Financial Education, Awareness and Research Strategic Partnerships Program. There are no records of CPA Canada lobbying Ontario for the office, and CPA declined to elaborate to The Logic on its communications with government officials in either province.

Montréal International and Finance Montréal — organizations that promote economic development in the region — are leading the campaign to have the finance minister select Montreal for the headquarters. The organizations have been working on Montreal’s bid for the past eight months, Céline Clément, communications director for Montréal International, told The Logic. Clément noted that the city has the third-largest concentration of international organizations in the Americas, after New York and Washington. “Furthermore, Montreal has deep roots in sustainable finance and its responsible-investment ecosystem is thriving.” She would not say whether a bid has been submitted or who else is endorsing Montreal’s application, citing “competitive reasons and out of respect for the trustees, who will have to choose the place of establishment.”

Meanwhile, Toronto Finance International (TFI) is leading the charge to see the financial hub clinch the headquarters. “As you are aware, Canada has an excellent opportunity to host the ISSB due to the strong support from the public and private sector and Canada’s strong track record of working with global institutions on sustainability and standard setting,” reads a letter from TFI to Freeland dated July 7. The letter notes that TFI “and many of our stakeholders” have agreed to commitments” for the ISSB headquarters. “[We] hold the view that it is of considerable importance to select the City of Toronto as the location for the new headquarters,” the letter reads, adding that the country’s “capital markets and corporate-reporting ecosystem” are “largely based in Toronto, which is clearly Canada’s financial capital.” TFI did not respond to The Logic‘s questions, including what commitments its stakeholders have made related to the headquarters.

The IFRS declined to answer The Logic’s questions, including which jurisdictions it’s considering for the headquarters and when a decision will be made. The organization expects to have a chair and vice-chair, and possibly a full board, named in time for the highly anticipated UN Climate Change Conference in Glasgow this fall.

Huge state aid is dragging Canada out of worst-ever contraction