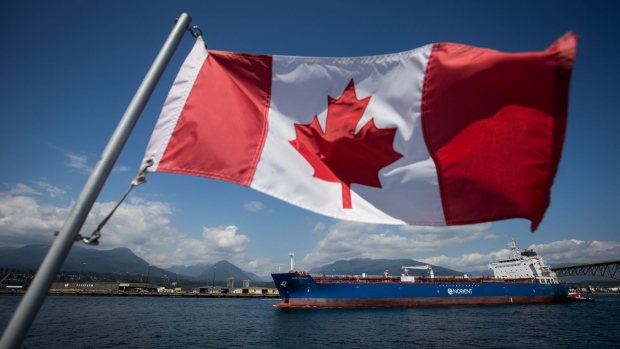 OTTAWA — Canada posted a merchandise trade deficit of $137 million in December to end a run of six consecutive monthly surpluses, but finished the year with an annual surplus for the first time since 2014.

Statistics Canada said the result for December came as imports rose and exports fell in the final month of the year and followed a surplus of $2.5 billion in November.

For the full year, the agency said the country posted an annual trade surplus of $6.6 billion, its largest since 2008.

Imports for December rose 3.7 per cent to a record $57.7 billion, helped by a 16.2 per cent gain in electronic and electrical equipment and parts. Imports of motor vehicles and parts also rose 5.1 per cent.

Meanwhile, exports fell 0.9 per cent to $57.6 billion in December as exports of energy products fell 5.9 per cent.

Crude oil exports fell 5.0 per cent due to a drop in prices, while coal exports dropped 33.5 per cent due to disruptions in freight transportation in B.C. due to the flooding and landslides.

Stephen Brown, senior Canada economist at Capital Economics, said there are two reasons he expects Canada to move back into a monthly trade surplus very soon.

“First, the sharp rise in oil prices so far this year will cause a renewed pickup in energy export values,” Brown wrote in a report.

“Second, as motor vehicle export volumes were still 13 per cent below their pre-pandemic level in December, whereas imports were just four per cent lower, there seems to be greater scope for exports to outpace imports as motor vehicle production rebounds further.”

Statistics Canada said Canada’s trade surplus with the U.S. narrowed $8.1 billion in December compared with $9.5 billion in November as exports to the U.S. fell 1.4 per cent and imports from the U.S. rose 2.1 per cent.

Meanwhile, Canada’s trade deficit with countries other than the United States grew to a record $8.2 billion in December compared with $7.0 billion in November.