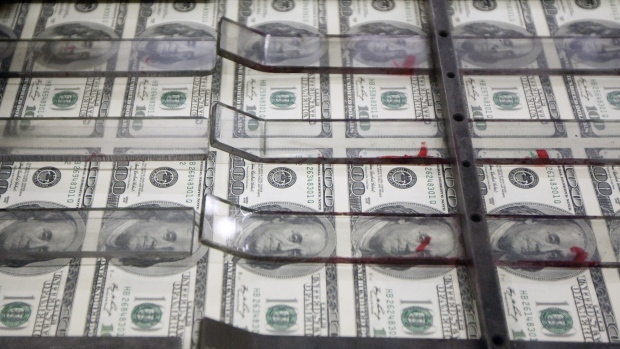 Canada plans to sell three-year U.S. dollar-denominated bonds in its first transaction in the currency in over a year and one day after Province of Alberta issued in the world’s largest debt market.

The top-rated North American nation is marketing the notes at a spread of around 12 basis points over similar duration U.S. Treasury bonds, according to people familiar with the matter. Canada last sold greenback-denominated bonds in November 2017 when it raised US$3 billion by issuing 2022 bonds at a spread of 9 basis points over Treasuries, according to Bloomberg data.

“Government of Canada’s securities issued in non-Canadian dollar reflects the need to maintain FX reserves allocations, rather than it being about tapping other markets from a demand-only perspective,” said Ian Pollick, head of rates strategy at Canadian Imperial Bank of Commerce. “This helps to promote the availability of foreign currency that is required in day-to-day usage.”

Bank of America Merrill Lynch, Bank of Montreal, Citigroup Inc., National Bank of Canada and Royal Bank of Canada are managing the transaction, said the people. The deal may be priced as soon as Thursday, subject to market conditions.

“Issuing a global bond provides funds to supplement and diversify Canada’s foreign exchange reserves,” the Canadian government said in a statement in its website Wednesday.

Canada is returning to the dollar market one day after Alberta raised US$1.75 billion of five-year bonds at 45.9 basis points over the U.S. Treasury bonds due Dec. 2023. In the Canadian dollar domestic market Quebec and Ontario raised $1.25 billion in separate 10-year bond issues priced Wednesday.

Separately, Mexico is issuing US$2 billion of 10-year bonds at a spread of 185 basis points, people familiar with the deal said Wednesday.