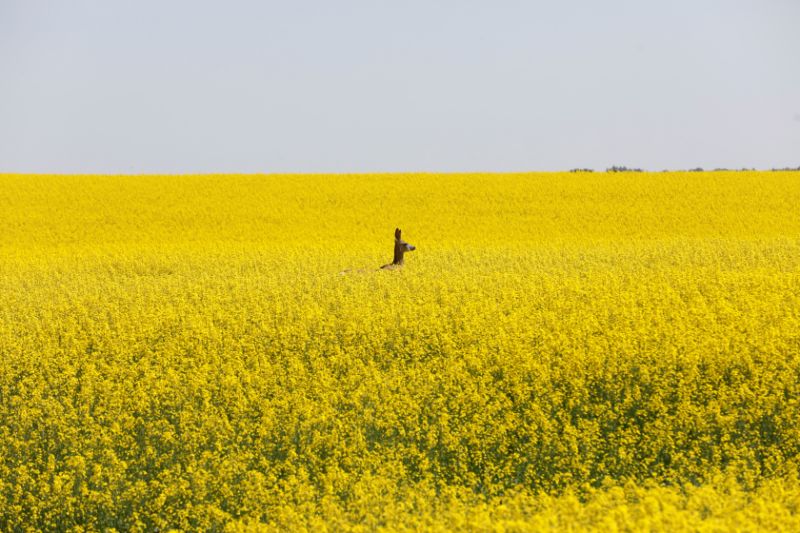 A deer feeds in a western Canadian canola field that is in full bloom before it will be harvested later this summer in rural Alberta, Canada July 23, 2019. REUTERS/Todd Korol

Canada has turned to the World Trade Organization in the hopes of resolving its dispute with China over a ban on canola exports.

Trade Diversification Minister Jim Car issued a statement Friday saying that Canada is seeking bilateral consultations at the WTO, which he said “is the usual next step when direct engagement does not lead to resolution.”

“(Agriculture Minister Marie-Claude) Bibeau and I take this file very seriously and we know that this is a difficult time for those farming families affected,” Carr said in a statement.

“We stand by our robust food inspection system and will continue to keep farmers, producers and other stakeholders informed of our progress.”

China had initially halted canola shipments from Richardson International, Canada’s top exporter of canola seed, in March citing the discovery of pests. The ban has since expanded, with the Canola Council of Canada saying Chinese importers are unwilling to purchase canola seed from any exporters.

China is one of the most critical markets for Canadian canola producers, taking in approximately 40 per cent of canola exports. The total value of canola exports to China in 2018 amounted to $4.4 billion.

The Canola Council, which represents growers, processors and exporters, released a statement on Friday supporting the Canadian government’s decision to escalate the dispute at the WTO.

“We’re disappointed that this action needed to be taken, but it is a necessary step to help determine the legitimacy of China’s trade measures,” Canola Council president Jim Everson said in a statement.

“China has an obligation to explain the scientific basis for its actions as part of its commitments to World Trade Organization rules. We need to consider all options to support predictable, rules-based trade, a critical requirement for Canadian agriculture.”

The Canola Council said that prices of canola have fallen approximately 10 per cent since March, when the ban was first issued, which amounts to a $1 billion loss.

The canola dispute is one of several trade and diplomatic disputes that have escalated in recent months as relations between Canada and China remain frayed following the arrest of Huawei Technologies executive Meng Wanzhou.

In June, China banned the export of Canadian beef and pork products saying that customs authorities found residues of a restricted feed additive in a batch of pork products. This week, the Canadian Meat Council said it has suffered $100 million in losses since the June suspension, and called on Ottawa to clarify its strategy to reopen the Chinese market.

This week, Canada appointed business leader Dominic Barton as its new Ambassador to China, with the hopes that the appointment will help ease tensions between the two countries.

Update From the Office of the Minister of Small Business, Export Promotion and International Trade