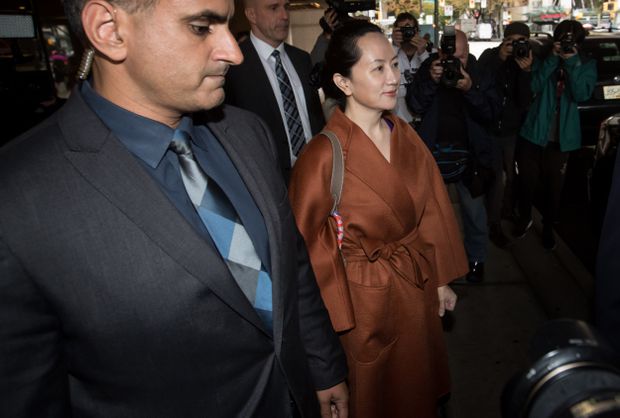 Lawyers for Canada’s Attorney-General say the request by Meng Wanzhou’s legal defence team for more disclosure related to her arrest is a futile “fishing expedition” in hopes of proving that Canadian and American authorities conspired to gather more evidence inappropriately.

The Huawei executive’s defence team has been arguing for the disclosure of additional evidence relating to her arrest at Vancouver International Airport on Dec. 1 in an effort to show authorities engaged in a “covert criminal investigation” that violated her Charter rights.

In a submission filed in B.C. Supreme Court last week and released to media on Monday, the Attorney-General, acting on behalf of the United States, argued that Ms. Meng’s team has already received extensive disclosure. Further, the submission said the latest application does not pass a legal test that an allegation has to have an “air of reality” to obtain further disclosure.

The document alleges the application is “a fishing expedition for materials” by Ms. Meng’s defence team in hopes of revealing a “speculative conspiracy.”

Ms. Meng is accused by the United States of providing misleading information to foreign banks regarding the nature of the relationship between Chinese telecom giant Huawei Technologies Co. Ltd. and Skycom Tech Co. Ltd., which the U.S. Department of Justice calls a subsidiary that sold telecommunications equipment to Iran.

U.S. prosecutors say that placed those banks at risk of violating U.S. sanctions through the money they handled. According to the indictment against Ms. Meng, one of the banks in question cleared more than US$100-million of Skycom-related transactions through the United States between 2010 and 2014.

Evidence that has already been provided to Ms. Meng’s team includes audio of the arrest, video of Ms. Meng at the airport and handwritten notes and solemn declarations of the officers. The defence team is asking for more, including but not limited to notes, e-mails and texts between the Canada Border Services Agency (CBSA), the RCMP, the U.S. Department of Justice and other U.S. authorities.

In its reply to the Attorney-General’s submission, Ms. Meng’s legal team countered that the disclosure to date shows there is, in fact, an air of reality to the abuse-of-process allegations. Previous disclosures revealed new information, including people who had not previously been mentioned.

The reply also alleges there was a strategy by authorities to recast events, citing a set of handwritten notes from an assistant to the vice-president of the CBSA related to how the arrest would be portrayed.

Items in the notes included: “Did CBSA have the authority to hand over her stuff to the RCMP?” and “for outsiders/lawyers looks like may have been collusion even if not.”

At a disclosure hearing on Monday, Richard Peck, one of Ms. Meng’s lawyers, told the court that the CBSA and RCMP collaborated and arranged a plan to deal with Ms. Meng in a way that violated the provisional arrest warrant.

“This plan delayed the implementation of Ms. Meng’s rights and afforded the CBSA an opportunity to interrogate her and, as such, information was arranged and shared with the RCMP and the FBI,” Mr. Peck said.

The disclosure hearing is expected to last several days.

Ms. Meng appeared in court on Monday, taking on a different demeanour from previous appearances. In the past, she was quickly rushed from home to vehicle to courtroom; on Monday, photojournalists were given advance notice before Ms. Meng emerged from her home, she stopped to chat with well-wishers outside the courtroom and she thanked media for attending the proceedings.

Whereas she previously wore plain, dark athletic wear to court, Ms. Meng on Monday wore a purple dress and high-heeled shoes and carried an Hermès handbag.

She was accompanied by an interpreter and took notes during the proceedings.

Her extradition hearing is set to begin in January.

Why cryptocurrencies wouldn’t be a risk to the financial state

A year of misfortune: How the global pandemic has battered N.L.’s oil and gas industry