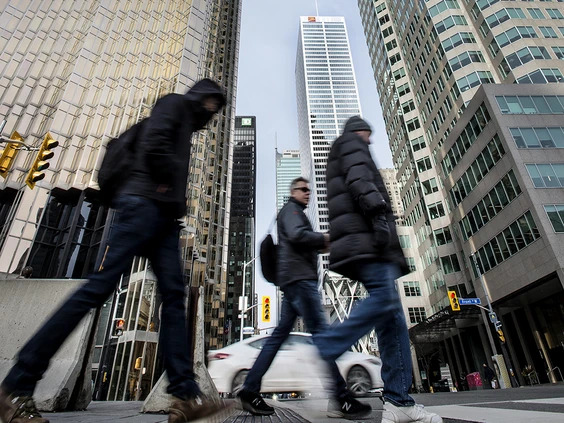 Kevin Carmichael: Economy is cooler than forecasters thought, but it’s still too hot for the Bank of Canada’s liking

Canada’s gross domestic product increased at an annual rate of 3.1 per cent in the first quarter, compared with a revised rate of 6.6 per cent over the final three months of 2021, Statistics Canada said on May 31. Here’s what you need to know.

The Bank of Canada last month predicted first-quarter growth would come in at an annual rate of three per cent, and it reckons Canada’s “potential” growth rate — the pace at which the economy can expand without stoking inflation — is about two per cent. So, yes, 3.1 per cent is a pretty good number.

For what it’s worth, Bay Street’s average forecast ahead of the release was for growth of about five per cent, so there will be some disappointment, or maybe relief, considering growth at that pace would continue to fuel worries that the central bank had lost its grip on inflation. The Bank of Canada has been struggling to get a read on prices, but it appears to have a better idea of what’s going on with GDP.

What drove the increase?

Household spending increased for the third consecutive quarter, and business investment on non-residential structures and machinery and equipment increased nine per cent from the previous quarter, Statistics Canada said.

Consumer spending isn’t a surprise, because the labour market is red hot and households have lots of pent-up demand after two years of living in various states of pandemic lockdown. There is probably room for yet more growth, since Statistics Canada observed that spending on automobiles and services remains below pre-pandemic levels.

Continued strength in business investment is a positive sign, as it suggests companies are ramping up to keep pace with demand, which could eventually put downward pressure on inflation. Investment in non-residential structures and machinery and equipment has now grown strongly since the second quarter of 2021.

Residential construction rose for a second consecutive quarter, led by a 9.3 per cent surge in spending on renovations from the fourth quarter.

What does it mean for inflation?

The economy is cooler than many forecasters thought, but it’s still too hot for the Bank of Canada’s liking. The latest GDP numbers confirm the central bank’s assessment that demand has exceeded supply, justifying its decision to take a relatively steep path to higher interest rates. Policymakers have telegraphed that they intend to raise the benchmark rate by a half-point on June 1 and there’s nothing in the latest GDP numbers that will knock them off course.

Perhaps the most stunning number in the report is Statistics Canada’s tally of nominal employee compensation, which rose 3.8 per cent from the fourth quarter, compared with a two per cent increase in the previous quarter. With the exception of the third quarter of 2020, when the pandemic was skewing most data, the latest increase was the biggest since the second quarter of 1981. That’s good for workers, whose share of GDP has generally diminished in recent decades. But it’s also a sign that inflationary pressures are spreading.

Recession talk is getting louder as more and more economists bet that global inflation, rising interest rates and the war in Ukraine will combine to create a downturn sometime soon. If that’s what lies over the horizon, Canada’s households and companies appear ready to weather the storm. Companies are investing at an impressive rate, and households still have a hefty store of disposable income.

The household savings rate increased to 8.1 per cent in the first quarter from 6.9 per cent in the fourth quarter. That’s a bigger cushion than existed ahead of the most recent recessions. The average household savings rate over the decade prior to 2020 was 3.5 per cent, Statistics Canada said. If things get worse, the economy should be able to handle it.

How to buy Litecoin in Canada