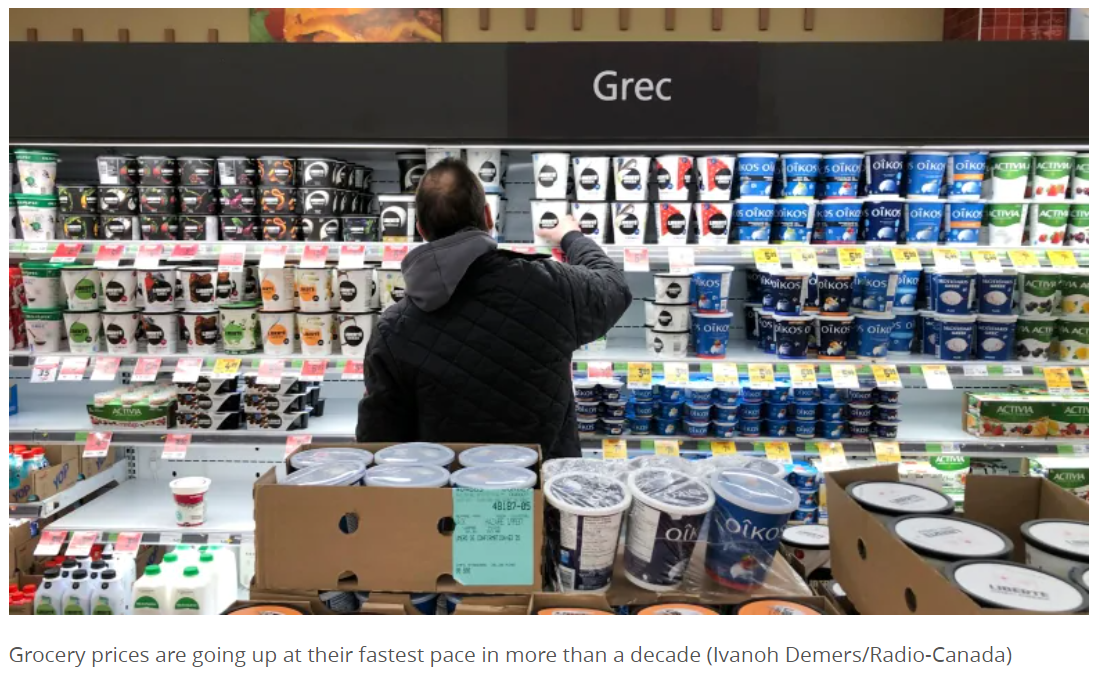 Grocery prices increasing at fastest pace in more than a decade.

The Consumer Price Index increased at an annual pace of 4.8 per cent in December, as sharply higher prices for food led to the cost of living going up at its fastest rate since 1991.

Statistics Canada reported Wednesday that grocery prices increased by 5.7 per cent, the biggest annual gain since 2011.

The price of fresh produce is being walloped by two things, the data agency said: “Unfavourable weather conditions in growing regions, as well as supply chain disruptions.”

The price of apples has increased by 6.7 per cent in the past year, and oranges by almost as much — 6.6 per cent.

The U.S. is the major supplier of oranges to Canada, and because of bad weather and a plant disease called citrus greening, the major growing region of Florida is on track to produce the smallest number of oranges since 1945.

“If you’re an orange juice drinker, it means your prices are going to be going up at the store,” analyst Phil Flynn, with Chicago-based commodity trading firm Price Group, told CBC News. “The cost of orange juice has almost doubled here in the last few months, and that’s going to be passed down to the consumers.”

Other types of food are going up quickly, too. The price of frozen beef has gone up by almost 12 per cent in the past year, while ham and bacon are up by about 15 per cent.

Kendra Sozinho, a manager at the Fiesta Farms grocery store in Toronto, says costs from suppliers are going up faster than she’s ever seen “We’re seeing almost every single supplier increasing their pricing which then increases our pricing,” she told CBC News in an interview. “I’ve been here for 20 years and I’ve never seen a jump like this.”

Economist Tu Nguyen with consultancy RSM says food price increases could be set to get even worse in the coming weeks and months because of new rules forbidding unvaccinated truckers from entering the country.

Food is far from the only thing becoming more expensive.

Shelter costs have risen by 5.4 per cent in the past year, faster than the overall inflation rate. And unlike the global forces at play pushing up food prices, the factors driving up shelter costs are all Canadian-made, TD Bank economist James Marple said.

“The one exception to the global nature of the current inflationary environment, is housing inflation, which is both domestically driven and, outside of increased incidents of extreme weather driving up insurance prices, directly related to the Bank of Canada’s policy stance,” he said.

Conservative finance critic Pierre Poilievre placed the blame for high inflation squarely at the foot of the federal government, noting that as a country with abundant energy and food resources, Canada should have a built-in advantage when it comes to keeping a lid on prices.

“The biggest increases for consumer products have been those that we source right here at home, not those that depend on foreign supply chains,” he told reporters in Ottawa.

“Home price inflation is a home-grown problem,” he went on, arguing that record government spending under Prime Minister Justin Trudeau is to blame for inflation. “The more he spends, the more things cost,” Poilievre said.

The Prime Minister, for his part, rejected that claim and said his government has a plan in place to face the inflationary challenges that many countries are facing.

12 days agoDuration1:34Prime Minister Justin Trudeau says inflation is a challenge facing many countries and his government has a fiscal plan in place to get past it. 1:34

Lending rates were slashed to record lows in the early days of the pandemic to stimulate the economy. But two years of rock bottom mortgage rates have proven to be jet fuel for Canada’s housing market, causing many policy makers to suggest the time has come for the Bank of Canada to hike its rate to cool things down.

After Wednesday’s inflation report, investors think there’s about a 75 per cent chance of a rate hike as soon as next week, when the bank is set to meet.

“Inflation is likely to come down over the next year, but getting it there will require tighter financial conditions and rate hikes by the Bank of Canada,” Marple said.

And an ongoing lack of semiconductor microchips continues to drive up the price of just about anything with a microchip in it.

That includes durable goods like washing machines and other household appliances, the price of which have gone up by 5.7 per cent in the past 12 months. New car prices are up by even more — 7.2 per cent.

If there was one area of relief for consumers, it was gas prices, where the price to fill up at the pump fell by 4.1 per cent during the month. That’s the biggest monthly drop since April 2020. But compared to a year ago, gas prices are still 33 per cent higher than they were in December 2020.