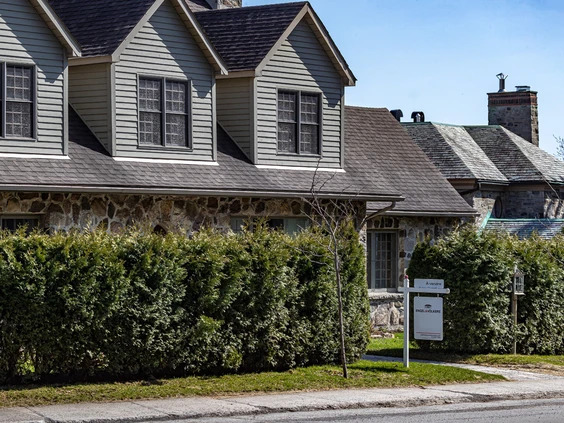 Homes for sale or sold in Westmount on Thursday April 28, 2022. PHOTO BY DAVE SIDAWAY/MONTREAL GAZETTE FILES

The Bank of Canada’s steep path to higher interest rates is pushing some homeowners close to the edge when it comes to covering their financing costs, with almost one in four saying they’ll have to sell if rates climb much higher, according to a survey conducted by Manulife Bank of Canada.

Rising interest rates — hiked in each of the last three policy-setting sessions — have taken some of the heat out of the pace of transactions and prices in Canada’s red-hot residential real estate market, but less has been revealed about their impact on existing homeowners.

More than 20 per cent of homeowners expect rising rates to have a “significant negative impact” on their mortgage, financial and debt situation, and 18 per cent said they believe they can no longer afford the home they’re in, according to the Manulife Bank survey, which was completed before the central bank’s latest half-point interest rate hike on June 1 to 1.5 per cent, the highest it has been since 2019.

Nearly half of the 2,001 Canadians surveyed said they would struggle to handle unexpected expenses or are reconsidering summer vacation plans due to affordability concerns, while just 46 per cent said they feel prepared for rising interest rates.

“The incidence of indebted Canadians is up significantly over the past year, with the increase coinciding with a sharp rise in interest rates and inflation,” Lysa Fitzgerald, vice-president of sales at Manulife Bank, said.

“We’re seeing many Canadians feeling the impact directly on their pocketbooks. For example, a couple who signed a variable-rate mortgage in January with a rate of 1.65 per cent at $2,600 a month (will) have seen their monthly payments go up by $250 in just four months due to rising rates.”

She added that another half-point increase in July would boost mortgage financing costs by a further $150, “meaning their mortgage will be $400 more a month than what they signed up for in the winter.”

The Bank of Canada last Thursday warned in its latest Financial System Review that household indebtedness continues to be the biggest vulnerability in the financial system despite threats from other areas such as global inflation and geopolitical tensions.

In one scenario, the report said monthly mortgage payments could jump by as much as 45 per cent upon renewal in 2025-26 for some who took out mortgages in 2020-21. The overall increase in monthly payments during that period for all types of mortgages would be 30 per cent.

The Bank of Canada has signalled further rate hikes are on the horizon as inflationary pressures continue to build. The June hike in borrowing costs was the third in a row, and the last two were uncharacteristically large half-point increases.

On Friday, economists at CIBC Capital Markets changed their rate forecast due to signs of worsening inflation, reasoning that could cause the Bank of Canada to raise rates higher than expected. CIBC raised its call to a peak of 2.75 per cent for the overnight rate, up from a previous forecast of 2.5 per cent.

Rising rates have already had a cooling effect on housing markets in some areas. Toronto home prices fell for the third straight month in May, with the average selling price dipping three per cent to $1.21 million in a market that has been on a tear for years, other than a slowdown in the early days of the COVID-19 pandemic. In Montreal, prices fell in both April and May.

Manulife Bank has been conducting debt surveys for more than a decade. The latest, conducted online by Ipsos between April 14 and 20, surveyed Canadians across the country between the ages of 20 and 69 with household incomes of more than $40,000. National results were weighted by gender, age, region, and education, and Manulife Bank said the survey has a credibility interval of +/- 2.5 per cent 19 times out of 20.

JetBlue to become carbon neutral in 2020