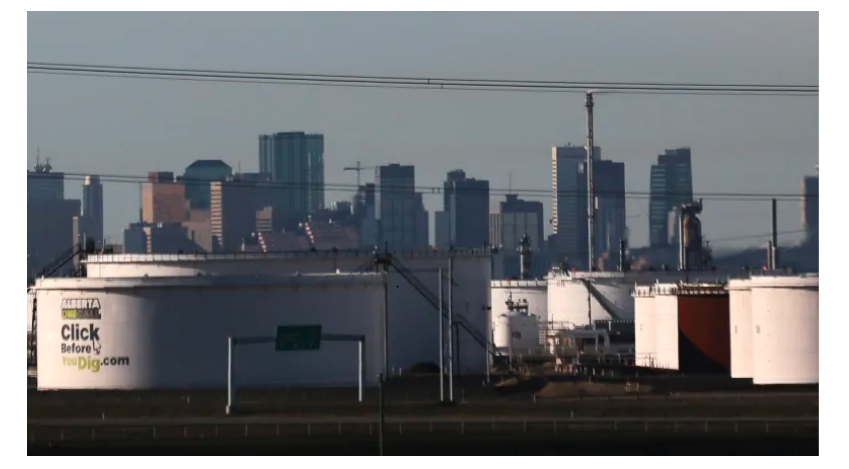 Crude oil tanks at Enbridge's terminal in Sherwood Park, near Edmonton. Canada's oilsands sector is making improvements on lowering its greenhouse gas intensity, but it's still known for producing a high-carbon source of oil. (Chris Helgren/Reuters)

For executives at Husky Energy’s headquarters in Calgary, there is a new wrinkle in how their pay is calculated: climate change.

This is the first year the company is linking greenhouse gas emissions to compensation as part of a new plan that also includes a goal to reduce carbon emissions by 25 per cent over the next five years and set a similar gender-diversity target for management.

The measures come at a time when oil and gas companies around the world are competing for limited investment dollars, and those investors are increasingly focused on environmental, social and governance (ESG) issues.

For the oilsands, in particular, its image is also on the line. The sector is making improvements on lowering its greenhouse gas intensity, but it’s still known for producing a high-carbon source of oil. That’s why pension funds, insurers and investment firms regularly blacklist or curtail their involvement in Alberta’s oilsands.

Those in the industry say those divestment decisions have very little financial impact on the sector but do cause harm to its reputation.

“It’s important that we move and that we show leadership, but it’s also important that the entire Canadian industry shows leadership because we’re out in a world where we are fighting for capital, and we need to show the world that we know how to manage these risks — not just as Husky, but as an industry,” said Janet Annesley, Husky’s senior vice-president of corporate affairs and human resources.

How much of an executive’s pay is tied to climate goals will vary depending on their responsibilities toward achieving the targets, Annesley said.

There are other factors that determine an executive’s pay, such as safety.

In 2018, for example, compensation for Husky executives was reduced following several problems, including an oil spill at an offshore operation in Newfoundland, a reprimand for a close call with an iceberg and a fire at a refinery in Wisconsin.

Conversely, last year the company had its best safety performance ever and compensation increased as a result.

“As they say in business, what gets measured, gets done,” Annesley said about the new climate goals. “We’ve identified the key executives, and we’re holding them accountable through our performance-based pay system to deliver on those targets.”

One of the largest oil and gas producers in the country, Calgary-based Canadian Natural Resources began including carbon emissions as part of its executive compensation scorecard in 2013.

Linking environmental goals with compensation isn’t precedent-setting, but it puts Husky among leading companies in the oilpatch, said Michelle Tan, a partner with Hugessen Consulting, which advises companies on executive compensation.

Husky’s gender-diversity target of 25 per cent women in senior leadership roles, she said, is unique.

“To my recollection, it’s the first time I’ve seen an oil and gas company in Canada put in a diversity target,” said Tan, who added that it’s more often seen in other industries like the technology sector.

Canadian companies are playing catch-up to their European counterparts on most ESG issues, since most large oil companies in Europe have already made major carbon-reduction decisions and have linked environmental performance to compensation for several years.

Royal Dutch Shell, a British-Dutch oil and gas company, and Spanish firm Repsol, for example, both base about 10 per cent of an executive’s variable compensation on carbon emissions performance.

Canadian oil and gas companies need to go beyond improving environmental performance, said Olaf Weber, a professor at the School of Environment, Enterprise and Development at the University of Waterloo in Ontario who researches sustainable finance.

“It’s too little, too late,” Weber said, explaining how the industry should have taken these types of environmental steps many years ago to reduce emissions.

“Rather than having compensation connected to reducing carbon emissions, the question is can you connect it to figuring out what could be new business strategies?” he said, such as investing in renewables.

Other experts see it differently, like Meghan Harris-Ngae, who leads Ernst and Young’s climate change and sustainability services practice for Western Canada.

The oil and gas industry has worked on environmental initiatives for many years, she said, but only now is it starting to get credit for what it’s done.

“One of the things that I have seen is that a lot of the investments that have been made over the years don’t necessarily get the proper recognition in the capital markets, and a lot of that innovation is capital intensive,” said Harris-Ngae, who is based in Calgary.

For example, Imperial Oil and other energy companies have developed new technology to use solvents in oilsands production as a way of reducing costs and greenhouse gas emissions.

Oilsands companies are not only looking to lower their emissions; they’re also trying to reduce water use, land impact and tailings ponds.

Taking action on ESG is the right thing to do, MEG Energy chief executive Derek Evans said last month during a virtual energy conference. It’s also about ensuring that oilsands companies, like his, have a future in a carbon-constrained world.

“We’ve got a 60-year reserve life, and to ensure that those assets aren’t stranded, we need to continue to demonstrate that we’re a leader in all aspects of ESG and that we don’t have our head stuck in the sand, in that regard.”