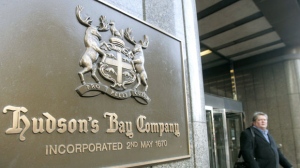 TORONTO — Catalyst Capital Group Inc. is seeking a hearing at the Ontario Securities Commission to block a rival takeover offer for Hudson’s Bay Co. by a group led by the retailer’s executive chairman.

The investment firm is seeking an order to prohibit the Richard Baker-led group from acquiring securities of HBC under its takeover proposal.

If it cannot have the deal blocked, Catalyst says it wants HBC to amend and resend to shareholders its management information circular to address what it says are numerous omissions and misrepresentations.

The firm would also want HBC to postpone a special meeting of shareholders to vote on the deal that is scheduled for Dec. 17.

Catalyst made an unsolicited offer of $11 per share in cash for HBC, topping the friendly offer of $10.30 made by the Baker group, however a special committee of the board at HBC has rejected the Catalyst offer because it does not believe it can be completed.

The Baker-led group, which collectively owns approximately 57 per cent of the common shares of HBC on an as-converted basis, has said it is not interested in selling its stake.