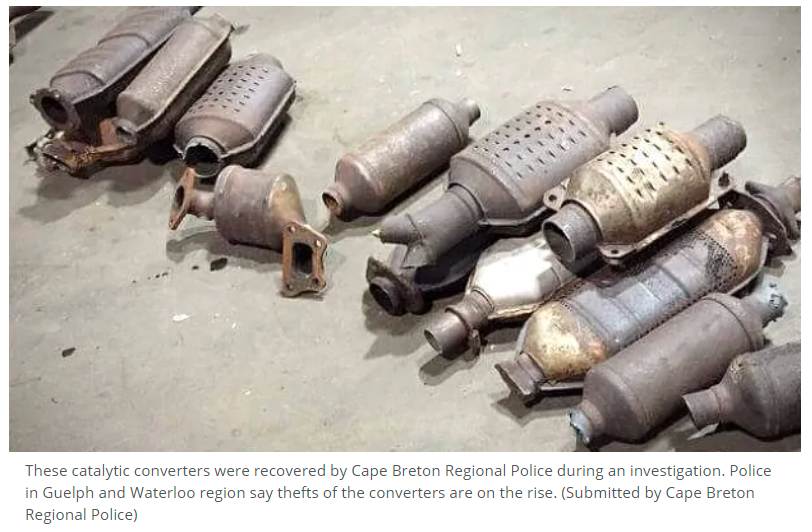 Theft of catalytic converters from the exhaust system of vehicles has become a growing problem in Canada.

It’s not a new issue, says Bryan Gast, the national director of investigative services at the Insurance Bureau of Canada, but as the price of certain metals has risen, so have thefts.

“Catalytic converters have been stolen for years,” he said.

“The difference lately is the price of precious metals, and obviously it’s the precious metals inside those catalytic converters that they’re looking to steal and then sell on the black market,” he said.

A catalytic converter is part of a vehicle’s exhaust system. It converts pollutants to less toxic material.

New cars, used cars — nearly any vehicle with a catalytic converter can be a target, Gast says. The exception is electric vehicles, which don’t have them, because they don’t produce any emissions.

The thefts have been happening across the country for the last year and thieves appear to be after three precious metals inside the converter: platinum, rhodium and palladium.

“That’s really what the rise is about,” said Gast. Those metals are “more valuable than gold right now.”

According to the website for Montreal-based Kitco Metals, which buys and sells metals and also reports on market trends, palladium is currently selling for just over $2,800 Cdn an ounce, although the Kitco 2021 outlook says it could rise to $3,000 by the end of the year.

Platinum was selling for $1,500 an ounce on Monday, while rhodium was going for about $30,000 US an ounce at the end of February.

By comparison, an ounce of gold is currently selling for about $2,200.

One reason for the rising value of platinum, rhodium and palladium is that as automakers make vehicles to meet tightening emission standards, manufacturers need more of those metals inside the new catalytic converter to do that work.

In Waterloo region, police say there have been 131 reports of catalytic converter thefts since the start this year, most of them happening in Kitchener, Ont.

“We are asking the community to be vigilant and report any suspicious activity to police immediately,” Const. Andre Johnson of the Waterloo Regional Police Service told CBC.

“We are also asking anyone who may have been a victim of a converter theft, who has not yet reported it to police, to please do so,” he said.

Nearby in Guelph, Ont., there have been at least 20 reports of catalytic converters being stolen from vehicles since Christmas.

Scott Tracey, a spokesperson for the Guelph Police Service, says thieves will crawl under a vehicle and cut out the tubular catalytic converter at both ends, leaving a missing section of the exhaust pipe.

The most recent theft in that city was from a group of vans parked together, but Tracey says they’ve seen thefts reported from vehicles parked overnight at mechanic shops, sometimes at private residences and also at vehicle dealerships.

Tracey says after the catalytic converter has been stolen, “[drivers] come in the morning and start warming the vehicles up and it makes a terrible noise because there’s essentially no exhaust system on the vehicle.”

RCMP in New Brunswick and Prince Edward Island have warned people this year about a rash of thefts. In P.E.I. last month, five people were charged in a string of thefts that police estimate caused damages of more than $100,000.

Last June, 20 Canada Post vehicles were targeted by thieves in Ottawa. In July, 27 people were arrested and 68 criminal charges were laid in Hamilton following a two-week project by police targeting catalytic converter thefts.

Police in Sudbury reported 52 thefts of catalytic converters between June 1 and Dec. 31, 2020.

“This is a substantial increase in comparison to the 12 reports of thefts of catalytic converters reported in the same time period in 2019,” Sudbury police said in a release.

Thieves have cut converters out of school buses in Winnipeg, hundreds have been stolen in Edmonton and in Calgary, a man died in Feb. 2020 after it appeared he was trying to steal a catalytic converter and the vehicle fell on top of him.

Gast says thefts from vehicles that are higher off the ground appear to happen more frequently, but even so, it doesn’t take much for a thief to jack up a car and remove the converter “in just minutes.”

He says there are some measures drivers can take to protect their vehicles. The two cheapest and most cost-effective ways are:

He says there are third-party companies that can etch an ID number onto a vehicle’s catalytic converter and enter that information into a database. The database is available for concerned salvage operators to check.

Gast said while black-market scrap metal dealers would likely still take an engraved converter, “it really helps with minimizing the ability for [thieves] to get rid of their product.”

He said he has also heard of people going to their local garage to have the converter welded to the vehicle frame or have mechanics put a screen over it.

That may be a bit extreme, he says, but anything that makes it more difficult to cut out the converter can help deter a would-be thief.

With files from Jackie Sharkey

‘Pinball’ is coming to the PCMA-NEMA merger celebration