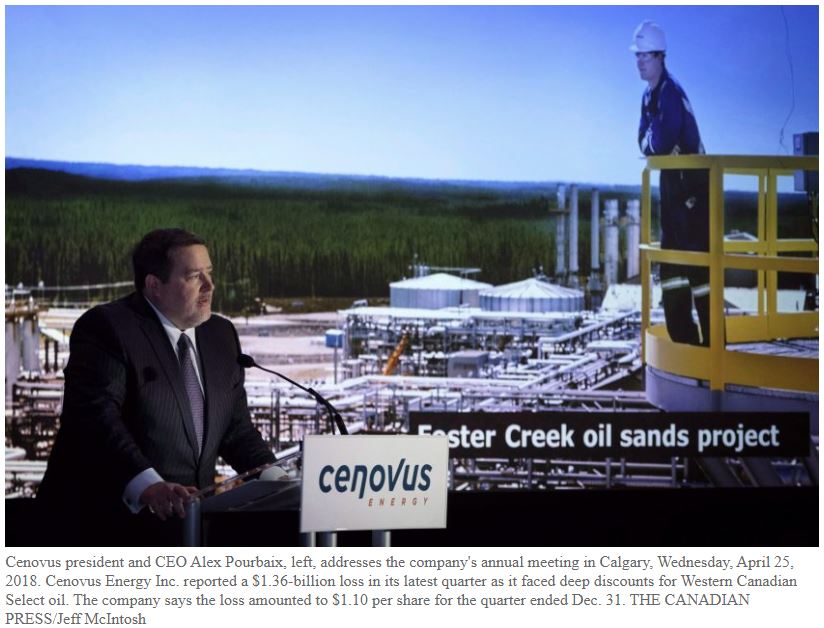 CALGARY — The CEO of Cenovus Energy Inc. says the company is going ahead with plans to raise its crude-by-rail shipments to 100,000 barrels per day this year, despite criticism from other major producers that Alberta’s forced production cuts have destroyed rail’s profitability.

The Calgary-based company is confident that the province will encourage growth in crude-by-rail as an alternative to delayed new export pipelines going forward, Alex Pourbaix said Wednesday on a conference call.

“I remind everybody that although we are in a very low differential (price) period right now, we are literally six weeks into this curtailment initiative,” he said.

“I think there’s been a lot of noise … but I do expect that the government is going to act to continue to look at those volumes to ensure they’re at the right level to incent rail to get on.”

Pourbaix’s comments are in sharp contrast to criticism of the provincial program’s affect on rail economics by Steve Williams, CEO of Suncor Energy Inc., and Rich Kruger, CEO of Imperial Oil Ltd.

Kruger said Imperial would reduce its rail shipments of crude to “near zero” this month from about 168,000 bpd in December because the difference between western Canadian and U.S. benchmark oil prices had narrowed to the point that it didn’t cover the additional cost of using rail to send oil to the U.S. Gulf Coast refining complex.

Pourbaix said in an interview that Cenovus isn’t making much, but it isn’t losing money on the 20,000 bpd of oil it is now shipping by rail into the U.S. and he expects profitability to improve as the company begins receiving and filling about 4,000 newly built rail tankers in the next few weeks.

He pointed out Western Canadian Select bitumen-blend oil is at times fetching a premium to New York-traded West Texas Intermediate prices at Gulf Coast refineries because of a shortage of competing crude from Venezuela and Mexico.

Cenovus also announced Wednesday it has increased its shipping commitment on the proposed Keystone XL pipeline from Alberta to the Gulf Coast from 50,000 to 150,000 bpd.

Pourbaix said part of the increase is being provided at no cost by the Alberta government.

When the province committed a year ago with builder TransCanada Corp. to take 50,000 bpd on the pipeline, it agreed that it would stand aside if there was private sector demand, Premier Rachel Notley said later at an event in Calgary.

“Not surprisingly, (TransCanada) discovered there’s tremendous demand within the private sector … so we were pleased to be able to do that with Cenovus,” she said.

Alberta Energy later confirmed that Cenovus is assuming the entire 50,000-bpd commitment, along with the 20-year toll agreement.

Cenovus had mixed news on a 50,000-bpd expansion at its Christina Lake thermal oilsands operation in northern Alberta.

It said wells in the project are being injected with steam five months ahead of schedule and capital costs are about 25 per cent lower than expected but production, which would potentially start in the second quarter, could be delayed depending on the curtailment plan and access to market.

Cenovus reported a $1.36-billion net loss from continuing operations in the fourth quarter of 2018 due to low oil prices, voluntary production cuts, a writedown on its conventional oilfields and a non-cash hit due to inventory accounting at its U.S. refineries.

The company missed analyst earning expectations as its net loss for the year climbed to $2.9 billion.

Like Suncor and Imperial, Cenovus reported lower prices for its upstream oil production blamed on a lack of pipeline access to U.S. markets, but better profit margins at its refining operations in part due to the lower cost of feedstock.

CIBC analyst Jon Morrison said in a report that the earnings report was negative, but the setbacks shouldn’t last long.

“Specifically, differentials are tight right now, reflective of the Alberta production curtailments, and although we expect diffs to widen in the second half of 2019, Cenovus should be more protected through the crude-by-rail agreements that were previously announced,” he said.

The loss amounted to $1.10 per share for the quarter ended Dec. 31, compared with a profit of $620 million or 50 cents per share in the last three months of 2017, when its results were boosted by the sale of assets in Alberta and Saskatchewan.

— With a file from Lauren Krugel.