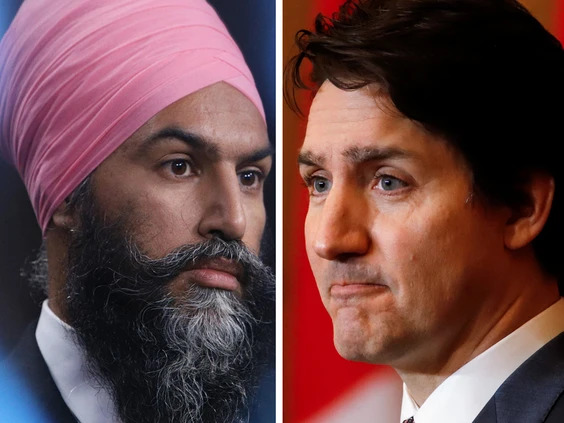 NDP Leader Jagmeet Singh, left, and Prime Minister Justin Trudeau have reached a deal to keep the Liberals in power until 2025. PHOTO BY GETTY IMAGES/REUTERS

A political deal that will see the New Democratic Party prop up the minority Liberals is bringing a proposed surtax on bank profits back into focus, a policy recommendation that is not sitting well with the head of one of Canada’s biggest lenders.

Victor Dodig, chief executive of Canadian Imperial Bank of Commerce, characterized a tax on the finance industry’s profits during the pandemic as discriminatory, and said Prime Minister Justin Trudeau risks hurting investment if he goes through with it.

“You send out negative signals to investors when you start picking on industries,” Dodig said during a call with reporters on March 22, when asked to respond to the inclusion of a bank tax in the agreement that will keep the Liberals in power through 2025.

The surtax has been controversial since it was proposed during the campaign leading up to last September’s election.

During the election, the Liberals vowed to take aim at the wealth bank and life insurance companies accumulated during the pandemic with a three per cent surtax on profits over $1 billion. The party said the move was expected to generate an additional $2.5 billion a year in government revenue over the next four years starting from 2022.

Trudeau reiterated the pledge during a morning press conference on Tuesday.

“We will deliver a fairer tax system for the middle class by addressing the profits made by financial institutions during the pandemic,” he said.

“People are struggling to keep up with the rising cost of groceries, gas and housing,” Singh said in a Monday press release. “Meanwhile, big banks, big box stores and big oil companies are making record profits off the backs of Canadians worried about making rent at end of the month or putting food on the table.”

“We’re asking the government to keep their promise to put a tax on the excess profits of huge corporations and to reinvest it to help make life more affordable for you and your family.”

Nigel D’Souza, an investment analyst at Veritas Research, told the Financial Post he does not expect a material impact to the banking sector, but remains concerned that it could open the door for more aggressive tax policies down the line.

“A bigger concern to me is whether they set the precedent for more onerous taxation in the future; and the reason that’s an issue is because bank earnings are cyclical,” D’Souza said. “They do well in the good times, but they need to build up the capital level and earn the higher income stream so that they have enough capital during the bad times (with) lower earnings, for loan losses.”

D’Souza added that the tax could deter investments into the banking space with an implicit ceiling on bank profitability.

Financial Post found that total proceeds from the three per cent surtax would cost the Big Six banks approximately $1.55 billion based on the full-year fiscal income in 2021. Royal Bank of Canada would have had the largest bill in 2021 at $453.0 million, with Toronto Dominion second at $398.7 million.

An analysis by the Financial Post in August found that for fiscal 2020, a year disrupted by the pandemic, a three per cent surtax on income above $1 billion would have forced the Big Six banks to fork over approximately $1.05 billion. Those figures were based on reported income, which can differ from taxable income.

In August, the Canadian Bankers Association criticized the Liberal plan for singling out financial services.

“The proposed tax increase would reduce income that would otherwise benefit the majority of Canadians who are bank shareholders, either directly through share ownership or indirectly through pension and mutual funds, including the Canada Pension Plan,” the group said in a statement at the time, adding that pension funds and RRSPs are some of the main beneficiaries of the billions of dollars that the banks pay in dividends each year.

Kevin Carmichael: The sleeper issue that will determine the future of Canada’s economic success