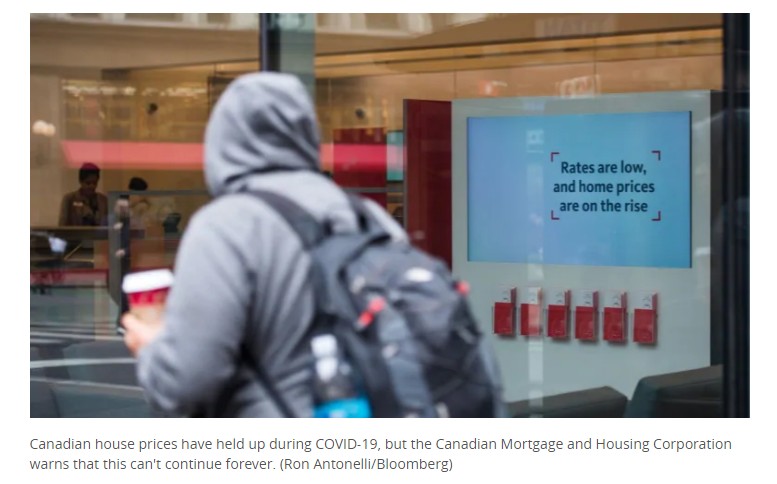 CMHC tried to raise lending standards, but others didn’t match the higher bar

The head of Canada’s national housing agency is asking banks and mortgage companies to stop offering higher-risk mortgages to over-leveraged first-time buyers, because they represent a threat to the economy.

In a letter to officials in the federal government and representatives of Canada’s banking and credit union industry, Evan Siddall, the CEO of the Canada Mortgage and Housing Corporation, asked lenders to be more strict about how much money they are willing to lend to fund home purchases, and more diligent about who they are lending to.

The letter was first reported on by financial news channel BNNBloomberg before Siddall released the letter publicly on social media.

“I am asking you to continue to support CMHC’s mortgage insurance activity in preserving a healthy mortgage sector in Canada,” Siddall wrote to the banks, credit unions and other mortgage lenders that make up his customer base.

While the CMHC does not directly loan out money to buy homes, it has a massive influence on Canada’s housing market because it insures a big chunk of the loans that lenders give out.

By law, borrowers with down payments of less than 20 per cent must purchase mortgage insurance to cover potential losses if they default on their loans. Premiums that borrowers must pay for that insurance can add thousands of dollars to the cost of the loan.

Earlier this summer, the CMHC announced it would raise its standards for giving out such insurance by raising the minimum credit scores it will accept, putting a cap on the gross debt ratio for an approved borrower, and banning the use of borrowed money to come up with the down payment.

CMHC is the dominant mortgage insurer, but they do compete with private companies Genworth and Canada Guaranty for business. It’s impossible to downplay CMHC’s outsized impact on the market, however — as of the end of 2019, the crown corporation was on the hook for $429 billion worth of Canadian real estate, by insuring the mortgages on it.

The insurers often move in unison, so in the past any change at CMHC was quickly matched by the other two. But that didn’t happen this time, which means the CMHC’s moves had little impact beyond moving borrowers from CMHC to a competitor. Anyone who was locked out by the CMHC’s higher standards simply got insurance elsewhere where the standards were lower.

In his letter, Siddall pleaded with lenders to work with CMHC to make sure lending standards don’t become even more lax.

“There is no doubt that we have willingly chosen to forego some profitable business that our competitors would find appealing,” Siddall said.

“While we would prefer that our competitors followed our lead for the good of our economy, they nevertheless remain free to offer insurance to those for whom we would not.”

By not tightening lending standards, Siddall warned that the entire economy could be put at risk.

The Switzerland-based Bank of International Settlements, an industry group for central banks around the world, warns that as a rule of thumb, when households have debt loads above 80 per cent of their gross income, it’s bad for the economy.

Canada’s ratio on that front has blown past 100 per cent and is approaching 115 per cent, Siddall warns.

“Too much debt not only increases risk, it therefore slows economic growth.”

COVID-19 has walloped every facet of the Canadian economy, but broadly speaking, house prices have yet to fall in any meaningful way. Compared to last year, average prices were flat in March and April, before ticking higher, in May and into June.https://datawrapper.dwcdn.net/6GnwF/1/

But that is unlikely to continue forever, Siddall warns.

He suggests a big reason that prices are staying high is because massive government spending programs like CERB and CEWS have allowed people to keep their heads above water for now.

But those are set to expire in the coming months, as will the hundreds of thousands of mortgage interest deferrals that banks have doled out.

Once those programs end, bankruptcies and defaults may follow, and that is when prices may decline as new buyers are unable or unwilling to pay ever-higher prices, and sellers behind on their mortgages could become desperate to sell.

“The economic cost of COVID-19 has been postponed by effective government intervention,” he said. “It has not been avoided.”

House prices could fall by about 18 per cent and the impact of COVID-19 will be felt into 2022, the CMHC said recently.

Siddall said that under the current rules, there are loopholes that could allow people to buy houses with negative equity.

Although rare, mortgages for 95 per cent of the home’s value are allowed, and that loan would come with a four per cent capitalized insurance fee. Even a tiny fall in the housing market for someone with that loan would be onerous to withstand, as the homeowner would owe far more on their home than it is worth in reality.

“In the midst of an economic calamity,” Siddall said, “we risk exposing too many people to foreclosure. These are individual tragedies that also create conditions for exacerbating feedback loops and house price crashes.”

Without naming names, Siddall accuses some in the industry of handing out too many risky loans while ignoring the long-term cost of doing so.

“Please put our country’s long-term outlook ahead of short-term profitablility,” he said.

“There is a dark economic underbelly to this business that I want to expose.”

You can still nominate for 2018 PCM Awards

Ontario Cities with the Highest and Lowest Property Tax Rates