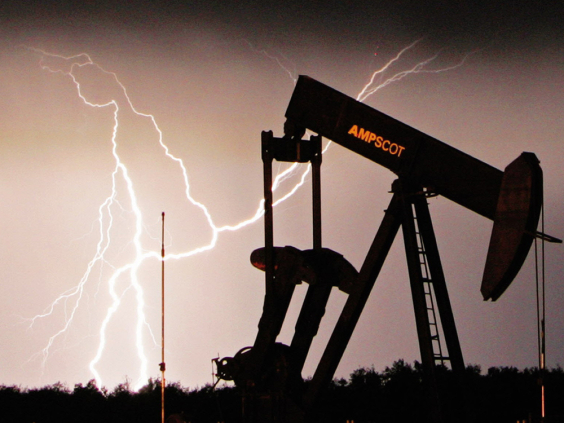 It became even more abundantly evident that something must be done to help Canada’s energy industry after oil hit negative prices on Monday.

As the requests for help mount, so do the objections from those who say they don’t want taxpayer dollars going towards helping the oil patch. They shouldn’t worry so much. The $15 billion to $30 billion of backstopped credit Premier Jason Kenney is asking for — to help the energy industry survive an unprecedented perfect storm of events — largely comes from the energy industry, to begin with.

The pure numbers of just how much Alberta has contributed to the country tell both a compelling and troubling story. If the patch dries up, this country is in serious trouble.

The Canadian Energy Centre calculates that over the past 18 years the direct contributions Canada’s energy sector made to federal and provincial revenues between 2000 and 2018, is very conservatively estimated at $360 billion — more than any other sector by a long shot.

That amount does not include income taxes paid by the more than 800,000 Canadians employed directly or indirectly by the energy sector, or provincial rents and royalties paid between 2000 and 2007. (It’s omitted due to a change in Statistics Canada reporting; so $166 billion paid in royalties and other payments applies to the 2008- 2020 period only).

But what about the taxes Canadians pay in various provinces?

Back in 2009, when the world was suffering through the global financial crisis, Canada fared much better than most countries, largely thanks to the energy industry.

In 2012, Alberta Finance revealed that in 2009 Alberta was the only net contributor to confederation. In that year alone, it was estimated that Alberta sent $16 billion more to the federal government than it got back in federal transfers.

Put another way, it was estimated that in 2009 Albertans — including individuals and corporations — paid $36 billion gross in taxes to the federal government (including income tax from individuals and corporations, GST and EI), and received $20 billion back in transfers from the federal government (in EI benefits, Old Age Security, transfers to the province and other expenditures.) That means, the rest of Canada got to keep $16 billion net from Alberta that difficult year. On a per-capita basis that amounted to $4,356 for every man, woman and child in Alberta.

All other provinces were net recipients of federal transfers, with Quebec receiving $13.6 billion, Nova Scotia $7.2 billion, Manitoba $6.46 billion, New Brunswick $4.97 billion, Newfoundland $2.6 billion, Saskatchewan $1.3 billion, PEI $1.2 billion (or $8,500 per capita, which was the highest in Canada), Ontario $1.06 billion and B.C. a measly $11 million, according to Statistics Canada figures.

Because Alberta has a younger demographic and the oil and gas industry pays higher salaries than average, that tends to raise the average paycheque in Alberta. As a result, Albertans have paid more into federal coffers than they receive back.

Starting in 2015, tens of thousands of Albertans lost their jobs owing to the drop in oil prices and the reckless royalty review Alberta’s then NDP government initiated that spooked capital investment, not to mention raising the carbon tax paid by industry during tough times.

Just imagine where this country would be, during this global pandemic, without those contributions from Alberta not just over the few years highlighted here but for many decades now. Alberta has been a net fiscal contributor to Canada in 43 of the past 50 years. No other province even comes close to that consistency.

Over the past 25 years, Albertans have made a net contribution to Canada of more than $400 billion (in 2018 dollars), states Alberta’s 2020 budget.

Those who object to helping the oil and gas industry need to understand that without energy sector tax revenues flowing into federal and provincial coffers — this country would be either an economic basket case or Canadians would have a much lower standard of living in virtually every aspect, including health care, education, infrastructure, pensions — everything.

While the unprecedented slump in oil prices is due in part to the COVID-19 recession, it has been exacerbated by the predatory price war led by Saudi Arabia and Russia, “who are trying permanently to damage North America’s energy industry,” Kenney said, during his televised speech to Albertans on April 8.

Even though Alberta only has 12 per cent of Canada’s population, the province attracts one-quarter of the capital investment in the country.

Last May, federal NDP Leader Jagmeet Singh said: “We cannot be relying on fossil fuels to burn as an energy source at all in this country.”

For a fella who uses more than most of the stuff flying and driving all over the place, it was not just a reckless comment, but also a completely ignorant one. Global oil demand, which until the pandemic hit, was consuming 97 million barrels of oil per day.

According to the International Energy Agency, oil demand is expected to continue to grow until at least 2030 by an additional one million barrels of oil per day every year. Demand will not drop off to zero then but will “level off,” so it’s not a question of whether or not oil will continue to be needed but who will supply that growing demand. Most Canadians would, or at least should, prefer to consume Canadian oil rather than oil that enriches OPEC dictators, Russia and Venezuela.

On April 17, Kenney said: “I want to remind our fellow Canadians . . . that when we were in the midst of the global financial crisis 12 years ago, the national government stepped in to ensure a future for the central Canadian auto manufacturing sector. That was the right thing to do. It helped to save that sector and with it hundreds of thousands of jobs.

“But during that global financial crisis, one of the reasons Canada got through it stronger than virtually any other developed country was primarily because of the strength of the Alberta oil and gas sector,” he said.

“That is one expression of how Alberta has always been there to help the rest of the country. This is a sector that helps to sustain approximately 800,000 jobs directly and indirectly, that generates tens of billions of dollars of revenue — more than any other industry in the country — revenue that goes to support things like world-class health care, the system that we all count on right now.”

If Canada’s energy sector dies, or even is left in a coma, every Canadian will suffer. The numbers don’t lie.

Licia Corbella is a Postmedia columnist in Calgary. lcorbella@postmedia.com