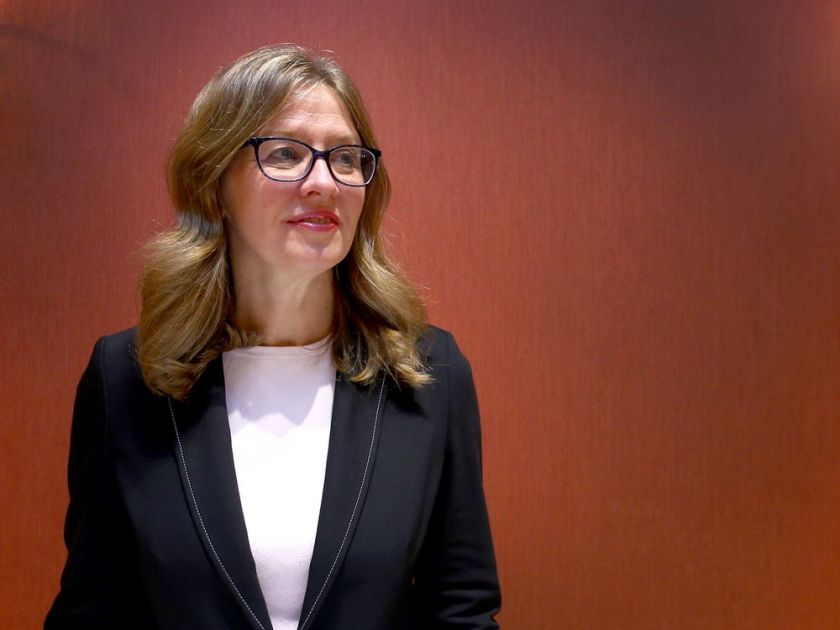 Why did Prime Minister Justin Trudeau order his revenue minister to stop the Canada Revenue Agency from auditing politically active charities? Was it to protect his best friend and former principal secretary, Gerald Butts?

Those are just two of the many questions asked by Vivian Krause during a sold out Calgary Chamber of Commerce luncheon Wednesday at the Fairmont Palliser Hotel and during a scrum with reporters afterwards.

Krause, the Vancouver-based researcher who has single-handedly exposed the foreign-funded campaign to “land-lock Alberta crude” — which Alberta Premier Jason Kenney vows to hold a public inquiry into — pointed out that her popular blog and Twitter account are called Fair Questions,because she doesn’t claim to have all of the answers.

Toward the end of her more than one-hour discussion — complete with numerous slides showing the paper trail behind $600 million of American money from U.S. foundations to Canadian environmental groups to “demarket” Canadian oil and gas — Krause turned her attention to how questions surrounding CRA audits of political charities in Canada “go right to the office of our prime minister.”

“When the current government came to office, the prime minister characterized these audits as ‘political harassment’ in his mandate letter to the national revenue minister, and the finalization of the political activity audits was suspended (by the CRA),” she told the attentive crowd of 170 chamber members and their guests.

Krause testified before the House of Commons Standing Committee on Finance about changes made by the Trudeau government to the income tax act with regard to charities.

The main changes to the legislation are the removal of restrictions on the extent to which charities are allowed to engage in political activity — something that was not historically allowed except by registered political parties.

Suspiciously, seven days after she testified, the CRA eliminated the online access to more than one million tax returns, says Krause.

“Every single tax return for every single registered charity for 14 years. All that historical data, gone,” she said, saying that only the five most recent years remain online.

A spokesperson for the CRA, reached past business hours in Ottawa on Wednesday, was unable to find out why those documents were removed from public view but is attempting to obtain that information.

“This fall we’ve got an election coming up and a lot of this goes right to the prime minister’s office,” said Krause. “The fact that he suspended all the political activity audits for four years, then changed the law retroactively and then finalized the audits, I think it’s something we need to talk about but it’s going to be very difficult unless those tax returns are restored.”

Krause called on chambers of commerce groups across the country to write letters to the CRA and to politicians to put the data back online.

“In practice, what this means is that some of the charities that would have had their status revoked will be off the hook because the law was changed retroactively,” she told the Commons committee.

Krause said one of the findings the CRA reported was “‘serious noncompliance’ unrelated to political activity, including an ‘undue benefit’.

This was done as part of the campaign to land-lock our crude.Vivian Krause

“This was what I was concerned about with regard to a payment of roughly $400,000 to the president of an environmental charity. Subsequently, the individual who received this payment, Mr. Gerald Butts, became the principal secretary to Prime Minister Justin Trudeau. Mr. Butts has confirmed via Twitter that he did receive this payment as severance (from the World Wildlife Fund) after he voluntarily resigned (to run Trudeau’s successful 2015 federal election campaign.)

“From the way these audits were handled, some charities and individuals may have benefited. Some of these charities and individuals have very close involvement with the Office of the Prime Minister and his former principal secretary. Therefore, I believe the handling of these audits raises serious questions that merit answers,” she told the committee.

Krause also points out that the same U.S. foundations that have spent hundreds of millions of dollars successfully blocking Canadian energy pipelines to tidewater also funded groups that helped Trudeau win the 2015 election.

Krause showed slides that prove that foreign money “moved the needle” in the 2015 federal electioncampaign, with groups claiming credit for defeating 26 Conservative incumbents. These foreign funded groups, such as OPEN and Leadnow, pumped millions of dollars into Canada’s federal election, a dangerous loophole in Canadian law that the Trudeau government refuses — perhaps not surprisingly — to close. Leadnow admitted that it received foreign funding before the 2015 election but claims that money was not used in its Vote Together campaign to defeat the Harper Conservative government.

“They didn’t do this because of how we treat refugees or immigrants, or First Nations people or anyone else,” Krause told the crowd.

“This was done as part of the campaign to land-lock our crude. To defeat the one political party (the Conservatives) that was committed to breaking the American monopoly that’s keeping our country over a barrel,” she said.

Krause then showed a slide with a massive tangle of red lines representing pipelines and dots representing tankers on our coasts, which wasn’t lost on the oil-friendly group to reflect on the recent passing of Bill C-48, the tanker ban, and Bill C-69, which has been dubbed the “no more pipelines” law.

“The only ones against which there is a multimillion-dollar, decade-long campaign are the pipelines that would take your oil to overseas markets. No campaign against Texas,” she states.

Fair questions. We need some answers. Perhaps Butts can help.