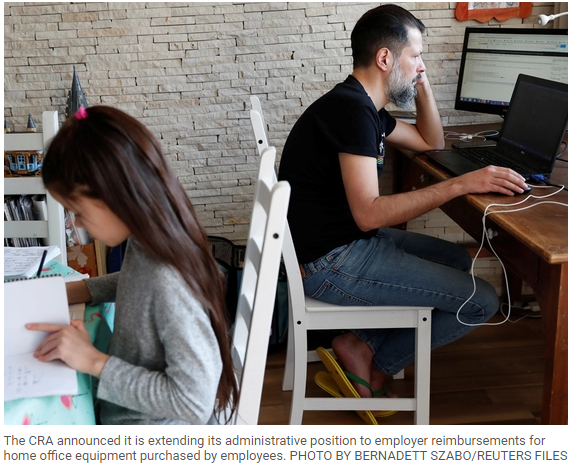 Jamie Golombek: Also clarifies $500 is max reimbursement for each employee, not each piece of equipment

At the Canadian Tax Foundation’s annual conference held in late October, the Canada Revenue Agency provided a bit of good news when responding to a couple of questions posed to them during their annual roundtable session. The first dealt with the reimbursement of computer and office equipment by employers and the second concerned refinancing a prescribed-rate loan. Let’s take a look at what the CRA said about each issue.

You may recall that back in April, the CRA issued a technical interpretation dealing with employee taxable benefits that employees may have received as a result of having to now work from home due to COVID-19. The CRA was asked whether an allowance paid by an employer to an employee for the purpose of acquiring equipment to enable them to work from home would be considered a taxable benefit to the employee. The CRA was also asked whether its response would be different if the amount paid by the employer is conditional on a proof of purchase being submitted by the employee.

The CRA indicated that a general allowance paid to an employee would be considered a taxable benefit but that, in the context of the COVID-19 pandemic, the CRA would be “willing to accept that the reimbursement of an amount not exceeding $500 for the purchase of personal computer equipment will not be taxable if it is mainly for the benefit of the employer.”

The CRA was then asked whether its position on the amount reimbursed for the purchase of personal computer equipment would be expanded to include the purchase of home office furniture, such as desks, chairs and so forth. At the roundtable, the CRA announced that it was extending its administrative position to employer reimbursements for home office equipment purchased by employees.

Since July 1, the CRA’s prescribed rate has been one per cent, opening up a potentially lucrative opportunity for some Canadians to execute an income splitting strategy.

The drop in the prescribed rate may provide some Canadians with a significant opportunity to split income with a spouse or common-law partner, (grand)children or other family members. Income splitting is the transferring of income from a high-income family member to a lower-income family member. Since our tax system has graduated, progressive tax rates, by having the income taxed in the lower-income earner’s hands, the overall tax paid by the family may be reduced.

The “attribution rules” in the Income Tax Act prevent some types of income splitting by generally attributing income or gains earned on money transferred or gifted to a family member back to the original transferor. There is an exception to this rule if funds are loaned, rather than gifted, provided the rate on the loan is set (as a minimum) at the prescribed rate in effect at the time the loan was originated and the interest on the loan is paid annually by Jan. 30 of the following year.

But, let’s say you entered into a prescribed-rate loan with a family member when the rate was two per cent (or higher) and you want to refinance the loan at one per cent. The CRA has stated that simply repaying a higher prescribed rate loan with a lower rate loan could trigger the attribution rules on the investment income.

Instead, the lower-income family member should sell the investments (which could trigger capital gains tax, depending on the market value of the investments compared to their tax cost), and repay the loan. They can then enter into a completely new loan agreement using the new one per cent prescribed rate. But do they need to sell all the investments or just enough to pay off the loan? The CRA addressed this question at the Roundtable session.

Let’s say Lisa, a high-income earner, loaned her husband, Harvey, who is in a lower tax bracket, $100,000 (“Loan 1”) back when the prescribed rate was two per cent. The borrowed money was used to purchase securities for $100,000. Those securities now have a value of $200,000. The couple wants to refinance the loan at one per cent. Harvey would sell half the securities and use the proceeds to repay Loan 1. Harvey would then borrow $100,000 from Lisa at the current lower prescribed rate of one per cent (“Loan 2”). The proceeds of Loan 2 would then be used to purchase new securities for $100,000.