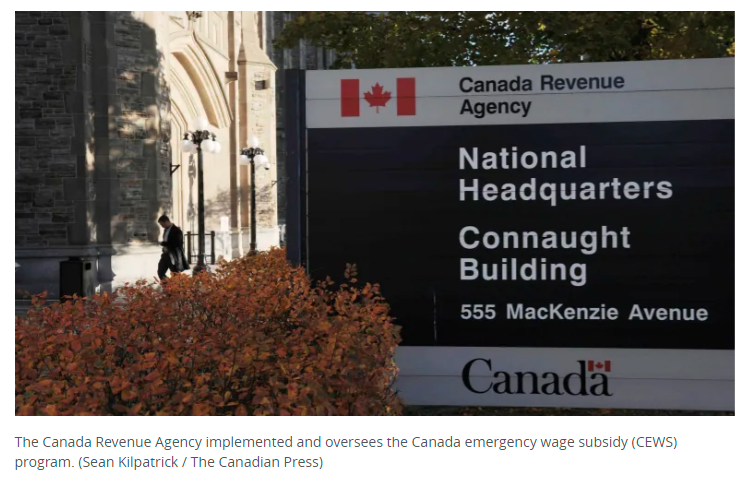 Despite repeated threats from the federal finance minister’s office to come down hard on companies with large fines and even imprisonment of executives for misusing the Canada emergency wage subsidy (CEWS), the CRA hasn’t penalized a single company.

Critics say that’s in part because the CEWS program doesn’t expressly restrict how companies manage the profits that might result from receiving federal support for wages, so long as the government money was used for that purpose.

“The government dropped the ball,” said Richard Leblanc, a professor of governance, law and ethics at York University.

It’s not difficult to find examples of companies that appear to have fared well after receiving pandemic support money from Ottawa.

It also paid out $8.8 million in dividends, the first such payment to its shareholders in several years. Between August and December, the company also bought back $3.3 million worth of its own stock.

“The criteria to qualify for the subsidy were clear, and Yellow Pages followed and met those criteria,” the company said in an email to CBC News.

“With the assistance of the subsidy, Yellow Pages did not reduce employee wages, impose mass layoffs, or furlough its employees.”

Money in, money out

But some critics say the fact companies were able to raise dividends or buy back shares after receiving CEWS funds is evidence the program is flawed.

The CRA would not say which companies were the subject of complaints or provide any further details about the nature of the complaints.

At a total cost of more than $74 billion, CEWS has now become the government’s most expensive COVID-19 relief program, surpassing the Canada emergency response benefit (CERB).

The program was launched a year ago this month to help Canadian companies keep staff on their payroll as strict COVID-19 restrictions were imposed.

The basics were simple: the government would pay up to 75 per cent of employees’ wages in order to encourage companies to avoid layoffs and rehire workers.

To qualify, companies simply had to show a drop in revenue during the pandemic, either annually or over particular periods.

CBC News has found six examples of large, publicly listed corporations that qualified for and received CEWS and either initiated or increased payments to investors in the form of dividends.

They include TFI International, a Montreal-based shipping and logistics company with more than 16,000 employees across North America.

TFI hiked its dividend twice in 2020, paying out more than $67 million to shareholders while also receiving $52.3 million in CEWS.

In an email to CBC News, TFI declined to comment on the subject.

High Liner Foods received $3.4 million in CEWS and increased its dividend by 40 per cent citing “improving free cash flow.” High Liner Foods paid out a total of $5,518,000 in dividends in 2020. The company did not respond to repeated requests for comment

Tourmaline Oil, an oil and natural gas producer based in Calgary, and Alamos Gold, a multinational gold producer based in Toronto, also raised their dividends and received CEWS, although neither company published the amount of money it received from the government wage subsidy program.

Tourmaline increased its dividend by 17 per cent, and Alamos by 33 per cent, noting that “the increase is supported by the record free cash flow in the quarter and strong outlook.”

“The average person will see that there was unjust enrichment as a result of a government program, and that money went to shareholders and went to executives,” said Leblanc.

He argues corporations should have been required to restrict dividend increases, share buybacks and hikes to executive compensation as a condition for receiving CEWS.

“It could have been so easy to restrict that at the beginning,” he said.

Those types of restrictions would not have been unprecedented in Canada.

At the beginning of the pandemic, the Office of the Superintendent of Financial Institutions (OSFI), Canada’s banking regulator, barred banks and insurers from dividend increases, share buybacks and increases to executive compensation to ensure Canada’s financial institutions were economically stable and had adequate capital and liquidity.

Some pandemic-related stimulus funding in the U.S. was also conditional on restricting dividend increases, executive pay and share buybacks.

Ari Pandes, associate professor of finance at the University of Calgary, says often those types of restrictions are driven by politics.

“I can see the optics are bad,” Pandes said of companies that receive government subsidies and then increase payouts to shareholders or raise executive compensation.

“But the intent of the wage subsidies was to make the companies as if the pandemic didn’t happen, going as they were. And if that was the intent, well, that’s good. Companies are healthy.

“A company would never increase a dividend unless they felt they could sustain that for the very long term.”

Falling through the cracks

As of this month, CEWS has been distributed to more than 440,000 businesses. But some businesses that say they desperately needed the subsidy found they didn’t qualify.

555 Brewing Co. in Prince Edward County, Ont., laid off most of its employees in March 2020, when the pandemic hit. The business qualified for a few CEWS payments and was able to rehire some of its workers. But the seasonal nature of the business meant it was not able to tap into the wage subsidy over a subsequent number of qualifying periods.

“Unfortunately, a few of the periods we didn’t qualify, we only just missed it, but we’re still down,” said co-owner Drew Wollenberg.

“[Especially] when you take into consideration all the extra expenses that we’ve had, we’re operating with almost twice the overhead to try to keep everyone safe and to pivot the business to suit the current climate.”

Natalie Wollenberg, Drew’s wife and co-owner of 555 Brewing, says hearing about companies increasing payouts to shareholders while her business is struggling to stay afloat is tough to swallow.

“It’s really heartbreaking, when a lot of small businesses owners … are stressing to hell about, ‘How am I going to make it to the end of the week?'”

Investors must remain steadfast amid volatility and rate hikes