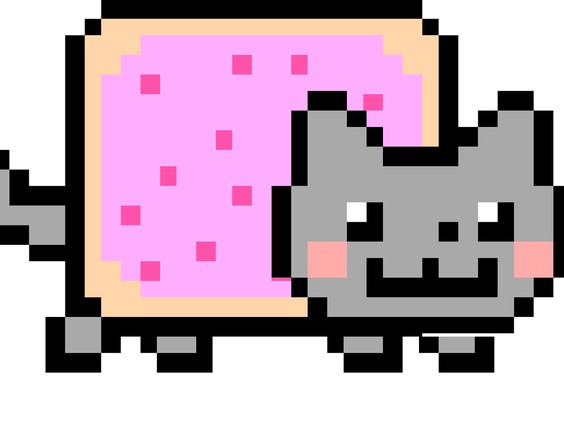 The Nyan Cat, a gif of a cat with a Pop-Tart body and rainbows that sold for nearly US$600,000. PHOTO BY GREENYPHATOM/IMAGES

The 2020s are being shaped early on by the pandemic, but may ultimately be remembered as the decade of digital evolution, depending on the permanence of cryptocurrencies/digital central bank currencies, non-fungible tokens (NFTs) and the emergence of the metaverse.

Many of the technological innovations under development are certainly overhyped, but there is likely some version of the future in which more of our everyday lives are managed online through new technologies and systems. NFTs may be a prime example here: an innovation that has resulted in a lot of hype (and some fraud), but may also shake up markets and transactions in ways that seem implausible to us at the moment.

NFTs have existed since 2014, but have gained popularity over the past two years with the kind of speculative frenzy that drove investors to assets such as cryptocurrencies and meme stocks such as GameStop Corp. and AMC Entertainment Holdings Inc. Unsurprisingly, both companies are looking to double down on their meme-ishness by diving into the NFT movement. GameStop, in particular, is looking at creating a whole new marketplace for NFTs related to video games — speculation feeding off speculation.

Most of the headlines in this space relate to digital art: the Christie’s auction house sale of a digital image by artist Beeple for US$69.3 million in March 2021 is currently the poster child for the explosion in NFT demand. Indeed, the trading volume of the largest NFT marketplace, OpenSea, is expected to surpass US$6 billion by the end of January (driven by a popular NFT collection called Phanta Bear on the Ethereum blockchain, where most NFTs are traded).

This speaks to the growing attention to NFTs in 2022. The market generated US$23 billion in trading volume in 2021, up from only US$100 million in 2020, based on data from blockchain analytics company DappRadar. Google trend data also show searches for NFTs taking off in early 2021, around the time of the Beeple campaign, hitting their highest levels in the first few weeks of January 2022.

But digital art isn’t the only use. Music, sports clips, gambling, trading cards, real estate and digital goods are also being sold as NFTs on various marketplaces in virtual (metaverse) worlds such as The Sandbox and Decentraland. And because NFTs are essentially digital contracts that can be traded and tracked using blockchain technology, there are many more ways in which they could be adopted in the future.

Decentralized ledgers could potentially simplify and secure record keeping for legal documents, contracts or real-world mortgages, among other documentation where verifiable ownership is important (which could upend many of the record-keeping intermediaries that currently exist). There is also an argument that the growing popularity of NFTs has brought blockchain technology into the mainstream more so than before, something that will expand its use into other areas such as cross-border payment facilitation, which could, in turn, disrupt traditional banking and finance. But this is likely quite a long time away, if ever.

The main problem with NFTs seems to be there is little evidence they will hold any value over time. It is very likely that the majority of NFTs issued over the past year could be worthless once the bubble for speculative assets has passed its peak. On top of that, there is growing concern of the environmental costs associated with trading NFTs. As many are aware, the “mining” process required for bitcoin, ether and other cryptocurrencies that follow a “proof-of-work” system is incredibly energy intensive. And while NFTs currently occupy a relatively small share of cryptocurrency transactions, trading the tokens has a much larger carbon footprint than other digital dealings. Indeed, a CBS News article quotes a study that estimates emissions from NFT trading are as much as 10 times higher than the average ether transaction.

That said, there has been a considerable push towards environmentally friendly technology within the blockchain space in recent years. Companies that are revolutionizing the mining process by developing carbon neutral solutions (such as CurrencyWorks Inc.) are gaining traction, as are cryptocurrencies that follow a “proof-of-stake” framework (like Cardano, Avalanche and Polkadot), which are considerably less energy intensive since they don’t require the mining process. Of note, Ethereum has unveiled plans to roll out a more efficient “proof-of-stake” system (to be called Ethereum 2.0), a shift that Offsetra Ltd., a carbon-offset company, estimates could reduce CO2 emissions associated with NFTs by 99 per cent.

The bottom line here is that NFTs are in a clear bubble. That isn’t to say there is no useful purpose for them. After all, art is subjective. If a red square can be considered valuable, avant garde for its era and stored in a museum, perhaps there is value in the first-ever tweet (sold as an NFT for US$3 million) or Nyan Cat (a gif of a cat with a Pop-Tart body and rainbows that sold for nearly US$600,000).

The existence of prints or copies of art in the real world doesn’t necessarily destroy the value of the original, either, and the ability of content creators to track and profit from their work over time since all transactions are copied into one digital ledger does seem appealing.

From an investment standpoint, we don’t recommend engaging in the speculative fervour of celebrity- and fast-food-chain-endorsed NFTs, but it is a space worth watching for its evolution into potentially more enduring and practical applications.

There is now an NFT exchange-traded fund (the Defiance Digital Revolution ETF with US$10.6 million assets under management) that tracks companies generating revenue from blockchain technology, cryptocurrency and NFT-related activities, and likely more investment vehicles will be developed in this space. But to invest in NFTs directly at this point requires significant due diligence and a high risk tolerance as scams, legal rights and security concerns remain high in this unregulated market.

The State of Venture Capital in Canada