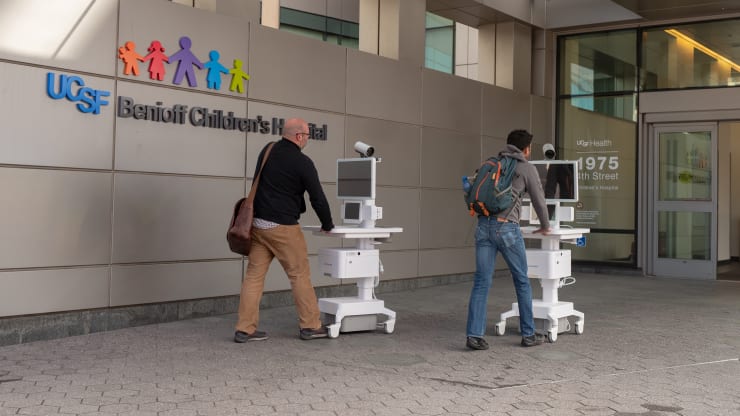 As companies across the U.S. see plunging demand from two months of economic shutdown and sky-high unemployment, investors are finding comfort in digital health, where the transition to remote services is happening at warp speed.

From telehealth to remote monitoring tools, publicly traded companies and venture-backed businesses are experiencing surging growth, aided by an insurance industry that’s now paying for its customers to use non-traditional services while they’re sheltered in place.

Hospital systems are reporting massive spikes in virtual visits. Ochsner Health in Louisiana, one of the coronavirus hotbeds, said it’s conducted more than 120,000 virtual consultations so far this year, compared to 3,300 in all of 2019.

“Things that were 10 years away are now here,” said Jake Dollarhide, CEO of Longbow Asset Management, which owns shares of Teladoc, a provider of remote health care. “As companies question, do I need a permanent office or as large an office, they’re also going to say, how do I save on health plans.”

Since the stock market peaked on Feb. 19, the S&P 500 has fallen 13% as of Friday’s close. Over that stretch, Teladoc has climbed 48%, while digital health management company Livongo has more than doubled. One Medical, which offers in-person and virtual services, has jumped 52%.

“What we’ve seen with Covid is it’s been the catalyst in many ways for people to rethink lots of different areas of life, and access to and delivery of health care is one of the first and foremost,” said Brian Cuneo, global co-chair of the life sciences and health care group at law firm Latham & Watkins. “We’re seeing a ton of innovation and a ton of capital pouring into these markets.”

Hospitals and clinics are focused on keeping patients safe at home while also delivering adequate treatment. The Centers for Disease Control and Prevention recommends that people who suspect they might have Covid-19 coordinate a telehealth visit before going to the emergency room, where they risk exposing others.

At the same time, governments are relaxing rules that made it challenging for telehealth companies to grow. For instance, several states have made it easier for doctors to practice across state lines without requiring additional licenses, and the federal government has agreed to reimburse doctors equally for virtual and physical visits.

Steve Kraus, a partner at Bessemer Venture Partners who’s been exploring the health-tech space for more than a decade, said that it used to be a “Sisyphean task” to move telemedicine forward. The pandemic has changed the landscape.

“I said to my partnership, ‘let’s not overthink it if the tailwinds are behind us,’” said Kraus. “The Covid moment is real. If you don’t have to push consumers, it’s a lot easier to grow. So yeah, we’ll look at it.”

The U-turn in the market can be seen most clearly with Livongo, which offers a coaching service that helps people manage chronic conditions. After the company’s IPO in July, the stock lost more than half its value over the next two months and largely stayed flat until mid-March.

Since then, shares have almost tripled.

Livongo sells to large employers and health plans, who offer it to their employees and members. Earlier this month, the company reported a 115% increase in first-quarter revenue and raised its guidance for the year. At the same time, it announced a contract with the Government Employees Health Association, which covers more than 2 million people, to provide its digital tools for monitoring diabetes and hypertension and for helping prevent diabetes.

Piper Sandler analysts estimate that the new contract could provide Livongo with 10,000 more customers this year, and said the company is positioned to pick up business from Medicare recipients, whose age makes them more likely to have high blood pressure or diabetes.

“We think remote patient monitoring will be part of the ‘new normal,’” wrote the analysts, who recommend buying the stock.

Livongo founder and Executive Chairman Glen Tullman predicted that hospitals will increasingly start separating patients they need to see in-person versus those they can treat remotely. Services that provide home monitoring are taking off, he said, because they help medical teams determine whether an issue is urgent. For example, the company is now pulling data from more than 20,000 blood pressure checks per hour.

Covid-19 “has been beneficial for our business, which is hard to say,” Tullman said. “You never want to benefit from something so terrible, but we are where we are.”

Teladoc, which offers phone-based and online medical visits, also raised its forecast in its earnings report at the end of April, after remote health visits jumped 92% from the prior year.

‘Suddenly now we’re in the future’

But even with the huge increase in demand, telehealth remains a costly business because companies need to hire expensive medical experts to scale up.

Teladoc said its gross margin for the quarter, or the percentage of revenue remaining after subtracting the costs of goods sold, fell to 60% from 65% a year earlier in part because of $4 million in “incremental investments made to rapidly expand physician capacity in response to the outbreak of COVID-19.”

The rally in Livongo and Teladoc shares has dramatically pushed up the revenue multiples, as investors now bet that they’ll look more like high-growth tech companies. Teladoc is trading at about 21 times revenue, roughly double its five-year average, according to FactSet (the company went public in July 2015). That puts it in the same category as Slack and is more than twice Salesforce’s multiple. Livongo’s price-to-sales ratio of 26.8 has doubled since the end of last year.

Neither company is yet profitable on a GAAP basis. Livongo lost $5.6 million in the latest quarter, and Teladoc reported a net loss of almost $30 million.

Still, investors are more bullish than ever. Not only did Teladoc’s stock climb to a record in April, but the company just closed a $1 billion convertible debt sale, increasing it from $800 million. The notes, which convert to equity based on the stock performance, carry an interest rate of only 1.25%. At the same time, Carnival is raising debt at a rate of 11.5%, and Airbnb is paying between 9% and 11.5% on about $2 billion worth of new debt financing.

Meanwhile, Amwell is exploring an IPO, according to people familiar with the matter, and is seeing 1,000% spikes in the overall number of virtual visits, and even bigger increases in certain geographies.

“No one ever modeled this level of growth,” Dr. Ido Schoenberg, Amwell’s CEO, told CNBC.

MDLive, another competitor in telehealth, says it’s seen growth jump from its steady rate of 35% annually to 100% or more in the last couple months. CEO Charles Jones said the company is on track to pull in $115 million in revenue this year, and is approaching profitability.

“This pandemic just accelerated what we might have seen in four or five years,” Jones said, in an interview. “Suddenly now we’re in the future.”

Bessemer’s Kraus sees plenty of room for players across remote medicine to make inroads because most telehealth companies have utilization rates of less than 10%, meaning that if an employer offers the service, only one in 10 employees use it. Kraus says a third of medical problems or more can be taken care of online.

“There’s a ton of space to grow,” Kraus said. “Telemedicine is way under-penetrated.”

U.S. lifts steel and aluminum tariffs on Canada and Mexico