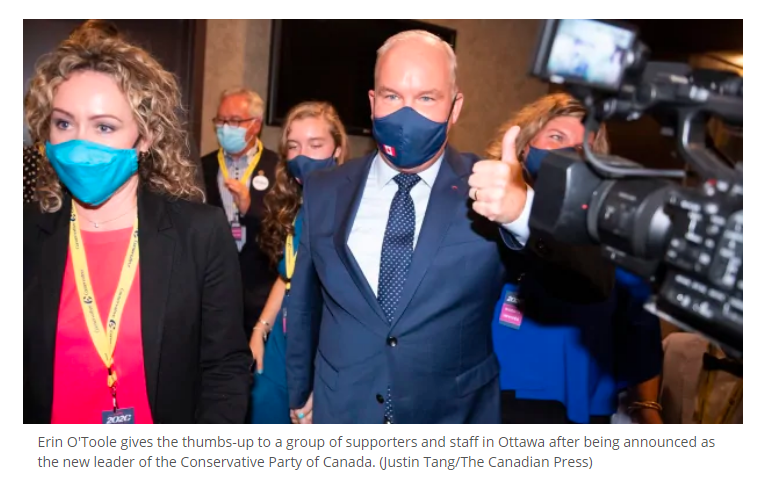 Newly elected Conservative Leader Erin O’Toole kicked off his first day as leader of the Official Opposition today by speaking with Prime Minister Justin Trudeau about some of the issues the two leaders are expected to battle over in the coming months.

The pair spoke about national unity and the dissatisfaction with the Liberals in Alberta and Saskatchewan that saw them shut out of both provinces in the last federal election, said both a PMO spokesperson and a statement issued by O’Toole’s office.

“Mr. O’Toole made a point to raise Western alienation and called on Mr. Trudeau to outline a plan to address real and serious national unity concerns in the Speech from the Throne,” said a statement issued by O’Toole’s office.

The PMO spokesperson also said O’Toole and Trudeau, who spoke by phone, discussed pandemic funding and Trudeau’s decision to prorogue Parliament until September 23 — when the Liberals plan to return to the House of Commons with a new speech from the throne that will trigger a confidence vote by MPs.

Until the House returns, the parliamentary committees looking into whether the prime minister had any role in awarding of a contract to WE Charity to administer a $900 million student grant program have been shut down.

The statement from O’Toole’s office says he raised with Trudeau the matter of having parliamentary committees resume their investigations into the WE Charity controversy as soon as possible. The PMO spokesperson said the committees are not directed by the prime minister and would resume work after Parliament returns, on their own timetables.

O’Toole spent today working from his office in the West Block of the parliamentary precinct, where officials from his team met with officials from ex-Conservative leader Andrew Scheer’s team.

A Conservative Party spokesperson said Scheer and O’Toole continued their discussions over lunch.

Ontario Premier Doug Ford also congratulated O’Toole and urged the federal party to rally around its new leader. He also said that he would not be campaigning on behalf of the federal Conservatives in the next election.

“I won’t be campaigning for anyone, like I didn’t last time either. I am so swamped right here, I’m going literally around the clock every single day and I can’t take my eye off the ball for an election or anything else,” he said. “My main focus is Ontario and always will be Ontario.”

Ford also said he’s willing to work with federal politicians of any stripe.

“We have a phenomenal relationship,” Ford said of his experience working with the Trudeau government and, specifically, newly appointed Finance Minister Chrystia Freeland.

“I think the world of [Freeland]. We were able to get a lot accomplished just by communicating, collaborating along with the prime minister as well.”

It remains to be seen just how unified the party is after a heated leadership campaign — one that saw O’Toole’s campaign ask the police to investigate the alleged hacking of private campaign information on the part of Peter MacKay’s team.

People’s Party of Canada Leader Maxime Bernier — who ran a close second to Scheer in the 2017 Conservative leadership race — today accused O’Toole of putting on a “true blue mask” to win the leadership.

“On every major issue, the Conservative party under Erin O’Toole will be just like the Liberals,” Bernier said in a statement.

The PPC leader issued an appeal to supporters of the two socially conservative candidates in the leadership contest — Leslyn Lewis and Derek Sloan.

“I want to tell them today: There is a place where you can fight openly for your values. Where they won’t be disparaged or shut down, but will be proudly championed,” Bernier said in a statement. “You have a home. It’s the People’s Party of Canada.”

Sloan later told CBC that, despite his loss, he’s pleased with the outcome of the leadership contest because it left the party with a clear winner. He also dismissed Bernier’s criticism of the race.

“He does have to maintain his brand being a separate party but I’m not concerned,” Sloan said.

O’Toole will hold a press conference on Parliament Hill Tuesday morning. He’s expected to announce some key positions in the opposition.

In a statement congratulating O’Toole, Suzanne Cowan, the president of the Liberal Party of Canada, said the Liberals are the only party that will “invest in the middle class and the most vulnerable, keep Canadians safe and supported, and protect a clean environment.”

“On behalf of Liberals across Canada, I want to congratulate Erin O’Toole on becoming the leader of the Conservative Party of Canada and the Official Opposition. I have great respect for those who put their name on a ballot and step forward to contribute to our democracy,” Cowan said in the statement.