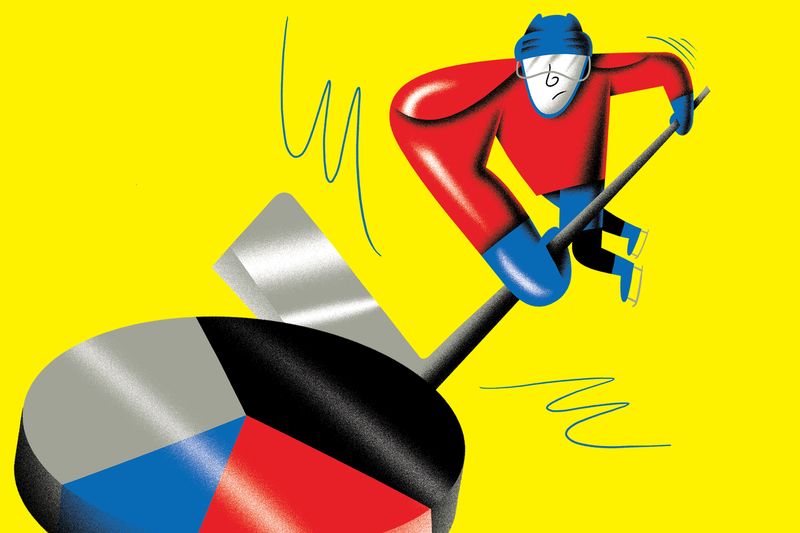 For hockey fans, this year’s playoffs have been as good as it gets. After a competitive season flush with scoring, the National Hockey League’s yearend tournament has seen a half-dozen series go all the way to seven games. In almost half of the matchups, the winner has come from behind. And in one semifinal game, the Colorado Avalanche scored three times in just over two minutes, helping put the team into the Stanley Cup final against the two-time defending champions, the Tampa Bay Lightning.

For ESPN, which last year won the right to broadcast NHL matches through 2028, the playoffs have been equally thrilling. Games have averaged 1.1 million viewers, the company says, up 30% from NBC Sports’ broadcasts last season. Subscribers to the ESPN+ app, which also airs the NHL, have climbed 62% in the past 12 months, to 22.3 million, after years of anemic growth for the $7-a-month service that includes more than a dozen sports. Hockey has been a “significant” part of the recent bump, says ESPN Chairman Jimmy Pitaro.

ESPN’s experience illustrates that even as couch potatoes watch less broadcast television and spend more time on streaming services, there’s still value to good ol’ TV. The trend is toward content spread across multiple channels, with marquee events such as the Super Bowl, World Series, and Stanley Cup on network television, a limited number of games on cable, and the majority streaming. That strategy will let media companies boost subscriptions to their streaming services without alienating cable-TV distributors, says Daniel Cohen, a media rights consultant with Octagon in New York. “We’re going to see this model for the next five to seven years until streaming matures,” he says.

As bidders prepare for auctions by other sports—Formula One, some big college conferences, and the National Basketball Association will be selling rights in the next few years—the betting is that the winners will adopt a similar strategy. More eyeballs spread among more channels will allow the likes of Disney, Warner Bros. Discovery, Paramount Global, and Comcast to commit more money to sports. “The original narrative was that old platforms will die, the NHL will stream games themselves, or Amazon will, but that is not what we have here,” says Patrick Crakes, a media consultant in Los Angeles.

The big winners will be the sports leagues. ESPN will pay the NHL $400 million annually. That deal, along with a $250 million-a-year agreement with Warner’s Turner Sports unit for a separate package of games, means the league will receive more than double what it got from NBC. “I’m thrilled,” says NHL Commissioner Gary Bettman. “ESPN’s numbers, our numbers, Turner’s numbers—they’ve all grown substantially.”

Still, stretching sports programming across multiple outlets is no instant cure for the twin challenges of soaring fees for rights and the expenses of creating an online-TV business. Programming and production costs at the ESPN+ unit jumped 48%, to $454 million, in the quarter ended in April, largely because of the NHL deal. And Disney says its direct-to-consumer business, which includes Disney+, Hulu, and ESPN+, lost $887 million in the period.

To keep up with rising fees for sports rights, media companies are getting creative in spreading the costs and generating more ad revenue. Disney last season aired some Monday Night Football games on both ESPN and ABC. And an alternate broadcast hosted by brothers and retired quarterbacks Peyton and Eli Manning has been a hit on ESPN2.

In the NHL deal, the company got the rights to air 25 regular-season games on ABC or ESPN and 75 on ESPN+ and Hulu. In addition, ESPN+ offers hundreds of hockey games that normally run on local channels, providing succor to, say, Chicago Blackhawks fans living in Detroit, Denver, or Dallas—and letting them choose which team’s announcers they listen to. And hockey addicts can watch Ice Cast, a statistics-heavy ESPN+ version of games airing on network TV. The NHL contract “was really the first deal that we did that cut across all of our platforms,” Pitaro says. “We do view it as a prototype for what’s to come.”

ESPN, which aired hockey for decades before losing the rights to NBC in 2005, has played on nostalgia—reusing its old theme song, for example, which it reintroduced in a video segment narrated by Toronto Maple Leafs superfan Justin Bieber. Hall of Famer Mark Messier joined the broadcast team as lead studio analyst. And SportsCenter anchor Linda Cohn hosts In the Crease, a highlight show on ESPN+.

The network is also moving beyond games, with content such as The Point, a hockey-themed show introduced last year. One segment featured New Jersey Devils centerman Jack Hughes, who has a $64 million contract but, like a lot of 21-year-olds, shares an apartment with a roommate. Another focused on a Seattle Kraken fan who spotted a cancerous growth on the neck of a manager for the Vancouver Canucks during a game and persuaded him to get it looked at. The network says its strategy has paid off: ESPN’s female viewership is up 73% from last year, and interest among people age 18 to 34 has increased 87%.

One of those is Boston University senior Caroline Fernandez. The recent convert to hockey doesn’t have a traditional cable-TV subscription, so she’s been following both the Bruins and the New York Rangers on ESPN+ with friends at home. And when she goes out, she often heads to sports bars that carry ESPN. “It’s more accessible,” Fernandez says. “There’s definitely more female viewers, even just in my circle.”