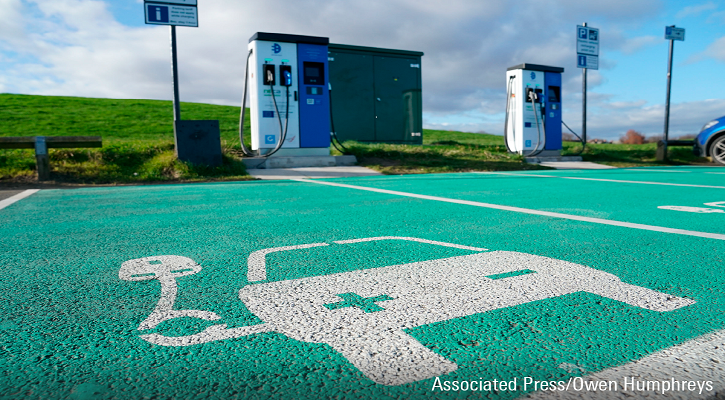 For the past two years, global supply chains have been surrounded by a perfect storm. In an environment where this should show signs of easing, the electric car industry is becoming increasingly exposed.

Electric vehicles, or EVs, are one of the cornerstones of the green transition in many countries, and many governments are promoting policies to increase both adoption and production. Last year, EVs accounted for 5% of new cars being sold globally. This year, adoption rates and sales are expected to be even higher as they become (supposedly) both cheaper and more functionally comparable to an internal combustion engine (ICE) vehicle.

“As more EV models are released by not only Tesla (TSLA) but by the legacy automakers and new entrants, consumers have more options and more EVs will get sold,” he says.

“Even if we entered a global recession, EV sales would likely either remain flat or even move higher just due to more models being converted from traditional ICEs to EVs.”

But, while demand is indeed increasing, the production aspect is not as straightforward. According to the International Energy Agency (IEA), China is a major player in the battery production space. It accounts for over three-quarters of all lithium-ion battery production, and for over half of all cobalt processing and refining capacity.

Moreover, in 2021, 70% of global supply was mined in the Democratic Republic of Congo, followed by Russia – and as we know, both these countries have high geopolitical and ESG risks. So how are EV battery producers and car manufacturers managing supply challenges?

Other countries are also attempting to up their supply chains within the EV space. According to Benchmark Minerals Intelligence, Europe has plans to reach a total capacity of 789.2 GWh (Gigawatt hours) by 2030. That would be enough to support the assembly of nearly 15 million pure electric vehicles.

In the US, the newly-minted Inflation Reduction Act provides subsidies for EVs and plug-in hybrids, provided that a minimum percentage of critical minerals like lithium come from the US or its free trade partners.

If achieved, both measures will help ease the supply chain issues, but the risks of using raw material from conflict countries like the DRC remain, as Sustainalytics recently reported.

It is estimated that 15-30% of the DRC’s global cobalt supply comes from small-scale and artisanal miners, where labour rights are lacking, a lack of equipment persists, and some mines are dug illegally. In 2019, 43 miners died in a collapse of a cobalt mine owned by Glencore in the Kolwezi area, and, in 2014, UNICEF estimated around 40,000 children worked in cobalt mines in the DRC. This number is reportedly starting to decline.

Mineral waste from mines can pollute rivers and freshwater sources and have a direct health impact on people, animals and crops. And the processing of cobalt generates tailings, which can have adverse impacts on the environment if not treated and stored properly.

There are also risks related to the scarcity of key raw materials overall, and mineral explorations are underway in other regions. Recently, it was rumoured that some billionaires, including Jeff Bezos, Michael Bloomberg and Bill Gates, are funding the search for critical minerals, including cobalt and nickel, in Greenland as ice vanishes.

Their efforts to manage the supply challenges posed by reliance on cobalt range from developing cobalt-free batteries, such as lithium-iron-phosphate or LFP (Panasonic, Samsung), to acquiring stakes in a cobalt mine (CATL) or setting up joint ventures that help secure a stable supply of raw material (LG).

The use of blockchain has also been tested by the likes of Stellantis (STLA), Volkswagen (VWAGY) and Volvo (VOLV) to track the entire supply chain. Tesla (TSLA), which already tracks cobalt from mine to end-use, announced earlier this year that about half of the vehicles produced use cobalt-free batteries.

But reducing reliance on cobalt and high-risk regions is a long-term game, as is EV manufacturers’ efforts to make the supply chain more sustainable.