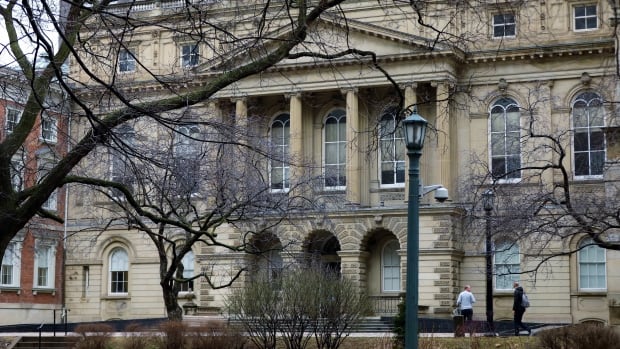 A view of the outside of the Ontario Court of Appeal in Toronto. Interested Canadians have a rare opportunity this week to watch Ontario's top court sort out a federal-provincial legal battle over carbon pricing. It is the first time in more than a decade cameras are being allowed in the Court of Appeal to live stream an event. (Colin Perkel/The Canadian Press)

The federal government will end up with the power to regulate almost every facet of life — such as when you can drive or where you can live — if its law aimed at curbing harmful greenhouse gas emissions is allowed to stand, Ontario’s top court heard Monday.

Ottawa’s climate change law is so broad, a lawyer for the Ontario government told the start of a four-day Appeal Court hearing, that it would give the federal government powers that would be destabilizing to Canada in the name of curbing the cumulative effects of global warming emissions.

“They could regulate where you live, how often you drive your car,” Josh Hunter told the five-justice panel. “It would unbalance the federation.”

Hunter said Ontario’s constitutional challenge to the federal Greenhouse Gas Pollution Pricing Act was not intended as a debate on the realities or dangers of global warming. What’s at stake, he said, is which level of government has the power to deal with the problem.

“Which measure is the best measure — the most efficient measure — is best left for legislatures to decide,” Hunter said. “Which legislature? That’s what we’re here to decide.”

The federal law that kicked in on April 1 imposes a charge on gasoline and other fossil fuels as well as on industrial polluters. The law applies only in provinces that have no carbon-pricing scheme that meets national standards — Ontario, Manitoba, Saskatchewan and New Brunswick.

The Liberal government, which is due to make submissions on Tuesday, insists its law is an appropriate response to the
nationally important issue of climate change. The aim, the government says, is to cajole people into changing their behaviour.

The justices repeatedly pressed Hunter to explain what Ottawa should do if a province doesn’t want to tackle greenhouse gas emissions, thereby undermining other provinces.

“When you think about air pollution, the word ‘Ontario’ sort of dissolves with the air,” said Justice James MacPherson. “It’s national and international.”

Hunter agreed cross-provincial solutions were needed, just not what Ottawa has put in place.

Progressive Conservative Premier Doug Ford has said Ontario can curb greenhouse gas emissions on its own and has already taken significant steps to do so.

Those steps, Hunter told court, include shutting down coal-fired power plants — a measure taken by the previous Liberal government — which has sharply reduced the province’s harmful emissions.

“Ontario is further ahead than all the other provinces,” Hunter said. “[But] none of those [steps] count toward determining whether Ontario has a stringent plan.”

In addition, he said, the province is developing a “made in Ontario environmental plan” that is still under consideration.

Hunter also argued the law slaps a “tax” on ordinary people every time they drive to work or heat their homes. In response, the justices pointed out that Ottawa is promising to return almost all the money it collects to people in the affected provinces.

Hunter, however, said the rebates — via the federal climate action incentive — flow to everyone in the province regardless of whether they even drive, for example.

“It’s not just that you get back what you give,” he said.

Hunter’s co-counsel Padraic Ryan said even if the justices accept the law as constitutional, the charge as levied on carbon is illegal. Giving everyone a tax does not help reduce greenhouse gases, he said.

“We say it is a tax that has not been authorized,” Ryan said. “The charges imposed under the act are unconstitutional taxes.”

Fourteen interveners, including provinces such as Saskatchewan and British Columbia, Alberta Conservatives, Indigenous organizations who point out they are acutely vulnerable to global warming, as well as business and environmental groups, will get their say over the course of the hearing, which continues on Tuesday.