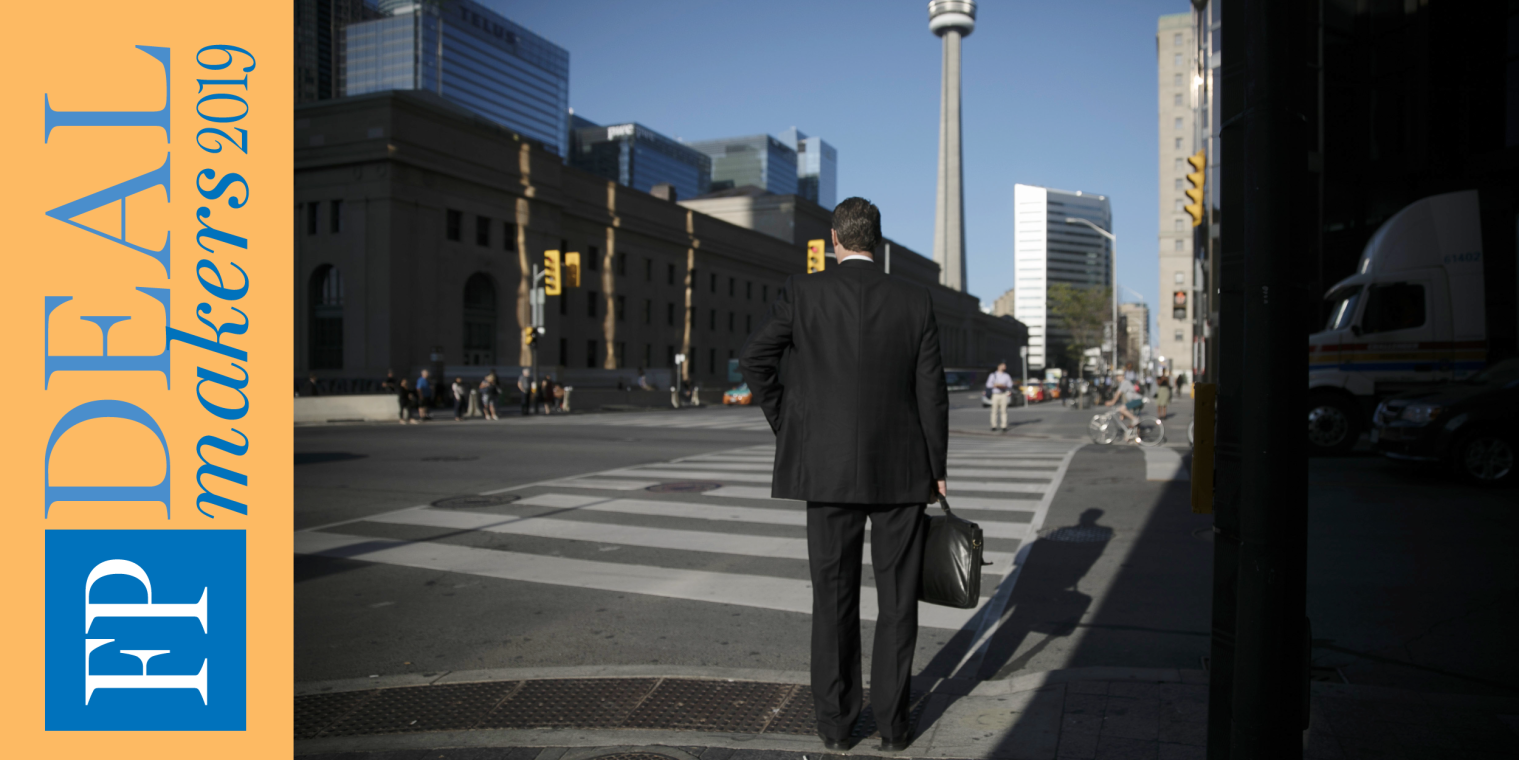 2018 was a tough year for dealmaking but on the bright side, private capital is currently sitting on nearly $2 trillion, waiting to pounce on opportunities

After basking in the glow of a record-breaking 2017, Bay Street saw Canadian dealmaking pull back last year, as volatility in the markets and adversity in the oilpatch combined to curb sales of shares and bonds.

Close to $358.4 billion in debt and equity was sold by Canadian issuers in 2018, down 11 per cent from the record $403 billion seen in 2017, according to Financial Post Data. The data tallies all the financings Bay Street raised on behalf of Canadian-incorporated issuers during the previous year through equity deals, corporate debt and government debt offerings.

Part of the reason for the downturn in 2018 was a lack of major deals. Derek Neldner, head of global investment banking at Royal Bank of Canada’s RBC Capital Markets, noted in previous years there had been some larger acquisitions (and subsequent share sales) where Canadian companies had been the buyers.

“Candidly, it was a tougher year in Canada last year,” Neldner said. “The number of financings was down, but where the bigger impact was felt was in the value, because we saw fewer large deals, or sort of mega-deals.”

The mega-deals have traditionally come from the energy sector. The oil and gas industry, however, found itself challenged in 2018 by low commodity prices and investor sentiment that was weighed down by Canada’s pipeline debate.

“The majority of that decline was attributable to the energy space, where it went from being 50 per cent of issuance in the previous two years, to about five per cent this year,” Corona said.

Despite the shortage of big-ticket deals, nearly $360 billion was raised by Canadian issuers last year, with RBC Capital Markets leading the way in total financing once again. According to the Post’s methodology, the firm was atop the league table by acting as bookrunner on 213 deals totalling around $51.4 billion.

Second again in the rankings was Toronto-Dominion Bank’s TD Securities Inc., which was in on 174 deals worth $45.7 billion.

Third in total financings was CIBC World Markets Inc., moving up from its fourth-place finish in 2017. Moving up one spot from last year as well, to fourth, was National Bank Financial Inc., followed by BMO Capital Markets, which fell from third for 2017 to fifth for 2018.

Scotia Capital Inc. stayed put in the rankings at sixth. HSBC Securities (Canada) Inc. was seventh, ahead of the first U.S. firm on the table, Bank of America Merrill Lynch. Rounding out the rest of the top-10 were Citigroup Global Markets Inc. at nine and J.P. Morgan Securities LLC at 10.

Government and corporate debt sales were down by more than six per cent and 10 per cent, respectively, for 2018. The dollar amount of ownership equity, preferred equity and structured-product deals were down more than 25 per cent, 34 per cent and 23 per cent.

The past year’s total Canadian issuance was the lowest since 2014, when securities sales were $346.6 billion. It also marked the first year-over-year decline since 2010, when the value of issuances in the year finished 0.64 per cent lower than 2009 (although, in 2011, there was only a 0.01 per cent increase in sales over 2010, according to Financial Post Data).

In Canada, there were concerns about the country’s competitiveness compared to the U.S. economy that had been boosted by a corporate tax cut. Moreover, markets also spent much of 2018 worrying about tariff threats, rising interest rates and the renegotiation of the North American Free Trade Agreement.

That volatility, kicked up after a relatively calm 2017, left dealmakers and issuers facing a tougher environment for financing.

“There’s no doubt that 2018 was the year of volatility,” said John Armstrong, the deputy head of investment banking at BMO Capital Markets. “If you are a believer in the concept that fear and greed drive markets, I would say that fear had the upper hand in 2018.”

As always, most of the money raised last year was in corporate and government debt, which accounted for approximately $323.5 billion of total securities sales of Canadian issuers in 2018. Meanwhile, the eight biggest deals of 2018 were all courtesy of the Canada Housing Trust, which rattled off eight issues of mortgage bonds that were each worth more than $4.4 billion.

Canadian banks also began issuing “bail-in” bonds in 2018 as well, after the federal government put a new framework in place to deal with distressed lenders. RBC was the first bank to issue the new bonds, with RBC Capital Markets one of the bookrunners on the approximately $2.3-billion issue in the fall.

The Canada Pension Plan Investment Board’s also issued a $1.5-billion green bond transaction that it said was a first for pension funds.

There was even innovation, with BMO Capital Markets announcing in August that it had successfully “mirrored” on blockchain the sale of a $250-million, one-year, floating-rate deposit note to the Ontario Teachers’ Pension Plan.

In equity, the biggest issue of 2018 was an approximately $1.7-billion share-sale by Bank of Nova Scotia (led by the Bank of Nova Scotia-owned Scotia Capital), which was financing its $2.6-billion acquisition of physician-focused wealth firm MD Financial Management.

One of the other bright spots for 2018 was cannabis, and with Canada’s official legalization of recreational marijuana in October, the sector saw a number of reverse takeovers as a means of going public. This included a landmark $520 million that was raised by U.S. cannabis company Curaleaf Holdings Inc., which was in connection with a Canadian listing.

The year’s sales of common, trust and convertible debt share-sales were led by cannabis-friendly Canaccord Genuity Corp. In 2018, the firm notched 123 total deals worth $3.2 billion.

Canada’s legal advisors were also in the thick of things, with McCarthy Tetrault LLP leading the pack with advisory duties in deals valued at $19.4 billion, while Blake, Cassels & Graydon LLP led the way in terms of the number of deals, with advisory role in 45 transactions.

“For law firms, it was a busy, busy year with respect to cannabis issuers who were accessing the market,” said Eric Moncik, practice group leader for Blake’s Toronto capital markets practice. “We also saw technology, financial services, health care — it really was broad-based.”

Despite what was technically a down year in 2018, there is optimism among dealmakers for 2019. It may, however, take some help for those dreams to come true, such as a calming of markets.

“And particularly in Canada, for commodity prices to improve,” Corona said.

Lower volatility could also convince some private companies to take the plunge into the public markets.

On the mergers and acquisitions front, 2019 has already seen a major move in the mining sector, with Denver-based Newmont Mining Corp. striking a US$10-billion deal to buy Canada’s Goldcorp Inc. BMO Capital Markets was tapped by Newmont as one of its financial advisors, while TD Securities is doing the same for Goldcorp. The deal is yet to close.

“We’ve got lots of money in PE (private equity) funds and pension funds still looking to do deals,” he added. “And, on the M&A side, people will always be trying to do strategic transactions.”

The impact of private equity on Canada is especially strong, according to Roman Dubczak, managing director and head of global investment banking at CIBC World Markets.

Furthermore, Dubczak said the dollar amount of “dry powder” that private capital is currently sitting on is anywhere from $1.5 trillion to $2 trillion.

“It’s a significant amount of money, and it continues to build,” he said.

The economic environment for further deals may remain a favourable one as well. The Canadian and U.S. economies are expected to expand again in 2019, although likely at a slower rate. What’s more, recent signals from central banks suggest they will be selective with future rate hikes, giving the markets hopes for further growth.

Armstrong says BMO is focused on fundamentals that have them “cautiously optimistic” about the year ahead, where stocks will continue to “grind” higher and where interest rates will increase at a slower pace than may have been anticipated.

“There’s no doubt we’re in the final innings,” he said. “But for the foreseeable future we remain optimistic.”

Posthaste: Cheer up, Canadians might get relief from hot inflation sooner than they think