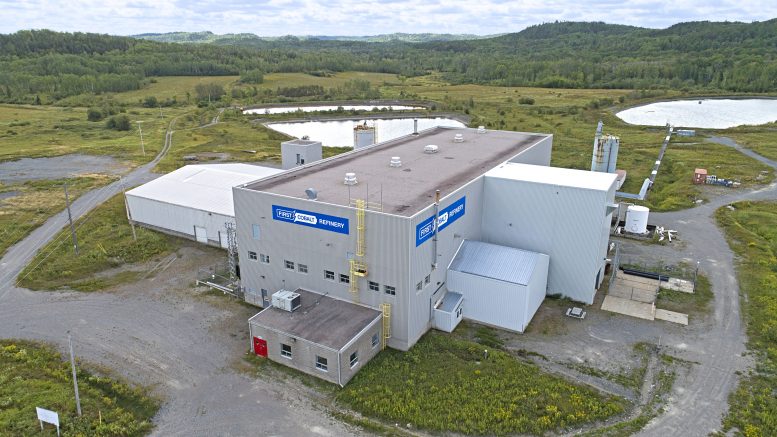 First Cobalt (TSXV: FCC; US-OTC: FTSSF) has secured $10 million in government funding that will allow it to accelerate the development of its cobalt refinery in Ontario, 600 km from the U.S. border.

Under the funding arrangement, the Canadian federal government has agreed to provide a $5 million interest-free loan to the company, while the government of Ontario will give a $5 million non-repayable grant.

“I can’t say enough about the level of support that has been provided to us, with 100% of the proceeds to be put into the expansion and commissioning of the refinery,” Trent Mell, First Cobalt’s president and CEO said in an interview.

First Cobalt is in discussions with a “small group of lenders” to raise the additional $67 million needed for the $77 million project.

“For our lenders, the government funding sent to two clear messages,” he said. “Firstly, it brings down the quantum of money required and, secondly, it sends a strong signal that the government believes in First Cobalt and that there is now a de-risking of the asset in the eyes of the financial and capital markets.”

The government funding, Mell said, is part of a strategy by the federal and provincial governments to “jump into the electric vehicle revolution and to shore up supply chains.”

In December, the federal government unveiled a $3 billion innovation fund to support clean technology development and a supply chain for electric vehicle (EV) batteries, while in October both the federal and provincial governments agreed to support a $1.8 million overhaul of Ford Motor’s assembly plant in Oakville to make EVs.

Cobalt is crucial for the lithium-ion batteries used in EVs, where it boosts the battery’s energy density and extends its life. It also has a stabilising effect and prevents corrosion of the cathode, which can cause a battery fire.

“Global demand for cobalt is increasing as EVs become more widely adopted,” Mell said. “If you take Europe as a template, this year has exceeded all expectations with EV sales up over 100% while conventional passenger vehicle sales are down 20-25%.”

First Cobalt’s refinery would be the only source of domestic cobalt for the North American EV industry, he said, and would also be well-positioned to support the European market. The plant would reduce North America’s reliance on Chinese refineries, which currently supply around 80% of the world’s cobalt.

Once complete, the facility will be capable of producing 25,000 tonnes of battery-grade cobalt sulphate annually, representing 5% of the global market for refined cobalt, Mell said.

First Cobalt plans to secure cobalt hydroxide, a feed material for the refinery, through a long-term purchase agreement with Glencore (LSE: GLEN), which owns cobalt assets in the Democratic Republic of Congo (DRC).

The DRC dominates global cobalt production. However, the country has been beset by claims of illegal mining, corruption, and the use of child labour.

In August, Glencore joined the Fair Cobalt Alliance, which aims to eliminate child and forced labour in the DRC’s artisanal and small-scale mining sector. The initiative is also supported by Tesla, the world’s largest EV manufacturer.

“Our cobalt feed material will be certified as ethically sourced, and we are also aiming to build the greenest cobalt refinery in the world,” Mell said. “Initial estimates indicate that it will generate around half of the carbon emissions compared with benchmark peers.”

He said the feedstock agreement would be finalised in January 2021 and financing locked down towards the end of the first quarter 2021. The company aims to start constructing the refinery in June 2021 and will take around 18 months to complete, with the first cobalt production forecast for the second half of 2022.

At press time in Toronto, First Cobalt was trading at 30¢ per share within a 52-week trading range of 7.5¢ and 38.5¢. The company has around 387 million common shares outstanding for a $116.2-million market capitalization.

SEC V. Ripple: The Cryptocurrency Trial Of The Century