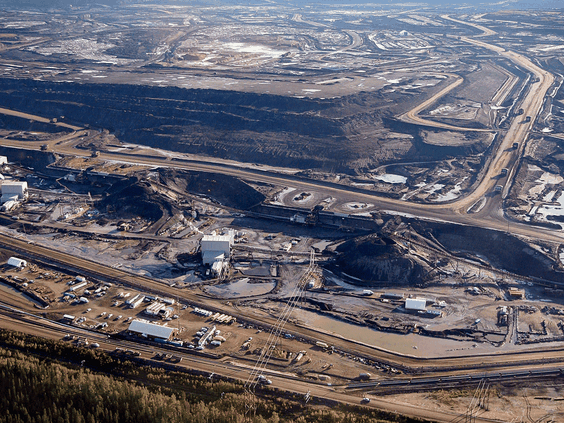 A new geopolitical order is taking shape. The globe is rapidly realigning under American and Chinese spheres of influence and the pandemic has only raised the stakes. How can Canada finally get serious about its internal stability and external security so it can effectively play a role as a middle power? Today, Jesse Snyder examines the worrying trend in our exports.

Economic growth in China and Africa would propel the oil sands to new heights, Harper told a business crowd in London, England, and set the stage for a mega-sized Canadian industry that would rival the “building of the Pyramids or China’s Great Wall.”

In the following years, tens of billions in foreign capital flowed into northern Alberta as the global economy ran red hot, creating a prolonged period of export growth in the region. But the Harper vision was never fully realized. Today, years after a collapse in oil markets in mid-2014, investment in the fossil fuel sector has slumped. Legal and regulatory hurdles have continued to choke off major pipeline projects, scaring off would-be investors.

The slump has exposed Canada’s decades-long dependence on oil exports. Over the past 11 years, Canada has run repeated annual current account deficits, with an average yearly shortfall of between $50-$60 billion (the current account represents a country’s net economic transactions with the rest of the world). The reason, in simple terms, was a gradual decline in oil and gas investments with no clear replacement to make up the difference.

“We were no longer building our future at home, but rather collecting rents in the present on investments from the past, like coupon clippers living off past prosperity,” David Dodge, former governor of the Bank of Canada, wrote in a report for the Public Policy Forum in September.

Dodge, among other observers, says the prolonged current account deficit serves as a useful — if worrying — barometer of the Canadian economy, one that should serve as a warning signal for a federal government focused almost exclusively on redistribution rather than economic growth. Many say it’s time for Canada to get serious about a question that has stumped policymakers for years: how can we materially grow Canada’s exports to ensure a healthy future economy?

While Ottawa’s emergency funding measures aimed at battling COVID-19 only magnifies this account balance, Dodge says it is part of a much broader trend that stretches back years.

“We were already on a slippery slope coming into COVID,” he said in a recent interview with National Post.

Ahead of the 2008 financial crisis, Canada’s exports exceeded imports by a “healthy” margin of three to five per cent, Dodge said in the PPF report. That has since been flipped over for an annual average deficit of negative two to three per cent.

And while annual current account deficits don’t spell trouble for a country, a chronic shortfall can spell trouble as governments continue to draw from the public purse to pay for costly social programs like childcare, expanded unemployment insurance, and healthcare for a rapidly aging population.

“This is not a very sustainable situation,” Dodge said. “You can sustain it for a while, but we know that over time the situation deteriorates as service costs on foreign debts build over time.”

The problem isn’t specific to making up for natural resources outputs, which still contributed a staggering $76.6 billion to the current account in 2019 — about 80 per cent of which came from crude oil and bitumen production. Exports in the automotive and aerospace sectors have continued to decline over the years, while consumption for autos or travel services have increased.

From the beginning of the financial recession until the end of 2019, Canadian investments in assets abroad outweighed foreign direct investments by $804 billion, Dodge said in the report.

Observers are divided over how to address the continued shortfall. Many say the next generation of export-based industries will be in leading-edge products like artificial intelligence, financial tech or electric vehicles, to name a few.

Jim Balsillie, former Blackberry head and chair of the Council of Canadian Innovators, has for years been calling on Ottawa to tighten up rules around intellectual property, which would give home-grown Canadian companies an opportunity to scale up and sell their products to the world. There are particular worries that, in a digital economy increasingly dominated by U.S. heavyweights like Google and Amazon, Canada will increasingly become a “satellite” economy developing IP for foreign firms, and gleaning little of the benefits in return.

Instead, Canada’s trade diversification efforts have largely focused on signing new trade deals with partners — an approach that was necessary in the past, but has now run its course, according to many trade experts.

“The truth is, we’re basically done negotiating trade deals at this point,” said Sean Speer, former Conservative advisor and professor at the Munk School of Global Affairs and Public policy.

Canada has now signed more than 50 trade deals with foreign governments, with varying degrees of success. But observers like Speer say the shortcoming is often in the lack of follow-through. Canadian policymakers often sign trade agreements, partake in photo-ops, and then leave business owners to seek out new opportunities by their lonesome.

“It’s one thing to sign a deal, it’s another thing to take advantage of the new market access that’s been achieved,” Speer said.

Even some recent trade agreements with allies have only created new rifts. In a September letter to four Cabinet ministers, for example, the Canadian Agri-Food Trade Alliance (CAFTA) lamented that Canada’s recent trade deal with Europe “has failed to deliver on its promises for Canada’s agrifood exporters,” and has instead led to an “overall deterioration” in Canada’s trade balance with its European partners.

Nowhere are trade anxieties more prevalent than with the U.S., which still accounts for the vast majority of Canadian exports. A bellicose and protectionist Trump administration has revived long-held worries about Canadian over-dependence on America, prompting a shift in thinking among business leaders.

“The good old days are over,” said Goldy Hyder, head of the Ottawa-based Business Council of Canada, which represents a number of Canada’s largest corporations. “We became a complacent and comfortable country, just relying on the ease of doing business in the United States.”

Hyder is calling for a range of supports for industry to help them expand into new markets. They include more guidance for private firms in navigating foreign markets, and ensuring critical infrastructure like seaports and oil pipelines are built.

Hyder and others are quick to acknowledge that it will be a steep hill to climb, as Canada has for years sought to diversify away from the U.S. market only to deepen its dependency on the world’s largest economy.

It was more than 50 years ago that prime minister Pierre Trudeau told a room full of U.S. Congressmen that sharing a border with the United States was like “sleeping next to an elephant,” in which the smaller country is “affected by every twitch and grunt.”

At the time, relations with the U.S. had soured badly with the election of Richard Nixon, prompting Ottawa to explore new options for trade. That eventually led to the Third Option report in 1972, a trade diversification plan that is widely seen as a flop decades later.

Today, Canada is again in a position where it will need to expand its trade base to reassert itself on the world stage, or threaten to slip into a long and slow decline.

It’s a point that Dodge, the former BoC governor, is trying to highlight as Ottawa assumes increasing levels of foreign-funded debts while seemingly putting little emphasis on economic expansion.

“In the end, we as Canadians cannot consume what we do not produce.”

Balanced ETFs put their own spin on a mutual fund innovation