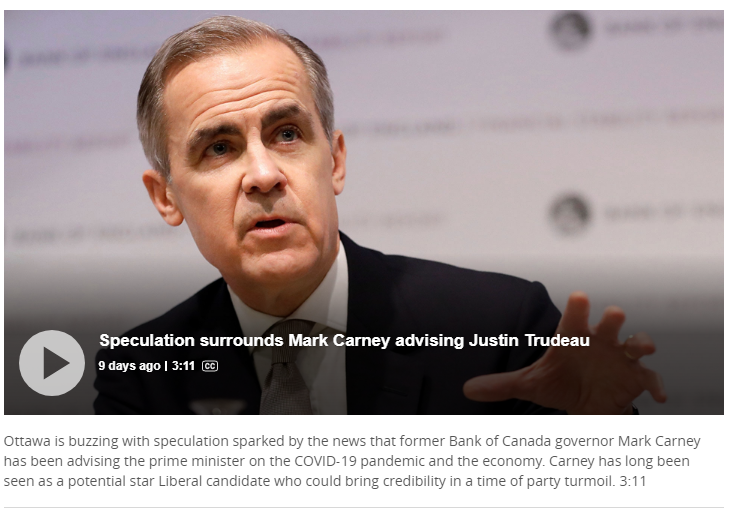 Mark Carney — the former governor of the Bank of Canada and the Bank of England — has been acting as an informal adviser to Prime Minister Justin Trudeau on the federal government’s response to the COVID-19 pandemic.

Carney “certainly has been advising the PM through different phases of this,” said a senior government official speaking on background. “I’d hope we can count on him for more.”

News of the informal role was first reported by Bloomberg on Monday.

Carney has long been rumoured to have political aspirations since returning to Canada after his term with the Bank of England expired earlier this year. Many in Liberal circles see Carney as a top candidate for finance minister should he seek office or as a possible leadership candidate to eventually succeed Trudeau.

With a sudden vacancy in the Toronto-area riding of York Centre there have been rumours that Carney could be a candidate in an upcoming byelection, though senior Liberal sources have repeatedly thrown cold water on that idea.

Carney is well-suited to advise the prime minister during difficult economic times. He led the Bank of Canada during the global financial crisis more than a decade ago and held the top job at the Bank of England during the Brexit uncertainty.

Carney, a former investment banker currently serving as the United Nations’ special envoy on climate action and climate finance, has likened the climate crisis to a financial crisis — and has urged financial sector to help tackle the issue.

The Liberals are under pressure to rein in the economy after pandemic spending helped drive the projected deficit for 2020-21 to $342.2 billion — some ten times higher than expected before COVID-19 — according to a financial snapshot provided last month by Finance Minister Bill Morneau.

Most of that figure can be attributed to the $212 billion in direct support measures Ottawa is providing to individuals and businesses.

Morneau said at the time that, aside from the pandemic program spending, the economic slowdown is estimated to have added another $81.3 billion to the deficit in 2020-21.

The economy is projected to shrink by 6.8 per cent this year before bouncing back by 5.5 per cent next year, Morneau said, making this crisis the worst economic contraction since the Great Depression.

The economy is expected to decline in 2020-21 more than twice as much as it did in 2009-10 in response to the global financial crisis.

Not your ‘same old’ economic plan: Anne McLellan on the coalition that will use the lessons of COVID to plot the next 30 years