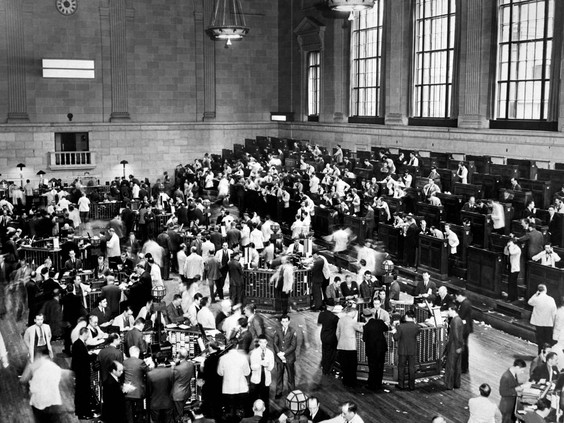 FP Answers puts your investing questions to the experts. This week our expert is John De Goey, a portfolio manager with Wellington-Altus Private Wealth. Whatever your investment question, ask us, because FP Answers.

Q I’ve been reading a lot about the stock market crash of 1929. That was a time when the momentum trend of the market seemed to be more important than company earnings, dividends, assets values and other important analytic stock metrics. What are the chances that we are in a similar market today — where the market churns downwards or sideways for months to years on end? What are the red flags I should be looking out for? And do you think a future crash or prolonged bear market will look materially different from past market crashes?

Alternatively, can you give me the case for “No, we probably aren’t headed for any kind of meaningful stock market crash…. the investing world has indeed changed and stocks will continue going up for several more years.”

What do you believe to be true?

A Harold, I think we’re in an extremely similar situation right now as the Great Depression. If I were to hazard a guess on the actual odds, I’d say there’s an 80 per cent chance we’ll see a significant downturn in the next year. I would be really surprised if the markets (TSX and the S&P 500) were as high on April 1, 2022, as they are today.

Many people don’t realize that in late 1929 and early 1930, there was a strong market run-up that lasted over six months before the precipitous drop started. Thinking historically, the drop in late October 1929 was akin to what we experienced in February-March 2020. The real pain came in 1930. Moving to the present, in the full year since last year’s March 23 bottom, markets have been buoyant. Many think we’re out of the woods. I think we’ve been shot at and missed. The parallel to what happened over 90 years ago is not lost on me.

The real question will revolve around the “then what?” decision. In our lifetimes, there have only been a handful of drawdowns of 40 per cent or more: the response to the oil price shocks in 1974; the aftermath of the dot-com bubble shortly after the turn of the millennium; and the global financial crisis from 2007 to 2009. In all those cases, markets hit a clear bottom and regained their value shortly thereafter.

What will people do if there’s a significant drop? Or, what will they do if there’s a drop and the market stays down (for example, indexes go sideways from the bottom) for years at a time? One reason why I fear many people are unfailingly optimistic about markets (something I call “bullshift”) is that in the past they have always managed to rebound more or less unscathed if people have a medium-term time horizon of four to seven years.

To me, the biggest red flag is the so-called Buffett Indicator, which is Warren Buffett’s personal favourite. It is calculated by dividing market capitalization by GDP. In the U.S., it’s at unprecedented levels. Since the U.S accounts for over half the world’s market cap, I simply don’t see how people can’t be worried. Stated differently: Buffett’s preferred metric for judging market valuations is literally at the highest it has ever been.

My secondary fear is that a possible drop will be accompanied by a prolonged period of capital market listlessness. Apart from some kind of significant event in general, the behaviour of investors and advisors in this environment could prove far more damaging than has previously been the case

The risk of listlessness might even be somewhat self-fulfilling. In the past, people have been eager to get into the market when it starts going up. That eagerness won’t be there if markets move sideways.

I should note that my viewpoint is in the minority. Most of my friends and colleagues seem far less fussed than I am. In fact, some advisors and portfolio managers are not fussed at all and think a new market uptrend cycle has already started. Many contend that this new cycle will last at least another half-decade. The paradigm that my fellow advisors seem to favour is one of benign inflation and highly accommodative monetary policy, combined with “pre-loaded stimulus” (namely, government cheques), along with a new age of innovation and positive disruption that will make for a kind of Goldilocks environment that has few obstacles standing in the way.

But I think historical facts and my own personal analysis will hold up to investor scrutiny in the months ahead.

John De Goey is an IIROC-licensed Portfolio Manager with Wellington-Altus Private Wealth (“WAPW”) in Toronto. This commentary is the author’s sole opinion based on information drawn from sources believed to be reliable, does not necessarily reflect the views of WAPW, and is provided as a general source of information only. The opinions presented should not be relied upon for accuracy nor do they constitute investment advice. For proper investment advice, please contact your Investment Advisor. John De Goey can be reached at john.degoey@wprivate.ca.

‘In Canada, the housing sector has been kind of a ray of hope for the economy in 2020,’ says new BILD Alberta chair