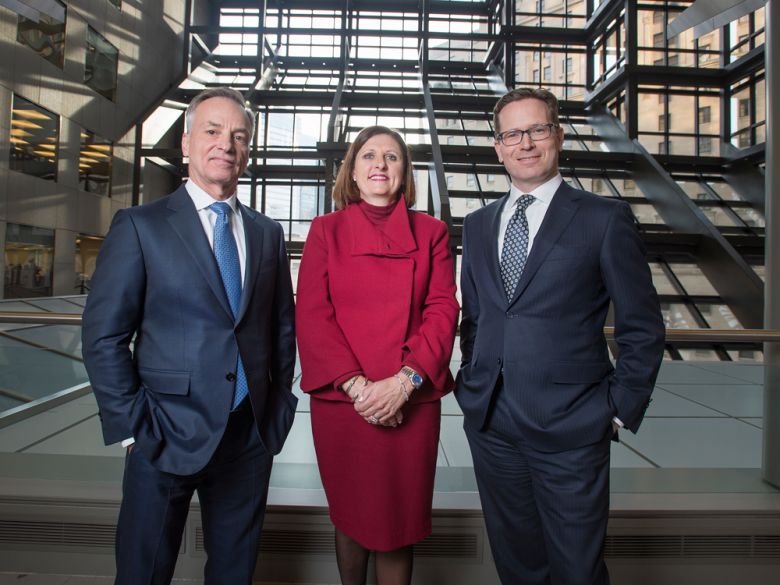 Canadian dealmaking rebounded in 2019, but the massive piles of money amassed by private-equity firms and pension funds are beginning to cast a long shadow on public markets and share sales.

Approximately $402.1 billion in debt and equity was sold by Canadian issuers last year, up 12 per cent from $358.9 billion in 2018, but down from a record $404.6 billion in 2017, according to Financial Post Data. The data includes all the financing Bay Street did on behalf of Canadian-incorporated issuers via equity, corporate debt and government debt offerings.

“The amount of capital that remains available to be deployed, whether it be in private markets, in debt markets or in public equity markets remains vast,” Trevor Gardner, head of Canadian investment banking at RBC Capital Markets, said.

But 2019 was, perhaps, a “tale of two worlds, so to speak,” according to Michael Bowick, the president of RBC Capital Markets. Debt sales were booming, but share sales were lower than the previous year.

The slower year in equity could be at least partly attributed to low interest rates and the abundance of private capital, both of which can help provide attractive alternatives to selling shares.

Private capital had been “if not crowding out … certainly supplanting the activity you see in the public markets — primarily equity, not really debt,” according to Roman Dubczak, head of global investment banking for CIBC Capital Markets.

“And that continued at pace,” Dubczak said.

In other words, even in what was a bounce-back year for Canadian dealmaking — and, overall, 2019 was pretty good by historical standards — the influence of private capital was felt.

Bay Street is well aware of the private-capital phenomenon. After all, Canadian dealmakers have long remarked on the vast sums of “dry powder” that private-equity firms and pension funds have been stockpiling.

What is becoming more apparent, though, is that issuers are noticing (or are being advised) these private war-chests exist.

“The rates at which they’re willing to buy assets in some cases seem to carry the day versus where companies would choose to issue equity,” Gardner said. “And so they’re viewing that as a substitute.”

Overall, RBC Capital Markets was once again the top financier in 2019, the Financial Post Data’s methodology shows, as the firm acted as bookrunner on 248 deals totalling $61.6 billion in debt and equity.

In second place was TD Securities Inc., with $46.9 billion and 180 deals, beating out BMO Capital Markets which also worked on 180 deals but raised $41.7 billion. Fourth-placed CIBC World Markets Inc. was busier, but its 182 deals raised $40.5 billion.

Claiming the fifth spot was National Bank Financial Inc., with 150 deals raising $38.3 billion, followed by Scotia Capital Inc. at 132 deals for $31 billion. The first non-Canadian firm on the FP Data’s list was Bank of America Merrill Lynch, which clocked in at seventh with 45 deals involving $12.8 billion.

Yet 2019 was the third consecutive year that overall equity sales declined. That’s because big equity years are typically marked by plenty of share sales out of the energy sector or big equity-backed acquisitions, two trends that were largely absent in 2019, noted RBC’s Gardner.

Interest rates also remained low and there was private capital aplenty. In such conditions, companies can opt to issue debt or sell assets over issuing shares, and there are plenty of private players prepared to scoop up businesses.

Some auctions for assets have even seen private-capital sponsors beat out strategic buyers that were in the same business as the asset up for auction, according to Jake Lawrence, the co-group head of global banking and markets at Bank of Nova Scotia.

“Which is interesting because strategics should have an embedded advantage given they’ve got greater synergy opportunities,” Lawrence said. “But the amount of capital that’s gone private has really given these sponsors a desire to get that capital to work.”

Public equity issuance was down but mergers and acquisitions activity was “very, very robust,” driven in part by private-capital sponsors and the relatively low cost of capital in the debt markets, according to Dubczak.

Indeed, last year saw some big debt raises by corporate and government issuers. The biggest of which, as per usual, flowed from Canada’s suddenly resurgent housing market, with Canada Housing Trust having five issues of more than $5 billion in mortgage bonds.

The biggest corporate debt deal of 2019 came from Bausch Health Co. Inc. (formerly known as Valeant Pharmaceuticals International Inc.), which on Dec. 30 completed an offering of nearly $3.3 billion in notes. Next closest was Bank of Montreal’s $3-billion issue in March.

Markets slumped to end 2018 over apparent concerns around trade tensions and the direction interest rates were heading. This likely created some pent-up demand and delayed issuers from going to the markets, according to Bowick.

“So 2019 started off with a bang,” he said, with the U.S. Federal Reserve signalling it would ease monetary policy. “That really then spurred investor demand for new issue paper, and of course, the corporates, governments, financials were also in the mode to issue.”

Although pipeline provider Enbridge Inc. pulled off one of the biggest debt sales in 2019, with a $2.64-billion issue in November, oil and gas-related dealings were missing from the list of the biggest equity deals.

“I would say that 2019 was a below-average year from an issuance perspective, again, largely driven by the lack of energy issuance,” said Sante Corona, the head of equity capital markets at TD Securities. The energy sector, according to TD, was only 10 per cent of the total, compared to 40 to 50 per cent a few years ago.

There were some promising pockets of activity. Corona said the real estate investment trusts had a particularly active 2019, driven by investors hunting for decent returns amid the low interest rate environment. Consolidation in the mining sector, a traditional source of strength in Canada, stoked M&A activity last year as well.

Tim Hortons owner Restaurant Brands International Inc. had the biggest equity issues in 2019, according to FP Data, with two share sales closing in August and September that raised approximately $4 billion. Getting in on the action as well was Canadian tech darling Shopify Inc., which in September completed an issue of about $919.1 million in shares.

Sprinkled among the FP Data’s top-10 equity deals of 2019 were the initial public offerings of three special purpose acquisition companies, all of which were spearheaded by Canaccord Genuity Corp. In July, for example, Subversive Capital Acquisition Corp. closed an IPO valued at more than $750 million.

However, when relying on FP Data’s methodology, the top financier of IPOs last year was BMO Capital Markets, which was in on the $276-million offering by retail-software provider Lightspeed POS Inc. and the $188-million IPO of licensed cannabis producer Sundial Growers Inc.

Initial public offerings were down 42 per cent on a dollar basis when compared to 2018, raising almost $986 million. Waste management company GFL Environmental Inc. scrapped its potential $1.5-billion initial public offering, after institutional investors pressed the firm to price its shares below the marketed range.

Among the other factors weighing on overall equity financing was the cannabis sector screeching to a halt amid concerns about unprofitability and government roll-outs, although the Sundial IPO was still the second-largest of the year.

“Despite a lot of geopolitical risk and turmoil, and predictions and prognostications of potential recession and slowdown in global growth, the markets were very resilient,” said Emmanuel Pressman, the chair of Osler’s corporate practice. “And those very strong market conditions and that market resilience was very helpful in terms of facilitating dealmaking and transactional activity.”

For 2020, there are high hopes for an equity comeback. In the energy sector, one of Canada’s biggest, there is already a feeling that sentiment has begun to shift.

“The level of activity there has just been so low that it’s hard not to imagine that it would increase,” said Bill Quinn, co-head of mergers and acquisitions at TD Securities. “I think some of the sentiment may be changing based on valuations and some of the things that are going on in the sector.”

Canadian energy companies have been working to control costs and demonstrate their credibility on environmental and sustainability issues.

As with the rest of equity sales, there are hopes of an IPO resurgence in 2020. When equity markets are trading well and valuations soar, this leads to “preconditions that incent owners of companies to perhaps list publicly,” noted Dubczak.

There was also a smoother end to 2019, compared to the slump that closed out 2018, which could put companies in a better position to go public or sell shares.

“Given dialogue that we’re having with shareholders and financial sponsors … we’d expect to see more IPOs in 2020 after a fairly disappointing year in 2019 in terms of issuance,” Corona said. Going forward, Corona said they also expect to see ongoing interest in defensive-yield stocks such as REITs.

On the M&A front, there is a similar level of activity expected, according to Quinn, the head of mergers and acquisitions at TD Securities.

“In some sectors, valuations here are attractive relative to the U.S., which gives people an incentive to invest here,” he said. “So I think we will see a reasonably active market, comparable to 2019.”

“And frankly, certain sectors have been depressed,” Scotiabank’s Lawrence said. “You may see more take-privates this year than we did in 2019.”

There is apparently still plenty of private capital out there with which to pull off such buyouts.

In September of 2019, one of the world’s biggest alternative asset managers said the days of investments such as private equity and real estate being considered as ‘alternative’ seemed to be coming to an end.

Given that interest rates around the world were either low or in negative territory, Brookfield Asset Management Inc. predicted institutional investors would probably be increasing their alternative investments.

Around US$6 trillion had already been allocated to private sources since 2009, the Toronto-based Brookfield noted, with the company estimating approximately US$25 trillion could flow to alternatives by 2030.

“To sum up the opportunity, alternatives are virtually the only place to earn a reasonable return for large allocators of capital,” said Bruce Flatt, Brookfield’s CEO. “Those institutions are therefore allocating significantly, and therefore the capital coming to managers of alternatives is increasing exponentially.”

Just weeks after its investor day, Brookfield announced the close of its latest flagship global private equity fund. Strong investor demand for the fund had pushed the total equity commitments to US$9 billion, well past the original fundraising target of US$7 billion.

It was a reminder: the piles of dry powder just keep getting bigger. Their shadows may get longer as well.

The U.S. Army Is Creating Artillery Rounds Guided By AI