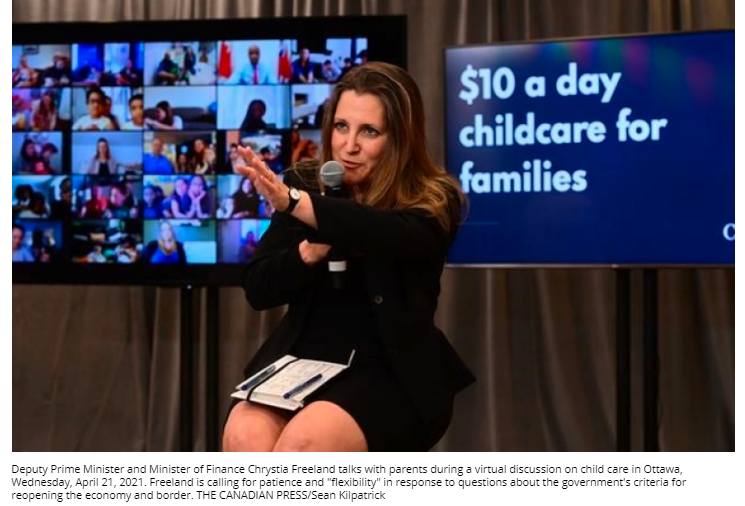 OTTAWA — Deputy Prime Minister Chrystia Freeland is urging Canadian companies to have patience as the federal government faces growing questions about its plan for reopening the economy and border.

The Canadian Chamber of Commerce hosted Freeland at a virtual event Wednesday to discuss Monday’s federal budget, but Freeland was pressed there on the government’s plans to end the border closure.

While he acknowledged specific dates are impossible at the moment, the business group’s president Perrin Beatty suggested the government could lay out the criteria it will use to determine when the border restrictions can start to be eased — or end entirely.https://www.facebook.com/v2.12/plugins/quote.php?app_id=157942011553470&channel=https%3A%2F%2Fstaticxx.facebook.com%2Fx%2Fconnect%2Fxd_arbiter%2F%3Fversion%3D46%23cb%3Df33cb6c873ef04%26domain%3Dwww.kamloopsthisweek.com%26origin%3Dhttps%253A%252F%252Fwww.kamloopsthisweek.com%252Ff2a0cb9ba697f9c%26relation%3Dparent.parent&container_width=824&href=https%3A%2F%2Fwww.kamloopsthisweek.com%2Ffreeland-urges-patience-as-business-looks-for-answers-on-reopening-border-economy-1.24310021&locale=en_US&sdk=joey

Freeland refused to provide any details, however, as she repeatedly underscored the unpredictable nature of COVID-19.

“One thing that I would remind us all about is this virus is, as one doctor has said to me, it’s very sneaky,” she told Beatty.

And while she acknowledged Canadian companies want — and need — predictability, she asked for patience and “flexibility.”

“What you all want, very understandably, is predictability and certainty and knowing when and how things will happen,” she said. “We need all of us to have just a little bit of flexibility, because we’re dealing with a threat which is flexible in how it attacks us.”

Public Safety Minister Bill Blair announced on Tuesday that Canada was extending restrictions on non-essential travel from the United States and overseas as a third wave of COVID-19 cases marked by variants from abroad sweeps across the country.

Restrictions were first imposed at the start of the pandemic last spring. The U.S. Department of Homeland Security tweeted Tuesday that it is “engaged in discussions with Canada and Mexico about easing restrictions as health conditions improve.”

Freeland also emphasized the importance of vaccines in moving past COVID-19 and reopening the border and economy, and asked Canadian business leaders to encourage vaccinations in their communities.

Beatty, meanwhile, revealed that Health Canada is currently in talks with his organization about using its business network to distribute rapid-test kits to companies across the country.

He indicated kits have already been distributed by chambers of commerce in some southern Ontario communities, and that the organization is pressing provincial governments to let non-medical staff administer the tests.

This report by The Canadian Press was first published Apr. 21, 2021.