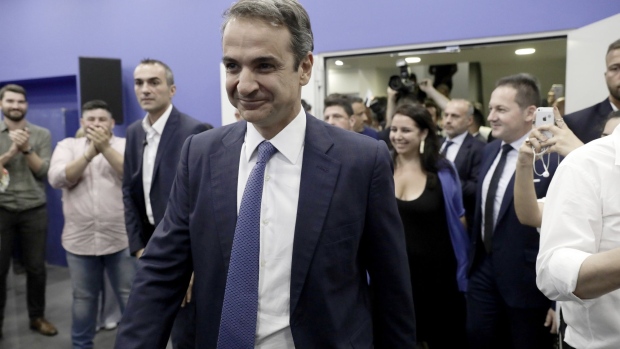 For a glimpse of what a Kyriakos Mitsotakis administration may look like, Greeks need only to look over their shoulders to five years ago.

As the country plumbed the depths of its financial crisis, Mitsotakis, then the administrative reform and e-governance minister, oversaw the firing of thousands of state employees on creditors’ demands. He then scrapped the right of civil servants to take six extra days off a year if they worked at computer screens for more than five hours a day, calling it an “anachronistic” privilege.

Now, as Greece’s new prime minister, the 51-year-old will need to show investors that the country’s first post-bailout government can take more bold measures to structurally overhaul the economy and rid it of corruption, red tape and tax dodging. He’ll also need to convince crisis-weary Greeks that he can lead the country into better times — all while facing many of the same constraints from creditors as his predecessor, Alexis Tsipras.

“If Mitsotakis does some of the things he has said will be done in the next 12 months, we will be on the right path,” said Andrew Liveris, chairman of the Hellenic Initiative. The group founded in 2012 mostly by U.S.-based Greeks to help shape the country’s recovery, counts Former President Bill Clinton among its executive committee members.

Mitsotakis, a Harvard and Stanford-educated former banker, who worked at Chase Bank and McKinsey and Co. in London before getting into politics, has promised lower taxes and incentives for investments. He has pledged to unblock projects valued at about 11 billion euros ($12.3 billion) entangled for years in red tape, saying luring investments is critical to reviving an economy that shrank by a quarter during Greece’s decade-long crisis.

Mitsotakis inherited an economy on the mend and a stock market that’s soaring — the Athens Stock Exchange General Index has advanced more than 42% this year, making it the world’s top performer. Still, they are rebounding from shrunken bases.

Before investors dive in further, they will want to see if he follows through on promises and if the measures actually stick, George P. Stamas, the president of the Hellenic Initiative, said in an interview in Athens. “They will wait to see during the first 100 days what the legislative actions will be and whether Greeks will take to the streets again,” he said.

Mitsotakis is off to a good start. On Friday, he got a vote of confidence from German Chancellor Angela Merkel, who said his program has “good chances” of generating more growth for Greece.

The scion of one of Greece’s most political families — his father was a prime minister, his older sister Dora Bakoyannis served as foreign minister while his nephew Costas Bakoyannis is the Athens Mayor-elect — Mitsotakis is a man in a hurry. Just days after he was sworn in on July 8, he announced that parliament won’t break for the summer since there’s too much work to be done.

“I want Mitsotakis to deliver on the modernization of the public sector, growth, new jobs and better wages,” said Theodora Galanou, a 35-year-old paint-shop owner in Athens. “That said, what I’m mostly asking for from him is to give people more optimism. That’s what’s missing for the middle class. We’re living in a constant gloom. This has to change. Given his first steps in office, for example with his new cabinet, I believe he can do it.”

Among his top priorities, Mitsotakis has said, will be to revive stalled projects, starting with Hellinikon. The flagship investment envisages the transformation of a former airport site on the Athens riviera — more than two times the size of New York’s Central Park — into a metropolitan park including luxury hotels, casino, marinas and apartments.

Mired in red tape, the project’s investors — a venture led by Greece’s Lamda Development SA and including China’s Fosun International Ltd. and Eagle Hills Properties LLC from Abu Dhabi — have been stuck for about five years. Its progress is being watched closely for how serious Mitsotakis is about luring investments.

In an interview in October 2018, Mitsotakis himself noted its significance, saying, “one way or another, Hellinikon must get off the ground in 2019. This project must not be delayed, not even for a minute longer. Hellinikon is the most emblematic of the big investments in the country. ” On Saturday, he said Hellinikon will be “a symbol of the new Greece.”

Not surprisingly, the first meeting by Adonis Georgiades, the new economy and investments minister, was with representatives of Hellinikon’s investors. The project, valued at 8 billion euros, is expected to generate more than 75,000 jobs.

“It’s a system of personalities who are engaged in ‘me first’,” said Stamas, for whom corruption runs at all levels in Greece. “Changing the tax system can drive changes for the other sins as well.”

Mitsotakis wants to immediately legislate some ambitious tax cuts that he hopes will boost investment and relieve austerity-weary Greeks. A raft of cuts in levies is planned, including a corporate tax rate of 20% by 2021 from 28% now. Levies on dividends will be slashed by half in 2020, while the capital gains tax on property and sales tax for construction will be suspended for three years.

The government has promised to stick to its commitment to deliver primary surpluses of 3.5% of gross domestic product for this year and 2020. It’s in talks with creditors since the tax measures could slash its receipts and may affect Greece’s pledge to do that until 2022.

Mitsotakis is banking on the tax cuts to spur investments and growth. Greece’s foreign direct investment was 3.6 billion euros in 2018, the most since 2006. If taxes are cut, “there will be a flood” of investments that could increase that number by 50% or even 100%, Stamas forecast. Investments could target high-end tourism, renewable energy and agricultural products like wine and olive oil.

Greece’s economy expanded 1.9% in 2018 and is on track for about 2% growth this year. Mitsotakis’s target is for 4% growth in 2020. That may be a tall order, said Wolfango Piccoli, co-president of London-based consultancy Teneo Intelligence.

“To reach such a level of growth, Greece needs to attract a volume of foreign direct investment that’s at least double the current 4 billion euros per year,” he said.

Mitsotakis has his work cut out for him.