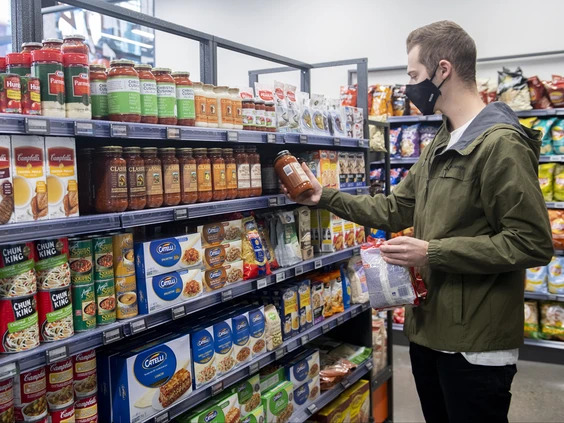 As the economic fallout continues from Russia’s war on Ukraine, Canadians will face higher grocery bills. PHOTO BY GRAHAM HUGHES/BLOOMBERG

The conflict between Russia and Ukraine has disrupted grain exports from the Black Sea region, putting stark upward pressures on wheat, corn, sunflower seeds, and legumes like pulses

As the economic fallout continues from Russia’s war on Ukraine, Canadians are facing higher grocery bills as the cost of grain spikes further upwards.

In his commentary for Dalhousie University’s Agri-Food Analytics Lab, senior research director Sylvain Charlebois noted that Ukraine is that ninth-largest wheat producer in the world, and the fifth-largest corn producer accounting for 13 per cent of global corn exports.

“Agricultural activity represents about 70 per cent of the country’s land, and about 25 per cent of the world’s reserves of black soil is in Ukraine,” the commentary reads.

Russia and Ukraine are also among the top five producers for pulses and other legumes, amounting to a combined US$263.8 million in trade value.

Charlebois said in an interview that the first factor impacting grocery prices is the rising cost of fuel; the Brent benchmark rose 21 per cent to close at US$118.11 a barrel on Friday, a level not seen since 2013.

Reuters reported that the price of gasoline in the United States hit its highest level since 2008 on Sunday at US$4.009 on average for a gallon, according to AAA, an automobile association. This amounts to a US40-cent hike from a week ago and has drivers paying 57 cents more than a month ago.

In Canada, pump prices averaged 171.6 cents per litre on Saturday, up from 152.4 cents a month ago, according to the CAA.

Charlebois added that there are other knock-on effects that would hit consumer’s food bills beyond wheat and legume products.

Charlebois added that the rising costs of feeding cows and other livestock will hike the prices at meat counters and among dairy products, which have already seen big price boosts since the Canadian Dairy Commission increased prices.

Another factor sure to boost food prices is the surging costs of fertilizer necessary to boost yields, also driven higher by the Russia-Ukraine conflict. Charlebois said that some private contracts for fertilizer jumped up in price seemingly overnight, having heard from others in the industry who were paying $200 a ton for fertilizers in some cases.

Last year, the story about high commodities prices was centered around droughts and other weather events that put a strain on yield. Charlebois said that it is too soon to tell if drought will be yet another issue later on in the year keeping prices flying high, but he said he would be keeping his eye on the looming Canadian Pacific Railway Ltd. strike as another disruptor for fertilizer supplies.

The labour dispute comes as 3,000 CP workers have voted for a plan to strike on March 16 if their union demands are not met. Charlebois said this could be disastrous for the global fertilizer market since Canada is the other fertilizer hub.

“Everything is up, and when everything is up, basically, you see food prices go up significantly,” Charlebois said. “That’s what happened I’d say about 15 years ago, and it’s happening again. But this time around, we actually have a war.”