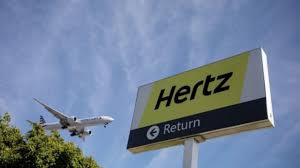 Hertz said Wednesday it has put its plans to sell $500 million worth of stock on hold because the offering is being reviewed by the Securities and Exchange Commission.

Trading in shares of the car rental company, which filed for bankruptcy protection last month, were halted before the announcement. The stock later resumed trading.

Hertz Global Holdings Inc., which is based in Estero, Florida, said Monday that it received approval from bankruptcy court to proceed with the stock sale. The sale would be an unusual move for a company in the throes of a bankruptcy reorganization and a very risky proposition for investors.

The company warned that investors who buy its shares face “substantial risks” that the stock they bought might be rendered worthless.

The company has become a popular name to trade among tens of thousands of new traders, a wave of whom have started investing the stock market during the current pandemic by using an app called Robinhood which allows stock trading with no commissions.

Los Angeles delivery driver Bryan Quevedo is among them. When the 22-year-old received his U.S. government stimulus check last month, he invested $1,000 into Hertz. A marketing graduate who has struggled to find an office job amid the COVID-19 pandemic, Quevedo analyzed Hertz’s share price movements to predict that the stock had hit bottom. After four days, he had doubled his investment.

“I’m just waiting for the price to go higher or break even so I don’t lose any capital,” said Quevedo, who has since invested another $450 in Hertz’ stock.

A few investors say they will hold onto their Hertz stock for the long erm, despite the risk of being wiped out as equity investors normally are when companies go bankrupt. Sherrie Hardy, a 33-year-old airport security worker in Muskegon, Michigan, said she used her and her fiancée’s stimulus checks to invest in Hertz and have no plans to sell.

“I invested not only in a sense of capitalizing, but actually want to be a supporter of Hertz. I’ve always had good business with them and their community efforts. So it’s something that I would like to see to stay around for the years to come,” Hardy said.

“We all know, when we get into the stock market, it is a gamble of some sort.”

Hertz’s move to sell new shares was an attempt to capitalize on the stock’s sudden popularity, but the SEC has put an end to it.