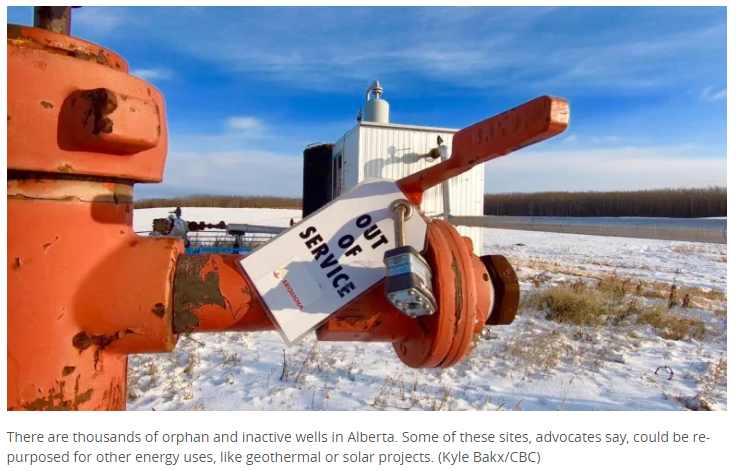 There are tens of thousands of dormant oil and gas wells sitting idle across Alberta — an inventory the province wants to shrink in the coming months with the help of $1 billion from the federal government.

But as Alberta implements its strategy for cleaning up orphan and inactive wells this week, there are calls for the provincial government to also look at using some of the funds to provide new opportunities for some sites.

Advocates say infrastructure like wellbores, roads and pad space that could find other energy uses, including geothermal, micro-solar, hydrogen, recovery of lithium, or carbon capture and storage.

“There’s a broader opportunity that could also be leveraged at the same time — that’s something that we really don’t want to miss,” said Marla Orenstein, director of the natural resources centre at the Canada West Foundation.

“There’s a subset of those sites, a rather large subset, that are really good candidates for … other energy purposes.”

Alberta has nearly 3,000 orphan wells, oil and gas wells that haven’t been remediated by their often-bankrupt owners. There are more than 90,000 inactive wells, which remain in corporate hands but sit idle for economic reasons.

This month, Ottawa announced it would provide Alberta with $1 billion to help clean up those sites, including a $200-million loan to the Orphan Well Association, an industry-funded group that cleans up orphaned infrastructure.

The provincial government has since announced oilfield services firms will be able to apply through an online portal starting Friday for grants under the oilfield rehabilitation program.

Orenstein said the money — and the jobs the work will create — is a good start. But she says there’s also an opportunity to innovate and do more with some, not all, of the sites.

“If we can figure out how to direct that money toward not just reclaiming but also re-purposing, we’ll provide a real advantage to the province and the country,” she said.

Nothing in the plans that the province has announced so far includes funds for re-purposing sites. The focus has been on cleaning up the sites and, in doing so, putting thousands of people back to work quickly.

Tristan Goodman, president of the Explorers and Producers Association of Canada, agrees with the focus, saying the vast majority of the funds should go to the clean-up work that was at the core of Ottawa’s announcement.

But Goodman agreed there is potential in re-purposing older wells for geothermal in some circumstances, adding he wouldn’t object if a small amount of funding was used to do more work in that area.

“There has been work done in the past in Alberta that has found there is limited opportunity for that — not in a negative way — but they found there definitely is opportunity,” he said.

“But it’s not as simple as every well will be a geothermal candidate.”

Supporters of re-purposing dormant wells certainly believe it’s worth investing some of the funding to exploring a variety of options for the old well sites.

One of the easiest examples is how an old site could be used for solar projects, Rohl said, as it may already have the road access, the lease, a gravelled site and the nearby power lines to tie into.

But there are challenges.

Rohl said one of the big ones has been questions of liability at these old sites.

“That’s always been sort of a legal challenge to all of this,” said Rohl, who works for the Energy Futures Lab.

“These startups that are doing new technology, which could be the ones that are re-purposing it, don’t have the ability to take on huge amounts of liability right off the get go. And the operators, who are holding this liability, want to get it off their books.

“So sorting out who has the liability and how that’s handled in the future is the biggest question and the biggest challenge for this, because you’d want to be able to do it responsibly.”

However, she said the new federal funding could maybe help with improving the old sites to the point where the majority of the liability is resolved.

Orenstein said there also regulatory changes that would be required, like altering rules that say industrial sites have to be returned to their original conditions before they can be re-purposed for new energy uses.

But if the government wants to make things happen, Rohl said there are companies ready to go.

“It’s not as though we need to wait for the technology to catch up — we just need the framework for collaboration.”

The idea re-purposing old wells isn’t the only example of how traditional energy skill, resources and infrastructure are being reexamined for use in new ways.

On Thursday, the Canadian Association of Oilwell Drilling Contractors (CAODC) and the Petroleum Services Association of Canada joined with geothermal developers in forming a new partnership.

The goal of the alliance is to promote Canadian geothermal development and create jobs for displaced oil and gas drilling contractors and oilfield service workers.

“Drilling for deep geothermal resources requires advanced drilling technology and expertise and can put drilling rigs and associated services to work in this current economic slowdown,” the Geothermal Collaboration Network said in a release.

“Each active drilling rig can create 175 direct and indirect jobs, putting hard-working Canadians back to work on renewable energy.