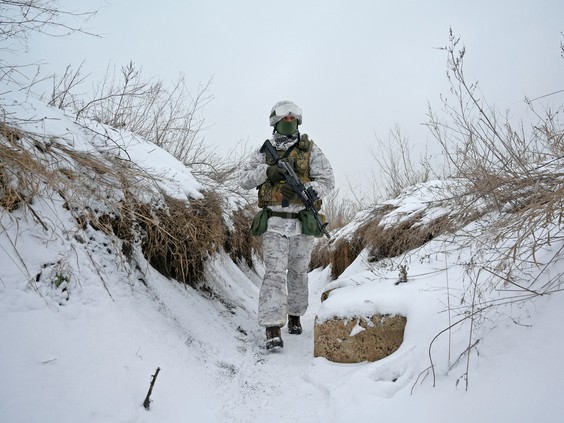 A service member of the Ukrainian armed forces walks at combat positions near the line of separation from Russian-backed rebels outside the town of Avdiivka in Donetsk Region, Ukraine January 25, 2022. PHOTO BY MAKSIM LEVIN/REUTERS

Martin Pelletier: We’re running nearly half of our portfolios in U.S.-dollar-denominated assets

On the first, countries such as Russia have been strategically taking advantage of our ignorance in energy security to obtain leverage and gain tremendous power. Take the ongoing situation in the Ukraine.

Many parts of Europe’s power grid are so unreliable due to the shutdown of nuclear power and the all-or-nothing shift to renewables that they’ve had to increase their natural gas needs to meet rising domestic power demand. Meanwhile, European countries such as Austria, Finland and Lithuania have become solely reliant on the Russians for all of their natural gas supply.

As a result, how do you think the European Union will deal with the Russians should they actually invade Ukraine when their natural gas supply taps are directly controlled from Moscow?

It’s concerning that it appears some of these same environmentalist ideologues are within the Justin Trudeau and Joe Biden administrations and advising them on energy policy.

Foreign nations invading others and the rising cost of living are nowhere near the threat we face from climate change. Perhaps these events are even caused by it, which is the type of thinking we’re dealing with here. Fast-forward a decade and do you think they will care if eastern Canada’s energy needs end up being completely controlled by countries such as Saudi Arabia?

The Biden administration is also deploying the same phasing-out approach to its domestic supply through various tactics such as preventing pipeline access to Canada’s supposedly world-destroying oilsands.

The Organization of the Petroleum Exporting Countries and Saudi Arabia couldn’t be happier to come to the rescue by flooding American and Canadian coastal ports with their supertankers filled with so-called ESG-compliant crude oil.

The second problem with the western world’s Build Back Better strategy is that it has until recently been funded by central bank money printing that is about to come to an end.

Rather than reduce the pace of spending, governments such as Trudeau’s continue to go all in on their agendas, making them incredibly susceptible to rapidly rising debt-servicing costs.

For some perspective, our debt situation is so bad that total credit as a percentage of gross domestic product is at a whopping 345 per cent, which puts us neck and neck with Greece.

This will only get worse as policy-makers in Ottawa continue to focus on phasing out the energy sector and replacing it with non-producing real estate speculation and government employment — two of our economy’s fastest-rising segments at the moment.

Not surprisingly, our currency has been delinking its historic relationship to crude oil, which has always been there to prevent devaluation and to act as a hedge against inflation.

But don’t worry, our leaders tell us, there is no inflation, no food shortages, no energy crisis, no interest-rate risks, etc. Give it time, though. Average Canadians will soon wake up to the realization that two-thirds of the annual $650 billion in Canada-United States trade is delivered by trucks.

Fortunately, investors can do a lot to protect themselves from this nonsense. For example, we’re running nearly half of our portfolios in U.S.-dollar-denominated assets.

Looking ahead, we see a serious risk to the Canadian dollar due to Trudeau’s policies, as well as a risk coming from the Bank of Canada refusing to acknowledge our housing affordability crisis. Only this time last year, central bank governor Tiff Macklem said, “So far, we are not seeing the kind of excessiveness in the housing market that would really get us worried.”

Moreover, a very dangerous situation for the Canadian dollar arises should the U.S. Federal Reserve hike rates and the Bank of Canada doesn’t match it, which is becoming that much more of a reality given their respective rate decisions earlier this week.

The average U.S. household is nowhere as levered as Canadian ones and Trudeau is still spending as if there is no economic recovery while internal pressures within the Democrat party are restricting Biden’s pace of spending.

Beyond owning more U.S. dollars, why not dip your toes into the Canadian oil and gas sector, which is generating record amounts of cash and getting paid in U.S. dollars while its costs are in Canadian dollars.

Canadian policy makers and environmental lobbyists are trying to limit future growth from this sector, but it may not matter as it is simply motivating these companies to reallocate their tremendous cash flow to buy back stock, increase dividends and pay down debt at a record pace — all great things for shareholders.

In the end, while western governments such as our own are creating tremendous instability, it doesn’t mean we should sit idle and allow it to impact our portfolios.