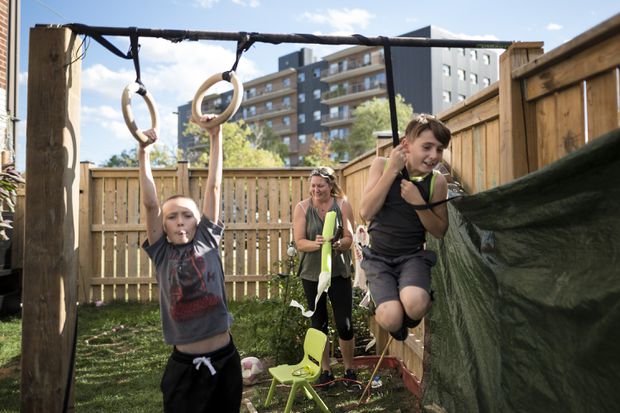 Like millions of Canadians, the case workers and support staff at the Children’s Aid Society of Toronto have been working from home since the coronavirus pandemic turned workplaces across the country into ghost towns.

Hundreds of CAS employees have worked away from the office since mid-March, with a flexible schedule part of a deal negotiated between the agency and its union that allows parents to juggle work and child-care responsibilities.

But, as schools in Ontario reopen, that deal has expired. Those CAS employees are now being presented with the stark and, for many, unwelcome choice of returning to the office and a regular work schedule, or of taking an unpaid leave of absence. The flexibility of the past six months? Gone, within days.

Parents across the country, and their employers, are confronting the same issue as elementary and high-school students return to the classroom and employees are asked – sometimes told – to return to the workplace.

Even with the rebound in the economy, 2.5 million Canadians were still working at home as of mid-August, about half of the peak levels of April and May, according to data from Statistics Canada released on Friday. For the parents among those millions of workers, the looming return to the workplace makes it even tougher to balance their careers and their kids. For businesses, the issue comes down to reconstituting the team dynamic that could prove crucial in navigating a turbulent economy.

The abrupt shift at the CAS has upset some of the agency’s workers who struggle to reconcile the demands of their employer with their fears for their children’s health and safety, and their need to keep on earning a living. For some, there are no good options, with the end of flexible work meaning that their children will be headed back to in-person classes, even though those parents are far from confident that schools are safe.

“My decision was made for me, really,” said one CAS worker, a single mother with a 10-year-old daughter. The Globe and Mail is not naming her or other CAS employees because they worry about repercussions at work if identified. She said she thought about taking a leave, but that would result in a steep drop in her income, even with the caregiver benefits that Ottawa recently introduced.

Another female CAS worker, with a daughter entering Grade 1, questions why she is no longer able to work flexible hours from home, given that she was able to carry out her duties for months with no complaints from her managers.

If able, she would have kept her daughter home to learn online. But even with her husband’s income, she felt compelled to return to work rather than take a leave, forced to choose between protecting her daughter and safeguarding her family’s financial stability. “It feels really horrible to pick between what I really want to do, and how to survive,” she said.

The CAS did not agree to an interview, and did not respond directly to a question about what drove its shift in policy. In a statement, the agency said that “as with many organizations,” it is requiring that employees take a leave if they choose to home-school their children full-time and cannot perform their duties.

Under labour law, employers do have the right to require that their employees return to the workplace, said Odessa O’Dell, an associate with the labour and employment group at Borden Ladner Gervais. An employee’s preference for working at home, or even a broad concern for the safety of schools is not enough to prevent an employer from exercising that right, she said.

But Ms. O’Dell noted that the rights of employers are not without limits: Employees with a demonstrable health concern, such as a condition that puts them at extra risk from the coronavirus, would have a solid case to press for accommodation.

Many employers have taken a collaborative approach with their employees while schools and daycares were shut down, she said, but that collaboration could grow strained in coming months as the need to reconstitute workplaces grows. “At some point, there has to be a line, otherwise the business just can’t continue,” she said.

Dan Kelly, president and CEO of the Canadian Federation of Small Business, echoed that notion, saying that many small businesses depend on the cohesion of a group working together. “Some of the magic can’t be duplicated through Zoom,” he said, adding that some companies have seen working from home degenerate into employees “taking a bit of a vacation.”

But he said employers are aware of the need to balance the needs of the business with the morale of employees. Conversely, he said, there could be a long-term deterioration in morale if employees continue to work in physical isolation.

Mr. Kelly noted that, for many of his members and their employees, working from home was never possible. A Statistics Canada study in late May concluded that about 40 per cent of workers have jobs that can plausibly be done from home. But that capacity varied widely by sector: 85.3 per cent of jobs in finance and insurance could be performed at home, but just 5.6 per cent of accommodation and food-services jobs fit that description.

Some businesses plan to continue the work-from-home approach for months to come, including Klick Health in Toronto, a pharmaceutical marketing company where Sharmila Sivasankaran works as vice-president of quality assurance.

Ms. Sivasankaran, the mother of two small children, says she’s happy that her company told employees Wednesday that it won’t be reopening its offices until at least January, allowing her to keep her four-year-old daughter and nine-year-old son at home. “Parents, people first versus being back in the office,” is how she describes her employer’s attitude.

For others, however, harder choices await. Chantalle Menard, who works as an accountant for a Toronto-area company, is struggling to figure out how to comply with her employer’s requirement that she return to head office after months of working from home. That requirement was described as a request, but it didn’t feel that way, she says. “You get asked, but it’s not really asking.”

She’s not convinced that schools are safe for her three children, ages 15, 11 and eight. As a single parent, she’s not able to take an unpaid absence or make do with government emergency benefits. Adding to the stress: She suffers from two autoimmune diseases that she believes puts her at elevated risk to the coronavirus.

So far, her best solution is hiring a babysitter to supervise her kids’ online learning while she’s at work, at the hefty cost of $350 a week. For Ms. Menard, 40, being asked to navigate between her family’s health and financial survival has been gruelling. “I’ve beat myself up, left, right and centre.”

2 TSX Stocks That Could Benefit From a Gold Rally

Canada urged to keep up with US tax cut plans