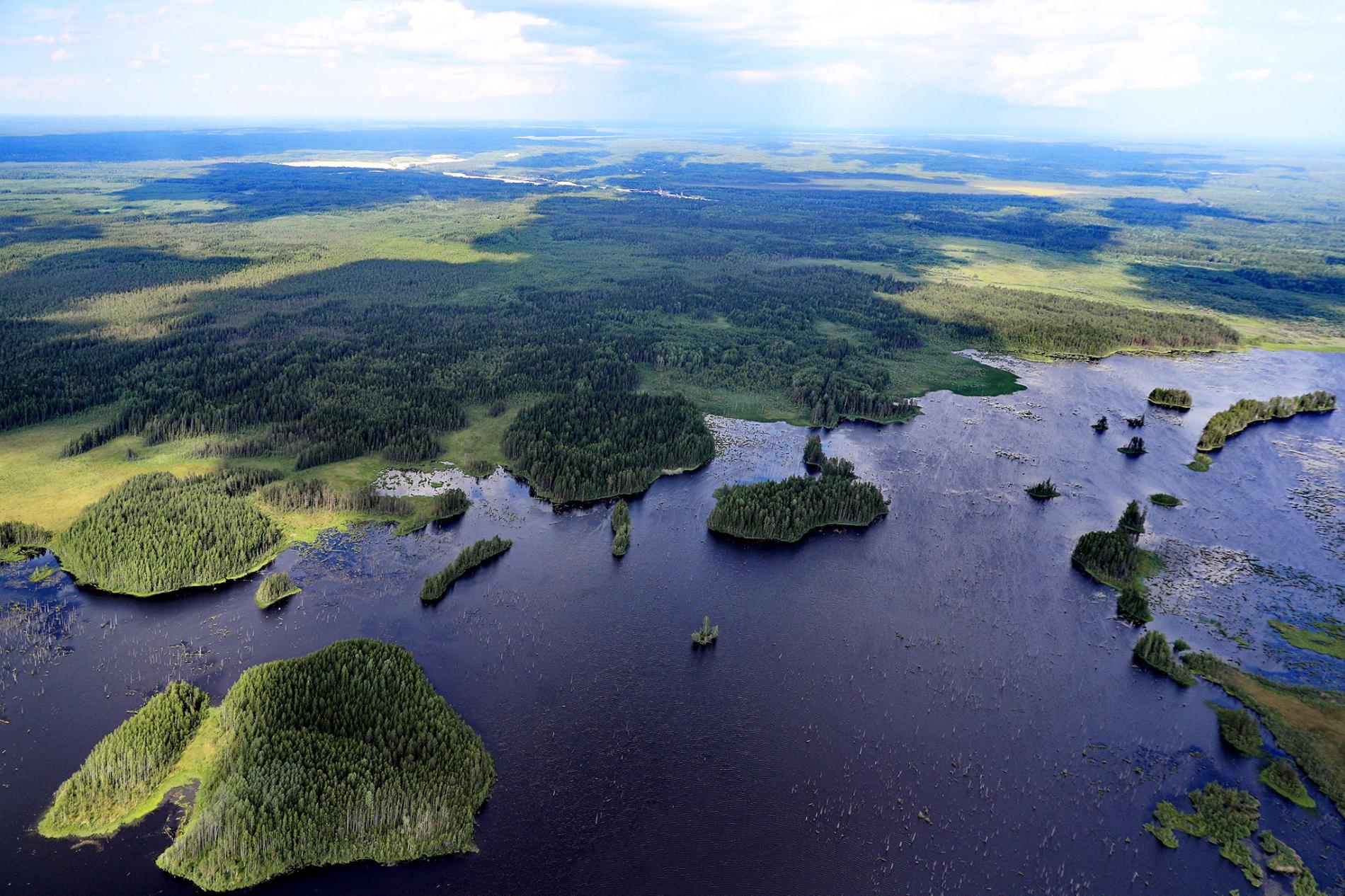 Increasing the Earth’s forests by an area the size of the United States would cut atmospheric carbon dioxide 25 percent.

An area the size of the United States could be restored as forests with the potential of erasing nearly 100 years of carbon emissions, according to the first ever study to determine how many trees the Earth could support.

Published today in Science, “The global tree restoration potential” report found that there is enough suitable land to increase the world’s forest cover by one-third without affecting existing cities or agriculture. However, the amount of suitable land area diminishes as global temperatures rise. Even if global warming is limited to 1.5 degrees Celsius, the area available for forest restoration could be reduced by a fifth by 2050 because it would be too warm for some tropical forests.

“Our study shows clearly that forest restoration is the best climate change solution available today,” said Tom Crowther, a researcher at ETH Zürich, and senior author of the study.

That does not alter the vital importance of protecting existing forests and phasing out fossil fuels since new forests would take decades to mature, Crowther said in a statement.

“If we act now, this could cut carbon dioxide in the atmosphere by up to 25 percent, to levels last seen almost a century ago,” he says.

It could take more than a hundred years to add enough mature forest to get sufficient levels of carbon reduction. Meanwhile 40 billion tons of carbon dioxide (CO2) from burning fossil fuels are being added to the atmosphere every year, said Glen Peters, research director at Norway’s Center for International Climate Research.

Click here to watch video: Iceland Is Growing New Forests for the First Time in 1,000 Years

“The only way we can keep below 1.5C or 2C, is to stop emitting fossil fuels,” Peters says in an email.

That means no new fossil fuel-using infrastructure can be built, and some existing power plants need to shut down early, based on a major study published in Nature on July 1.

That said, large-scale CO2 removal through reforestation will help offset emissions from sectors like aviation where alternatives are not yet available, and perhaps help lower temperatures, he said.

Trees—all plants, in fact—use the energy of sunlight, and through the process of photosynthesis they take carbon dioxide (CO2) from the air and water from the ground. In the process of converting it into wood they release oxygen into the air. In addition to the CO2 that trees capture, they also help soil capture significant amounts of carbon.

Researchers studied nearly 80,000 high-resolution satellite photographs of protected forest areas across a range of ecosystems to determine the natural level of tree cover in each. That was combined with the mapping software of Google Earth Engine to generate a predictive model to map potential tree cover worldwide.

It turns out that more than half the potential to restore trees can be found in just six countries: Russia (151 million hectares); USA (103 million); Canada (78 million); Australia (58 million); Brazil (50 million); and China (40 million). Those countries have so much potential because they’ve already removed much of their existing forests, said lead author Jean-Francois Bastin of ETH Zürich.

“Anyone can plant a tree and we can start doing it tomorrow. Reforestation can buy us time to cut our carbon emissions,” says Bastin.

While tree plantations can also store carbon, they don’t support much wildlife such as pollinators, whose decline is very worrying, he said.

“In my opinion the implications of our study are that we need to respect forests as humanity’s best ally to protect the climate and our life support system,” he says.

Having suitable land area to grow forests is just one factor. Forests are far more important than their ability to soak up carbon. Tropical forests, for example, are where 90 percent of all terrestrial species are found, said Robin Chazdon, an ecologist at the University of Connecticut.

Climate change isn’t humanity’s only global environmental challenge. Earlier this year a landmark UN global assessmentwarned that one million species are at risk of extinction, threatening the very foundations of our economies, livelihoods, food security, health, and quality of life.

It takes a long time to make a new forest so there has to be a wide range of benefits for local people and society at large beyond just capturing carbon, said Chazdon. Along with 11 other experts, she used high-resolution satellite imagery and the latest peer-reviewed research to rank regions that provided the best carbon, water, wildlife, and other benefits and were the least costly and risky to reforest.

In total they identified more than 100 million hectares of lost lowland tropical rain forests spread out across Central and South America, Africa, and Southeast Asia. Their findings appeared July 3 in the journal Science Advances.

The top forest restoration hotspots are all in Africa: Rwanda, Uganda, Burundi, Togo, South Sudan, and Madagascar. Reforesting some of the marginal cropland and pasture lands that were identified brings great opportunities to protect a diversity of species at low cost and low risk, while bringing a range of benefits to local people with enough financial support, Chazdon explained.

Forest restoration can take many forms—from enriching pastures with trees, to growing coffee or cocoa beneath a forest canopy, to adding forest buffers for national parks and protected areas to enhance tourism.

“Many locals want these kinds of things to happen but they have to be involved and supportive or it won’t work,” Chazdon says.

Indigenous Peoples and local communities hold at least half of the world’s land, including most tropical forests. Deforestation rates are far lower in forests where indigenous land tenure is recognized.

“We have served as guardians of these lands for generations… . We also understand how to restore them to health,” says Joan Carling, a member of the Kankanaey tribe in the Philippines and Co-convener of the Indigenous Peoples Major Group for Sustainable Development.

“With the security of our lands and resources, we can prevent destructive logging, mining, agri-business, and other projects from occurring in our territories,” says Carling via email.

That security is under threat in many regions, most recently in Brazil. According to recent reports deforestation in the Amazon rainforest is accelerating under the new Brazilian government. Satellite images reveal that the area of forest being cleared is equivalent to losing a football field-sized amount every minute. In June, forest loss was 88 percent higher than a year ago.

A number of international efforts have been launched to secure existing forests and plant many more, including the Bonn Challenge, where 59 countries have agreed to restore 150 million hectares of forest by 2020 and 350 million hectares by 2030.

Under the New York Declaration on Forests, countries have pledged to halve the rate of deforestation by 2020, to end it by 2030, and to restore hundreds of millions of acres of degraded land. And the Trillion Tree Campaign is mobilizing school children and communities around the world who have already planted 13.6 billion trees since 2007, when a 9-year-old Felix Finkbeiner of Germany launched the idea.

“If we don’t make fundamental changes, conditions for humanity will only get worse,” said Chazdon. “Reforestation can solve a lot of problems.”