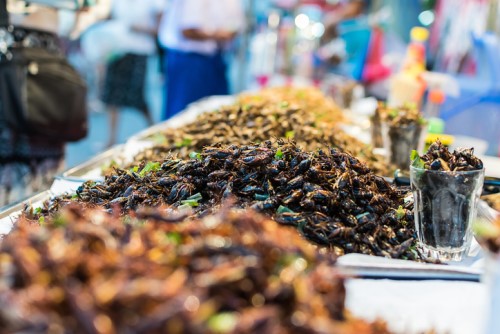 The insect farming sector is in its pupal stage, taking its time before blossoming into a thriving alternative for traditional protein sources.

Even at this nascent stage, private firms see huge potential in the business, and many investment institutions are ready to supply insect farms with funds to help them grow.

Enter Enterra Feed, a British Columbia-based insect farm that has captured the attention of some of the biggest names, including US agricultural giant Cargill, Wilbur-Ellis and Sweden-based Buhler Group.

Enterra will be expanding to a second commercial-scale plant in Calgary next year and targets to expand in other North American cities every year for the next five years with the support of venture capital firm Avrio Capital and Wheat Sheaf Investments.

According to a report from Reuters, global food producers are now looking for alternative yet cost-effective and sustainable ways to meet the increasing demand for protein. Cargill strategy and technology head Benoit Anquetil said the development of insects as a new source of protein is a long-term opportunity for the food business.

“Sustainable protein is a key challenge, which is why Cargill is evaluating the viability of insects as part of the solution to nourish the world,” he said.

Meanwhile, mealworms are seen to have the ability to consume and get nutrients from grains not fit for livestock production without transmitting harmful toxins to their consumer.

Just recently, another insect farm, this time Ontario-based Entomo Farms, made the headlines after it raised an undisclosed amount in Series A funding from Maple Leaf Foods.

Entomo sells cricket and mealworm powders and whole roasted insects. The firm has already grown to 60,000 square feet and has clinched dozens of clients in the food industry.

Other firms which have plans to expand this year include Protix, which has a commercial black soldier fly larvae farm in the Netherlands. It is planning to build its second facility later this year with the help of a US$50m investment from Bühler

Meanwhile, Ohio-based EnviroFlight, another black soldier fly larvae producer, will begin the construction of a facility near Cincinnati in the US later this year.

As this industry continues to grow, food regulators will be closely monitoring to still protect the interest of consumers.

Thomas Gremillion, director for the Food Policy Institute at the Consumer Federation of America, said safety testing of insects as feed will be crucial to gain consumer acceptance.

“If there was a big change in how animals are being fed, I’d want to see some extra scrutiny of whether the animals were accumulating any kinds of toxins from the insects,” he said.

“If we’re replacing 5 or 10% of the proteins that are normally in those feeds with insect protein, that’s a lot of resources saved,” he said.

How Bitcoin is revolutionizing the investment space