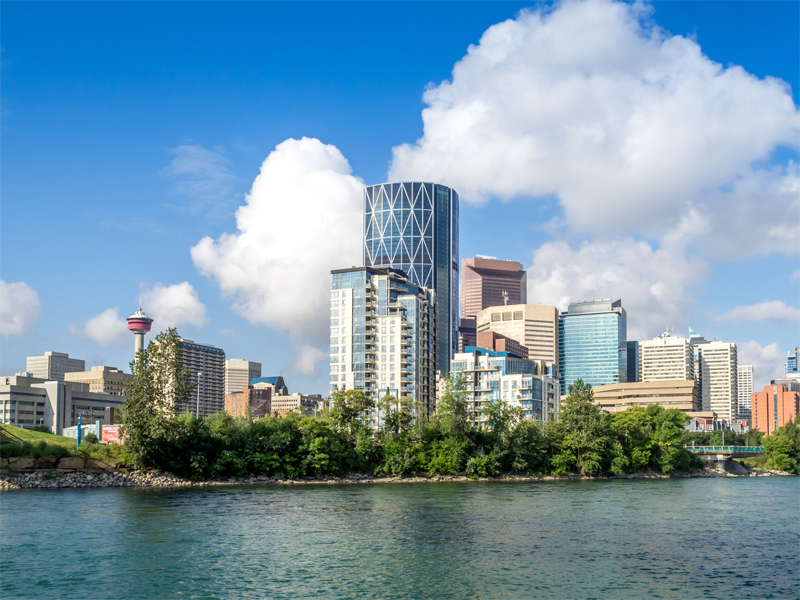 Real estate securities tend to march to their own market beat, as they did in 2018 when they bucked the prevailing downward trend in the Canadian stock market. While the S&P/TSX Composite Index fell almost 9% on the year, the unglamorous real estate sector gained about 6%, second only to the health care sector, which was on a marijuana high.

“That does show you how well real estate can diversify,” says Lee Goldman, lead manager of the actively managed First Asset Canadian REIT ETF, which invests primarily in Canadian real estate investment trusts. “Obviously it’s not going to outperform by that kind of magnitude in any particular year,” he adds, noting that real estate tends to be a slower-growth sector.

The diversification benefits are quantified in data published by BMO Asset Management Inc. (BMOAM), based on index returns for the 10 years ended Jan. 31. During that period, the Canadian real-estate sector had a correlation co-efficient of only 0.57 with the broad domestic stock market, and an even lower 0.28 with the broad bond market.  (Two asset classes with a co-efficient of 1.0 would be perfectly correlated.) “As part of a diversified portfolio, real estate does a very good job of further diversifying,” says Chris McHaney, director and portfolio manager for BMO ETFs, with Toronto-based BMOAM.

Along with providing regular income — for example, the BMO ETF’s annualized distribution yield is running at about 4.5% — real estate can also hedge against inflation. “Property prices rise with inflation,” says McHaney. “A lot of times, rents are indexed to inflation as well.”

Ten years into an equities bull market, there’s also a cyclical argument in favour of real estate. “It tends to do well in slow-growth environments, which is how we think 2019 is shaping up,” says Goldman, a senior vice-president with the Signature Global Asset Management division of Toronto-based CI Investments Inc. Working with him on the $408-million fund, the third largest ETF in its category and the only one with the top five-star Morningstar rating for risk-adjusted returns, are portfolio managers Kate MacDonald and Joshua Varghese.

Currently, there are a dozen Canadian-listed ETFs in the real estate equity category, with combined assets of about $2.7 billion. Nearly half of that is held in the $1.3-billion iShares S&P/TSX Capped REIT Index ETF. This fund is concentrated in just 16 REITs, with the top four holdings — led by a 15% weighting in Riocan REIT — accounting for half the portfolio.

Taking a more diversified approach is the $557-million BMO Equal Weight REITs Index ETF, the second largest. It currently has 19 holdings, which works out to just over 5% each, and is rebalanced semi-annually. “We want to provide broader exposure to the entire sector,” says BMO’s McHaney. “Taking an equal-weight approach does that, and reduces the stock-specific risk.”

Equal weighting lowers the average market capitalization of the ETF’s holdings to about $3.4 billion, says McHaney, versus roughly $5 billion for its larger iShares rival. This has positive implications for BMO’s performance, he says, since over the long term small-caps tend to outperform the broad market. Both the BMO and iShares ETFs currently have a four-star Morningtar rating for their past risk-adjusted performance.

Real estate is vulnerable to rising rates, especially toward the longer end of the yield curve. But as Goldman points out, the sector did quite well last year despite multiple interest-rate hikes by the U.S. Federal Reserve and the Bank of Canada. “Our thesis the last couple of years, when interest rates have been very low, has been that REITs can do well in a rising rate environment if rates are rising in a measured fashion […] and if they’re going up for the right reasons,” Goldman says. He notes that if rates are rising because the economy is strong, vacancies will probably be low and rents will rise.

Valuations in the REITs sector remain attractive, says Goldman, since generally they have been trading at discounts to their net asset values. He says that compares favourably with a long-term average of a 2-3% premium. Even with the strong start to 2019, “we’re still trading at a wider than historical discount to NAV.”

However, the extent of discounts — if any — depends on the real-estate subsector as well as the individual REIT. Goldman says industry-diversified REITs, as well as those that specialize in retail properties such as shopping malls, tend to trade at discounts. Two other subsectors — office and industrial — are mostly trading closer to their NAVs. The strongest subsector has been multi-family housing, such as apartments, with REITs recently fetching premiums to their NAVs.

More diversified than index-style REITs, the First Asset ETF usually holds about 35 securities, with the largest holding not much more than 5% of assets. Another differentiator is the greater flexibility afforded to the managers to hold smaller and mid-cap companies, and to invest up to 30% of the portfolio in non-Canadian real-estate securities.

Nor, despite the First Asset ETF’s name, are the managers restricted to holding only REITs. Current holdings include Toronto-based First Capital Realty Inc., a developer of retail properties in major urban markets that is pursuing conversion to a REIT. First Capital “is probably the best retail name in Canada in terms of the quality of real estate,” Goldman says.

Goldman says it’s hard to find a company that meets all of these criteria, but his best example of a Canadian one that comes close to doing so is Toronto-based Allied Properties REIT, known for its expertise in converting former industrial buildings to office space.

Though non-Canadian real estate securities made up only 3% of the portfolio at the end of January, the underlying property assets of First Asset’s holdings paint a different picture. Goldman estimates that the ETF’s portfolio probably has 25% exposure to the U.S. and another 5% to Europe. For example, the ETF holds Toronto-based Tricon Capital Group Inc., which is listed on the Toronto Stock Exchange but is mostly a U.S. housing play. “There are quite a few Canadian-listed REITs that have some U.S. exposure,” Goldman says.