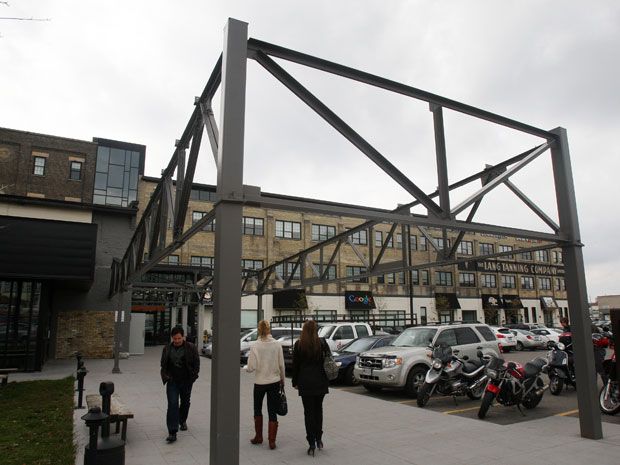 The exterior of the building at the Communitech Hub in the Tannery complex in Kitchener-Waterloo.

‘Unfortunately for us, Canada is no longer a hidden secret. We see most of our competitors up here (on) all the interesting deals we look at.’

U.S. buyout specialist KKR & Co. is actively making the rounds of tech hubs in Toronto, Waterloo and Vancouver, in the hopes of scoring the first Canadian investment for its Next Generation Technology Fund.

The New York-based firm is “actively looking at a handful of investment opportunities in Canada,” Dave Welsh, who leads the technology, media and telecommunications growth strategy within KKR’s private equity platform, told the Financial Post in a recent interview.

Welsh declined to provide details about which segment or segments of tech the private equity firm is exploring, or the size of a potential investment in a company — other than to say the sweet spot for the fund’s investments is between US$70 million and $150 million.

“KKR is spending time getting to know them because the firm strongly believes they are the types of businesses with which we would like to build long-term partnerships,” Welsh said.

On the timing or likelihood of a transaction coming together, Welsh would say only that there “isn’t yet a definitive timeline for these companies to raise additional capital.”

KKR kicked off the Next Generation tech fund in 2016 with a capital raise of US$711 million and a mission to make investments in North America, Europe and Israel. A recent priority has been to expand the fund’s reach outside Silicon Valley, where intense competition has driven up valuations.

That there has not been an investment in Canada to this point is “not for lack of trying,” said Welsh, who is based in San Francisco but travelled to Toronto last month to attend the inaugural Collision tech conference.

“We have actually put a couple of term sheets down on companies, but we didn’t win the business, somebody overbid us,” he said. “And we’ve looked at a lot.”

He added that members of his team continue to spend time in Waterloo, Toronto and Vancouver, and said they are on the hunt for proven technologies that are beyond the startup phase and can be scaled.

“We will make investments. It’s just going be a matter of finding the right thing at the right time,” Welsh said.

Taking a slow and steady approach isn’t out of step for the technology fund, which has a portfolio of 11 companies so far. At least one, the ride-sharing venture Lyft Inc., is a household name.

Now valued at more than US$16 billion, Lyft got off to a rocky start as a public company when its shares dipped well below the offering price following its March IPO. But Welsh, whose fund was an early investor, says he aims to block out such “noise” and focus on a long-term view that was years in the making.

“We still are very bullish on the long-term prospects of the business notwithstanding all the noise in the public markets,” he said, calling the IPO an event rather than a destination.

The buyout specialist started looking at Lyft about five years ago and held off investing until 2017, as part of the ride-sharing platform’s US$600 million series G round of funding.

“We were familiar with the company way before it was a household name. We first looked at Lyft … probably in 2014,” Welsh said.

“And honestly we looked at it a couple of times and didn’t invest because we thought that there were some fundamental issues we wanted to see resolved before we would invest.”

Among those were regulatory questions about how ride-sharing ventures would be categorized, and pushback from the taxi lobby, he said.

The “catalyst” to the ultimate investment, though, was a belief that the business could reach scale and ultimately become profitable.

“We wanted to get our own confidence that on a market-by-market basis, you can be a profitable business. And it took them time and for us to get comfortable with that, but we did,” said Welsh.

KKR’s horizon for investments in the Next Generation tech fund is typically between four and six years, and the aim is to “help build substantial value” in that time.

“Our whole philosophy is to work with teams and companies where they actually want to build something with us for several years,” Welsh said.

“And where they believe, and we do too, that the (global) resources KKR has … could really help them not just stay the course where they are but hopefully increase the trajectory of their business during that time.”

The private equity firm’s experience and expertise can be applied to help a company shape its procurement program, for example, or advise on entering new geographies, he said.

So far, the Next Generation tech fund is focusing on software and internet-related businesses, with sectors including travel, transportation and cyber-security.

As for the prospects in Canada, Welsh said the growing tech hubs are drawing interest not only from KKR but, increasingly, from the private equity firm’s U.S. competitors.

“We firmly believe there is a growing and very interesting technology opportunity both in and around Toronto, obviously, but also in the west, in Vancouver, and other areas,” he said.

“Unfortunately for us, Canada is no longer a hidden secret. We see most of our competitors up here (on) all the interesting deals we look at.”