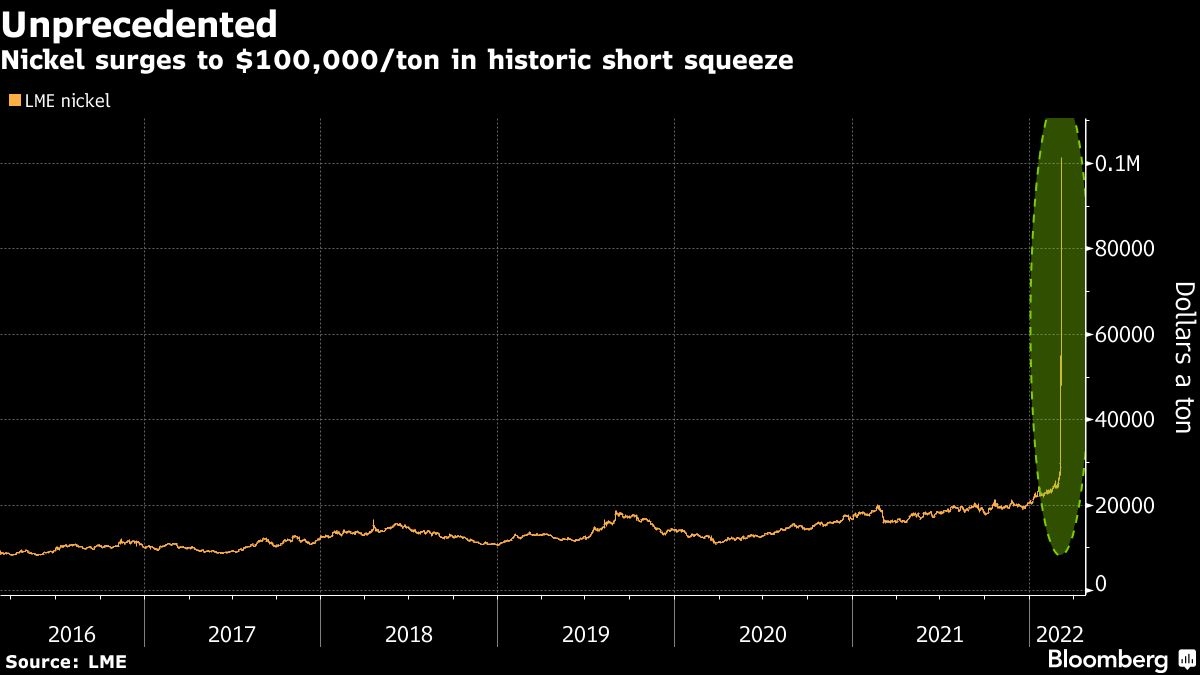 The London Metal Exchange suspended trading in its nickel market after an unprecedented price spike left brokers struggling to pay margin calls against unprofitable short positions, in a massive squeeze that has embroiled the largest nickel producer as well as a major Chinese bank.

Nickel, used in stainless steel and electric-vehicle batteries, surged as much as 250 per cent in two days to trade briefly above US$100,000 a ton early Tuesday. The frenzied move — the largest-ever on the LME — came as investors and industrial users who had sold the metal scrambled to buy the contracts back after prices initially rallied on concerns about supplies from Russia.

A Chinese tycoon who built a massive short position in the nickel market is facing billions of dollars in mark-to-market losses as a result of the surge in prices, according to people familiar with the matter.

Activity in the nickel market was suspended as trading got underway in London on Tuesday, and the LME later said it would cancel all nickel transactions that had taken place earlier in the day.

The debacle will raise memories of the LME’s darkest period, the “Tin Crisis” of 1985, which saw the exchange suspend trading in the metal for four years and pushed many brokers out of business. That was driven by the collapse of the International Tin Council, a body backed by 22 governments that fell apart when it could no longer keep propping up prices.

“This is second only to the tin crisis,” said Malcolm Freeman, a broker at Kingdom Futures who began his career on the LME in 1974. Suspending trading “was the right thing to do.”

Traders and brokers must deposit cash and securities, known as margin, on a regular basis to cover potential losses on their positions. If the market moves against those positions, they receive a “margin call” requesting further funds — and if they fail to pay, they can be forced to close their position.

Chinese entrepreneur Xiang Guangda — known as “Big Shot” — has for months held a large short position on the LME through his company Tsingshan Holding Group Co., which is the world’s largest nickel and stainless steel producer, according to people familiar with the matter. In recent days, Tsingshan has been under growing pressure from its brokers to meet margin calls on that position — a market dynamic which has helped to drive prices ever higher, the people said.

A unit of China Construction Bank Corp., which is one of Tsingshan’s brokers, was given additional time by the LME to pay hundreds of millions of dollars of margin calls it missed Monday. The necessary payment has now been made, a person familiar with the matter said Tuesday, requesting anonymity because the details aren’t public.

CCB International Holdings didn’t immediately respond to requests for comment, while Tsingshan representatives had no immediate comment on Tuesday.

While giving the LME and its members time to restore order, the historic decision to close the market and cancel Tuesday’s trades quickly attracted controversy. Alex Gerko, the founder of XTX Markets, a leading electronic market-maker on the bourse, said on Twitter, that the move will mean “the end of the market”. In a subsequently deleted tweet, he posted a chart suggesting the firm had seen a sharp slump in profits during the rally in nickel prices, but wrote that “you just can’t do what LME did”.

The LME said it was considering “a possible multi-day closure, given the geopolitical situation which underlies recent price moves.” In the meantime, nickel prices continued to rally on the Shanghai Futures Exchange, with prices hitting the upper daily trading limit as the bourse’s evening session got underway on Tuesday. Typically, there’s a highly liquid arbitrage trade between the two exchanges.

“I wonder how people running arb between SHFE and LME feel now,” XTX’s Gerko said in a separate tweet.

The suspension is for at least the remainder of Tuesday. The LME said it would calculate margin calls “for the present time” on the basis of Monday’s closing price of around US$48,000.

Nickel had pared some gains to trade 66 per cent higher at US$80,000 a ton before the suspension. Other metals on the LME declined after the announcement.

A full default could have calamitous knock-on effects for the exchange, its members, and industrial users around the world who rely on its benchmark prices. The last time the bourse’s clearinghouse declared a default was in 2011, when ring-dealing member MF Global collapsed.

The LME initially announced rule changes late Monday in response to a daily spike of as much of 90 per cent, allowing traders to defer delivery obligations on all its main contracts, including nickel — in an unusual shift for a 145-year-old institution that touts itself as the “market of last resort” for metals.

However, the move failed to address the key driver behind the squeeze — that market participants with short positions were being forced to close them out because they couldn’t meet margin calls.

Nickel was already rallying on tight supplies even before Russia’s invasion of Ukraine, which has sharpened fears of sweeping commodity shortages. Higher nickel prices, if sustained, threaten to ratchet up costs for electric-vehicle batteries and complicate the energy transition. Russia produces 17 per cent of the world’s top-grade nickel.

A spokesperson for Trafigura, one of the top physical traders of the metal, said it supported the LME’s decision.

Nickel prices were quoted at US$80,000 a ton as trading was suspended. Other metals pared or erased gains after the announcement. Aluminum dropped as much as 7 per cent to US$3,480 a ton, the biggest decline since 2018.