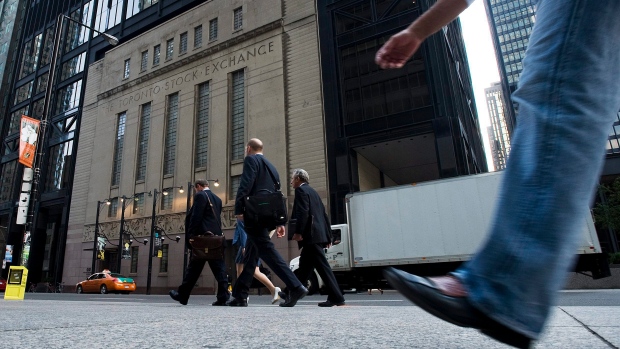 The S&P/TSX composite index closed down 70.84 points to 16,336.45, a day after rising to within one percentage point of an all-time high.

North American markets were pressured by news that the IMF has lowered its world growth assumption to 3.3 per cent in 2019, down from an earlier forecast of 3.5 per cent growth.

IMF economists downgraded their outlook for U.S. growth to 2.3 per cent from 2.9 per cent in 2018 and lowered Canada’s outlook to 1.5 per cent from its prior guidance of 1.9 per cent.

A further escalation of trade tensions and a no-deal Brexit withdrawal of Britain from the European Union could further weaken growth, the IMF warned.

“The potential remains for sharp deterioration in market sentiment, which would imply portfolio reallocations away from risk assets, wider spreads over safe haven securities, and generally tighter financial conditions, especially for vulnerable economies,” said the report.

Trade uncertainty grew after U.S. President Donald Trump warned that he will impose tariffs on US$11.2 billion worth of EU goods.

“The EU has taken advantage of the U.S. on trade for many years. It will soon stop!” he tweeted.

Oil was off a little on the day, but it’s up more than 40 per cent since trading last year at US$45, said Dominique Barker, portfolio manager at CIBC Asset Management.

“What is astounding to everyone in the market is the price of oil continues to grind higher but oil stocks are up modestly. They are trading at extremely low levels in terms of valuation,” she said in an interview.

The key energy sector was the third-worst performer on the day, after health care and telecommunications. Encana Corp. fell 4.3 per cent, followed by Frontera Energy Corp. and Suncor Energy Inc.

Technology and consumer staples were the only two of 11 major sectors to gain.

Barker said the markets are taking a breather in the face of the many risks out there, including some that have faded away but could resurface.

“There’s still lots of room for more breaths to be taken, meaning I think we’re going to continue to see some lacklustreness in the near term.”

2 TSX Stocks That Could Benefit From a Gold Rally