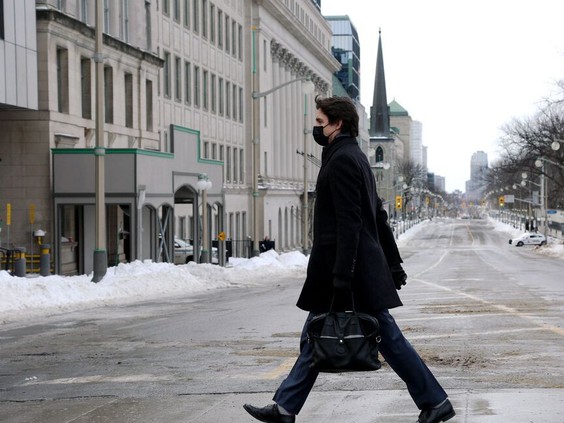 The NDP voted in favour alongside the minority Liberals, with some expressing concerns a ‘no’ vote would have toppled the government

OTTAWA — The House of Commons on Monday night approved the extraordinary and temporary measures in the Emergencies Act, heeding Prime Minister Justin Trudeau’s warning that the “state of emergency is not over,” even though police ended a three-week occupation in Ottawa and reopened border points to the U.S.

The motion to confirm the declaration of emergency passed 185-151, with the New Democrats voting in favour alongside the minority Liberal government.

The Conservatives and the Bloc Québécois opposed it.

The vote to approve the measures will keep them in place until mid-March at the latest and the Senate must also vote on the government’s request.

At any point, the Senate, House or government could pull support and the extraordinary powers stemming from the emergencies law would be torn up.

Speaking to reporters on Monday before the vote, Trudeau made it clear that there are still protesters and truckers awaiting an opportunity to come back to Ottawa, some of which are in the towns of Arnprior and Embrun, respectively 70 and 45 kilometres away from Ottawa.

Trudeau, who invoked the Act last week, stressed his government does not want to keep it in place “a single day longer than necessary.”

“But even though the blockades are lifted across border openings right now, even though things seem to be resolving very well in Ottawa, this state of emergency is not over. There continues to be real concerns about the coming days,” he said.

NDP Leader Jagmeet Singh echoed these concerns in a subsequent press conference. He said some protesters waiting in the surrounding areas of Ottawa “need to be cleared out” and alleged that some supporters of the occupation are “still hiding in Ottawa itself.”

Singh said his party was fully prepared to pull its support and to trigger a vote on the necessity of the Emergencies Act — which expands police powers and enables banks to freeze accounts linked to supporters of the protests — once it would not longer be necessary.

One of the factors to take into consideration to end the emergency measures, he said, would be that these protesters have left the nation’s capital and would not come back.

But some were expressing concerns about the Emergencies Act itself, including one Liberal backbencher who said he would have voted against it if he didn’t fear it would topple the government. He said it was a confidence vote, which could trigger an election if the government failed to get it passed.

“The disagreement I’ve expressed here does not amount to non confidence, and I have no interest in an election at this time,” said Liberal MP Nathaniel Erskine-Smith in a speech.

Just before the vote, Conservative House leader John Brassard asked if it was a confidence vote. Government House leader Mark Holland shrugged off the question and said “it’s time to vote.”

Singh said it was also his interpretation that the vote would be deemed a confidence vote.

“We understood absolutely that we do not want to trigger an election. That would be the worst thing to do in this crisis,” said Singh in a press conference.

“We would never allow that to happen,” he added.

Trudeau did not say clearly if the vote was a confidence vote, but his answers to reporters’ questions earlier in the day gave a clear indication this would be the case.

“I can’t imagine anyone voting against this bill as expressing anything other than a deep mistrust in the government’s ability to keep Canadians safe at an extraordinarily important time,” said Trudeau.

Conservatives and the Bloc Quebecois argued the Emergencies Act was not necessary in the first place. They accused the government of a power grab to force a majority vote on extending the measures.

“It would seem that the prime minister is strong-arming his backbench and the NDP to vote in his favour by threatening an election,” accused Conservative Public Safety critic Raquel Dancho.

“The prime minister is invoking the most coercitive of the legal arsenal and because he’s afraid to crash, he’s threatening to impose the constraint of making this a confidence vote,” added Bloc Leader Yves-François Blanchet.

Right after the vote, interim Conservative leader Candice Bergen filed a motion to revoke the Emergencies Act signed by more than 20 MPs of the Conservative Party. It will be debated next week.

“Liberal and NDP MPs will need to explain to Canadians why they are continuing to enforce a national state of emergency that gives the federal government far-reaching powers and authority,” she said.

The Emergencies Act was invoked last week to put an end to the occupation in the streets of Ottawa by truckers. It granted extraordinary powers, effective immediately, to the federal government to help police forces.

As of Monday, Wellington Street in front of Parliament was clear of all trucks, vehicles, posters, camping gear and other items brought by protesters.

Police forces had installed barricades and checkpoints preventing passage in the parliamentary precinct in Ottawa for anyone arriving by car or by foot. Only those who live and work in the area could access it, and they had to show proof to do so.